It began with six U.S. warships shelling two Iranian oil platforms in the southern Persian Gulf in retaliation for Tehran’s alleged mining of international waters. But before the shooting was over last Monday, U.S. and Iranian forces had fought a fierce naval battle across 400 miles of the Gulf—and the Iranians had suffered by far the most. For the loss of one helicopter gunship and its two-man crew, U.S. ships and planes sank or severely damaged six Iranian vessels, including two frigates, killing 44 Iranians and crippling Tehran’s small navy. But for all the spectacular action at sea, Iran may have suffered its most serious setback on land. In a 36-hour blitz launched on April 17, Iraqi troops overran the Fao Peninsula at the northern tip of the Gulf, recapturing strategic territory seized two years ago by the Iranians. Said Abdul Amir al-Anbari, Iraq’s ambassador in Washington: “It is a major turning point in the war.”

That may be an overstatement, but Iran had undoubtedly sustained a stunning double defeat. “Time is not

on our side anymore,” Iranian parliamentary speaker Ali Akbar Hashemi Rafsanjani admitted on Tehran radio. Rafsanjani charged that both the land and sea assaults were part of an international strategy against Iran launched by “anti-Islamic, arrogant powers.” Specifically, the Iranians claimed that Iraq was aided in its Fao offensive by U.S. helicopters and by its access to Kuwaiti staging areas. And although all parties denied the charges, Tehran vowed revenge against Baghdad, Kuwait and Washington.

To make matters worse for Tehran, the 15-day hijacking of Kuwait Airways Flight 422 ended without the hijackers achieving their goal of freeing 17 Shiite Moslem terrorists imprisoned in Kuwait (see box). Despite Iranian denials, the hijackers were widely believed to have ties to Tehran, and the unflinching response of Kuwait—an Iraqi ally—seemed likely to boost the morale of anti-Iranian forces in the region.

In Washington, officials denied any link between the U.S. naval action and

the Iraqi’s Fao offensive. They also tried to dispel fears that the Gulf fighting —the most serious since Washington sent its task force to the area last July to escort reflagged Kuwaiti vessels—might escalate. President Ronald Reagan, briefing congressional leaders, stressed that “we have completed these self-defence actions and consider the matter closed.” And the U.S. actions won broad support in Congress and among America’s allies. In Ottawa, External Affairs Minister Joe Clark called Washington’s response fully warranted. At week’s end, a Pentagon spokesman announced that 13 U.S. warships would sail for the Gulf this week—but without saying if those were reinforcements or replacements.

The episode effectively began on April 14, when the U.S. frigate Samuel B. Roberts, patrolling in the southern Gulf, was seriously damaged by a mine, which also wounded 10 U.S. sailors. Administration officials, blaming Iran, met at the White House the following weekend to plan a response. Administration sources told Maclean’s

that Iran’s alleged involvement in the Kuwait Airways hijacking was a factor in the decision to punish Tehran.

On Monday morning U.S. ships sailed into action. At 8 a.m. local time three American warships ordered an Iranian crew to abandon the Sassan oil rig in the southern Gulf, while another three issued the same demand at the Sirri rig. After the platforms had been shelled, marines boarded them, attached explosives and blew them up. After a similar U.S. action last October the Iranians failed to retaliate. But last week—just three hours after the U.S. strike began —three Iranian speedboats fired on a U.S. helicopter near the Sirri rig, and other Iranian boats attacked an American-flagged supply ship. Shortly after noon the 275-ton Iranian patrol boat Joshan approached the U.S. cruiser Wainwright near the Sirri platform and, ignoring repeated warnings, fired a missile. The Wainwright and the nearby USS Simpson responded by sinking the Joshan with missiles of their own.

A few minutes later American A-6 jets hit three Iranian speedboats, which had been firing at an Americanoperated rig in the Mubarak oilfield;

one boat sank, and the others were badly damaged. The Pentagon later reported that, after the A-6 pilots had sought permission to blast the speedboats, the request was relayed through the Pentagon directly to Reagan—and the President’s order to go ahead came back in just three minutes. Next, the Iranians threw two of their four frigates into action—British-built vessels purchased by Shah Mohammed Reza Pahlavi before his overthrow in 1979. Shortly after 3 p.m. the 1,540-ton Sahand fired upon U.S. ships in the Strait of Hormuz. American attack jets struck back with Harpoon missiles and laser-guided bombs, and, within minutes, the Sahand was sinking. Two hours later the Sahand’s sister ship Sabalan also fired on U.S. forces and was disabled by a laser-guided bomb.

After the missile war subsided, U.S. officials acknowledged that one of their Cobra helicopters had not returned to ship and began a massive search for it. The Iranian military claimed to have shot it down. Meanwhile, in Washington, Reagan told a group of businessmen that the Iranians must know that “if they threaten us, they will pay a price.” In general,

though, administration officials seemed anxious to end the shooting war for the moment, discounting eyewitness reports that the Iranians had fired Chinese-made Silkworm missiles at U.S. ships. Washington had vowed to destroy Iranian missile sites if the Silkworms were used.

For Tehran, the loss of the Fao Peninsula was even more devastating than the setback at sea. The Iranians had gained control of the strategically important tongue of territory at the head of the Gulf in February, 1986, using it as a Silkworm launching site and a base for attacks on the Iraqi city of Basra 90 km to the north. Many military analysts doubted that the Iraqis, who have assumed a largely defensive posture in the 7 V2 -year-old war, had the will—or the skill—to take the peninsula back.

Details of the successful Iraqi offensive remained sketchy at week’s end. But according to most accounts, Iraq’s elite Presidential Guards and the 7th Army Corps launched a two-pronged assault from positions about 15 km north of Fao. Lt.-Gen. Maher Abd alRasheed, the 7th Army commander, later claimed that he had expected to

take four or five days to achieve his objectives. But Iraqi infantry and tanks—backed by attack helicopters— broke through the surprised Iranian defences so quickly that the Iranians were sent fleeing east across the Shatt al-Arab waterway in 36 hours. After an official Iraqi communiqué announced that “your sons have entered the dear town of Fao, liberating its soil from the filth of the invaders,” Iraqis staged a wild celebration in the Baghdad streets. And the following day journalists touring the area reported that the road to Fao was lined with Iranian corpses. About 200 Iranian prisoners of war sat silently in a large yard, and abandoned Iranian bunkers, tanks and machine-guns were everywhere.

At the same time, Tehran charged that eight U.S. helicopters had fired on their troops during the Iraqi offensive, and that Kuwait had allowed Iraqi forces to use its Bubiyan Island as a base for helicopter sorties. The Iranians vowed swift retribution against what one spokesman called the “Baghdad-Kuwait-Washington axis”—and launched a Soviet-made Scud missile at a Kuwaiti oilfield, missing the mark. On Friday the Iraqis reported that they had sunk a medium-sized Iranian vessel in the Gulf. And the U.S. navy reported destroying five more mines, bringing to 13 the total detonated since one struck the Samuel Roberts.

Despite their losses, some observers speculated that the Iranians would strike back. The war, with its seemingly endless loss of life and bombing of cities—as well as the Iraqis’ use of poison gas—has put enormous pressure on the regime of Ayatollah Ruholla Khomeini. Shahrough Akhavi, professor of government at the University of South Carolina, predicted last week that Iran would launch terrorist attacks against American military targets in Europe or Asia. “I think the Iranians will try to Americanize the war with Iraq,” said Akhavi.

Indeed, some U.S. analysts questioned whether Washington could afford to provoke the hard-pressed Iranians any further. “We are at a crossover point right now,” warned James Bill, director of the Centre for International Studies at the College of William and Mary in Williamsburg, Va. “If America kills large numbers of Iranians and gets into a deeper conflict, there will be American deaths. America will bleed. This is not Grenada out there.” As the world waited for the Iranians to retaliate, the possibility of an even larger Gulf War—however unlikely—continued to loom. 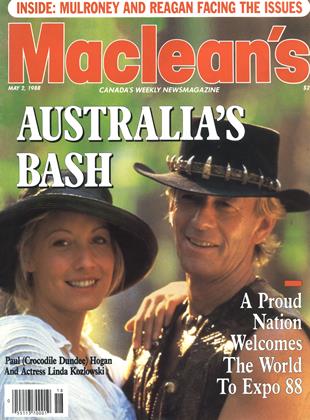