Last July, when the federal government passed its multiculturalism act, Gerry Weiner, the minister of state for multiculturalism, said that it made Canada “in essence a microcosm of the world.” In ensuring legal protection for the diversity of cultures and languages in the country, the act, said Weiner, “allows every person the freedom to cherish and maintain his or her own heritage.” But when the fifth annual Maclean’sj Decima poll tested attitudes on immigration, racism and multiculturalism, it found that a majority of respondents were deeply uneasy about the development of Canada as a cultural mosaic distinct from the American melting pot to the south. Fully 58 per cent said that they wanted new immigrants to “integrate with the Canadian culture” rather than maintain their different cultures after they arrive. Only 38 per cent agreed that the government should continue encouraging immigrants to preserve their heritage.

According to Allan Gregg, chairman of Decima Research Ltd., Canadians like to think of themselves as people who have historically welcomed newcomers from every country. Indeed, when asked two different ways, the poll respondents replied overwhelmingly (79 per cent and 82 per cent) that Canada should not select immigrants on the basis of country of origin. But what Gregg called a schizophrenic attitude toward immigration becomes visible when Canadians are asked pointed questions about whether newcomers should try harder to adapt. “The respondents are saying that while it is lovely that we have all these races, they sure wish that they would not make so much trouble or be so distinct,” said Gregg. Indeed, he added that Decima’s polling has convinced him that “you do not have to scratch too deep to find racist views.” Gregg claims that the opposition to multiculturalism has arisen from changing trends in immigration, as visible minorities have become the majority of immigrants to Canada. Seventy per cent of immigrants are now non-Europeans. Said Gregg: “You can change a funny European accent but you cannot change a black or yellow face.”

But the federal government is committed to a program of encouraging cultural diversification in Canada. Weiner recently announced that $62 million had been added to $130 million already designated to encourage multiculturalism over the next five years. The project ranges from Chinese-language training and Hungarian folk-dancing events to promoting better race relations. By 1992, the minister of state for multiculturalism will command a $4 2-million annual budget to continue such programs. Shirley Serafini, assistant undersecretary of state for multiculturalism, said that the Maclean’s/Decima poll might have found greater support for multiculturalism if it had explained that the ministry is also working toward integration of immigrants. Said Serafini: “If there is a misconception generally about multiculturalism, it is that we force immigrants to remain different. The act simply acknowledges the freedom of people to choose.”

But many of the poll participants who agreed to a followup interview with Maclean’s attributed their melting-pot approach to concerns that multicultural policies ghettoize ethnic groups, discourage adaptation and can lead to racial violence. Paul Albert, 32, a woodcraftsman in Vernon, B.C., claimed that unrest in the province’s Sikh community and gang-related violence among Vietnamese in Vancouver’s Gastown have particularly influenced his views. He added,

“When you see East Indians in Vancouver waving placards about political events in India, you want to ask them what they are doing in Canada.” Garry Briggs, 43, a Toronto cabinetmaker, said that multiculturalism encourages a potentially explosive clustering of ethnic groups in separate neighborhoods. Said Briggs: “My greatest fear is that Toronto will become another Beirut.”

For her part, poultry farmer Karin Grillenmeier, 48, who emigrated from West Germany to Mount Forest, Ont., 100 km northwest of Toronto, in 1961, said that she would not object to immigrants practising their own culture at home. But, she dedared, “on the outside we must be one. I believe that when you are in Rome, do as the Romans do.”

According to the poll results, support for encouraging new immigrants to integrate is highest among Canadians with the lowest education level (72 per cent of those with only an elementary-school education). But a relatively high 52 per cent of university graduates also favored integration. People who live in rural areas are more inclined than city dwellers to prefer integration (61 per cent), as are older Canadians (73 per cent of people aged 55 to 64). Ontario was the region showing the most support for multiculturalism at 43 per cent— with 46 per cent in Metropolitan Toronto. In contrast, the lowest region was Quebec at 32 per cent. In between were British Columbia and the Prairies at 37 per cent each and the Atlantic provinces at 41 per cent. And by party, integration was most popular with respondents who said they were Conservatives (61 per cent), but majorities of Liberals and New Democrats (57 per cent and 53 per cent respectively) were also in favor of integration.

Among all ethnic groups across Canada, the greatest support for integration of immigrants came from those who had British, French, Irish and Northern European backgrounds (58, 62, 63 and 64 per cent respectively). But the poll revealed differences among people of French or French-Canadian ancestry, depending on where they lived. Those living in Quebec favored integration by 67 per cent. But outside Quebec, a bare majority of respondents with French backgrounds preferred multiculturalism—a policy that helps their culture to survive in a predominantly English-speaking society. The strong pro-integration contingent in Quebec may reflect Quebecers’ traditional fear of diluting their own culture with diverse ethnic influences. Said Roger Levert, 49, a Valleyfield, Que., construction worker, after participating in the poll: “If I move to Japan, I have to submit to their culture.”

Similarly, some opposition to multiculturalism likely arose from fears about the fragility of the Canadian identity, particularly with the onset of a free trade relationship with the United States. Said Irving Abella, a York University historian specializing in immigration and labor history: “There is a sense of disquietude about allowing large numbers of unintegrated people in just at this time.” Indeed, 56 per cent of those who, in response to another question, said that free trade is likely to weaken Canada’s ability to preserve its unique identity, also wanted cultural integration.

On the other hand, the most vigorous support for multiculturalism came from respondents from visible minorities (53 per cent), followed by those with Mediterranean ancestry (49 per cent). Chander Sharma, 30, a landed immigrant who arrived in Canada from India three years ago, claimed that multiculturalism is not a barrier to integration. In an interview, he said that he is trying to blend into Canadian society while keeping his native culture alive at home.

Every day, Sharma and his wife and two children retire to a Hindu temple in the basement of their Toronto home. The room is decorated with religious sculpture and pictures of the gods Rama and Krishna. His wife, Anita, wears a sari, the customary dress of Indian women, and has a red bindi dot on her forehead, symbolizing that she is married. But outside the house, Sharma has tried to mix with other cultures. An accountant, he works for a non-Indian firm and he has donated his accounting services to an advocacy society that represents poor, elderly and abused citizens. Said Sharma: “A Canadian is anyone who is contributing to make Canada a better place.”

When the poll switched to questions about how to select immigrants, respondents exhibited only minimal racial bias. When asked how to limit immigration to Canada, only eight per cent (117 out of 1,400 people) agreed that selecting people from certain countries was the best approach, while eight per cent also said that immigration should be limited to people with a fair amount of money. But a strong 82 per cent said that the selection should rely on criteria other than country of origin or wealth. Of all regions, the Prairies was least willing to consider country of origin (only five per cent compared with 12 per cent in Quebec).

In a follow-up question, respondents were asked whether Canada should ignore country of origin when selecting immigrants, or, if not, accept them from any of nine specific countries

or regions. An overwhelming 79 per cent said that Canada should ignore national origin. But 263 people (19 per cent) specified one or more of the countries or regions. Of those, most showed a preference for England (67 per cent) and France (65 per cent), followed by Italy, Germany and Japan (56 per cent) and Hong Kong (45 per cent). Indians, Pakistanis and people from the Caribbean were the least preferred, chosen about half as often as the Europeans. Not surprisingly, most people who chose on the basis of country favored their own fellow countrymen.

In follow-up interviews, some respondents spoke enthusiastically about the merits of multicultr alism. One was Alan Woodworth, 28, an engineer in a steam plant at the Dryden District Hospital in Northern Ontario, whose mother taught a group of Vietnamese boat people how to speak English. “I am for multiculturalism,” he said. “The Vietnamese cooked us wonderful traditional meals and they are so friendly and respectable.” Diana Ryel, 38, said that she and her family immigrated to Toronto from Westfield, N.J., in March, 1987, largely because of Canada’s multiculturalism policy. “I see Canada as more successful in respecting people’s differences and I do not run into the prejudices that I saw in the States,” said Ryel.

Poll participant David Parrott, a 20-year-old waiter at a St-Hubert chicken restaurant in St. John’s, Nfld., displayed a particular perspective in supporting multiculturalism. Said Parrott: “To maintain your culture is to integrate into Canada. To me, the essence of Canada is that you can wake up in the morning and hear bagpipes in the backyard next door, or that in a St. John’s pub two guys can start a fight about Northern Ireland even though they have never been there in their lives.” But the poll suggests that, unlike Parrott, many Canadians do not believe that immigrants should be encouraged to keep their various cultures alive, let alone fight over them.

IMMIGRANTS SHOULD BE ENCOURAGED TO: Retain their own ways Adopt Canadian culture 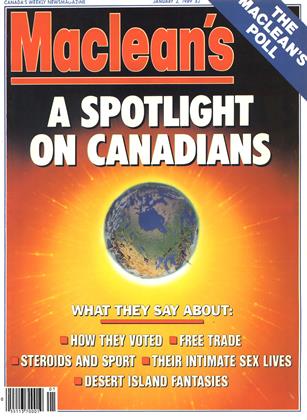