Statistics show that Canadians are among the most waste-producing people on earth. On average, they generate one ton of refuse per capita annually. The problem of waste disposal affects almost all major urban centres across the country. But nowhere is it more severe than in Metropolitan Toronto and four surrounding municipalities. Indeed, the problems of the area’s 3.7 million residents represent a potentially dark future for the rest of Canada. Landfill sites in Metro Toronto and the regional municipalities around it are nearly full, and not a single new dump is currently being developed. Because the municipal politicians have

been unable to solve the difficulty, Ontario’s environment ministry is now seeking privatesector solutions. So far, the ministry has received dozens of proposals from companies who foresee a financial windfall in garbage. Said Nigel Guilford, president of Burlington, Ont.-based Laidlaw Waste Systems Ltd.: “The potential is almost limitless.”

The commercial potential of garbage dumps has soared over the past year because of steep increases in the so-called municipal tipping fees, which are levied against waste from businesses and industries. Last May, Toronto’s fees jumped to $50 per ton from $18 per ton. Next month, Metro Toronto is expected to approve another increase to $85 per ton. The municipalities contend that fee increases will force business and industry to reduce their garbage disposal, which would save space in the landfill sites. At the same time, the municipalities are trying to encourage residential recycling and are desperately searching for new dump sites.

However, the private sector has developed a number of plans to solve the garbage disposal problem—and to earn billions of dollars in the process. For one, Canadian National Railways Ltd. of Montreal wants to haul the region’s garbage to gigantic compost sites; other firms propose to empty it into limestone quarries, burn it to produce energy and even turn it into logs that can be used in fireplaces.

Garbage disposal has been a growing problem within the Greater Toronto region, which covers a 2,710-squaremile area, for more than a decade. According to municipal and private-sector experts, the area is now facing a critical garbage crisis because new dumps cannot possibly be developed fast enough to replace the current ones that are quickly filling up. Said Guilford: “Nobody is going to get it done before the existing sites are full. It’s self-evident.”

Metro Toronto shares two dumps with the neighboring regions of Durham and York, said Ian McKerracher, director of refuse for the Metro works department. One is scheduled to be closed in May, 1990, the other in 1993. Peel Region, which includes the nearby city of Mis| sissauga, will have filled its ; only dump by April, 1990, I said Richard Frost, the retd gion’s chief administrative ofo ficer. The nearby Halton Reiz gion, which encompasses the 1/1 cities of Oakville and Burlington, already spends nearly $5 million annually shipping 90,000 tons of burnable garbage to incinerators in Niagara Falls, N.Y., because its dump is almost full.

Within Metro Toronto and its four surrounding regional municipalities, Laidlaw is one of only two private companies with landfill proposals before the provincial government.

Guilford said that the company wants to expand a 50-acre dump it owns in Durham Region to 200 acres, which would ease the current crisis.

After holding public meetings to explain the plan, company officials hope to argue their case by year-end before a two-member provincial tribunal that will rule on both a zoning change and environmental issues.

If the company succeeds, the landfill could produce windfall revenues. Based on tipping fees of $85 a ton and a capacity of eight million tons,

Laidlaw stands to earn $680 million from the operation. Indeed, demand is so great that Guilford said, “If there were a permitted site in the region, people would be beating down our doors to sign contracts to use it.”

The potential bonanza from garbage has also

attracted Toronto businessman Stephen Mernick, who gained widespread attention in October by paying $139 million for the real estate assets of the Charlotte, N.C.-based PTL Ministries, which was once controlled by disgraced televangelists Jim and Tammy Bakker.

In the spring of 1988, Mernick quietly paid $3 million for a privately owned 50-acre landfill site at Innisfil Township, with a population of 14,529, 70 km north of Toronto. David Reddy, operations manager of Mernick’s Spider Maple Lift Co. Ltd., says that another Memick-owned company is experimenting with a Swiss process that turns building debris into logs for fireplaces, but Reddy was unable to say when the plan would be ready.

Because landfill proposals are politically explosive, governments and the private sector are now searching for innovative alternatives. Maclean ’shas learned that a consortium led by Laidlaw and its major shareholder, Montrealbased CP Ltd., is developing plans to build a huge recycling plant somewhere near Toronto. Garbage would be hauled by truck to a central transfer point and loaded onto railcars for shipment to a plant. The garbage would be separated for processing, and nonrecyclable material, including concrete and asphalt, would end up in landfill sites. Provincial government officials have nicknamed it the “Golden Horseshoe Megaproject,” based on its reputed size. And Guilford and consortium lawyer Harold Poch declined to detail their plans.

Another innovative proposal is being developed jointly by Canadian National and environmental engineer Stephen Janes of Waterloo, Ont. Janes, who first designed the system, calls his plan Norwaste, which is short for New Options Regarding Waste. He says that he wants to build a plant in southern Ontario to recycle glass, metal, paper, wood and other products that can be reused. Any biodegradable waste would be loaded on railcars and shipped to designated sites in Northern Ontario to be used as compost. Janes pointed out that mine tailings cover hundreds of square miles of land in the northern region. He added that trees and other types of vegetation could be planted over the tailings if they were first covered by compost from biodegradable material. Janes contends that he has located more than 24 potential sites that meet his basic criterion of being within a 12-hour train trip from Toronto. Said Janes: “It’s a completely new approach to dealing with waste.”

Until a permanent solution can be found, Metro Toronto is still attempting to stretch out the life of its current garbage dumps by reducing the amount of waste received. McKerracher said that the ambitious target is a one-

third reduction in annual volume by the end of 1990. In recent years, the amount of refuse produced had been growing by about eight per cent annually. But with the sharp rise in tipping fees last year, the flow of garbage slowed and actually remained unchanged between 1987 and 1988, said McKerracher.

In October, a three-member provincial tribunal recommended that Montreal-based SNC Group, an engineering and construction company, be allowed to build an energy-from-waste facility within the region of Peel. SNC project manager Alexander Ross said that the $32million plant would be built in the city of Brampton. SNC would accept about 400 tons of garbage a day. Workers remove metal and other noncombustible materials, and the remaining paper, plastics and cardboard waste would be fed into incinerators at 1,000°C. The heat would be used to produce steam, which would drive a turbine generator.

Ross said that the facility would be able to generate enough electricity to light 5,000 homes. Electricity would be sold to Ontario Hydro, but the main source of revenue would be from tipping fees charged to the municipality of Peel for dumping its garbage. Ross estimated that the fees will likely range from $40 per ton to $50 per ton. “A few years ago, that would have been ridiculous,” he said. “But the cost of landfilling is rising astronomically. That’s what makes energy from waste attractive.”

One way to avoid creating new dumps may be to use old gravel pits and limestone quarries as landfill sites. A consortium called Reclamation Systems Inc. has proposed one of the largest quarry projects. The consortium wants to lease 175 acres of a worked-out limestone quarry from Brampton, Ont.-based United Aggregates Ltd. to use as a dump. The quarry averages 70 feet and could accommodate 20 million tons of garbage over a 30-year period, said Walter Graziani, president of Milton, Ont.based Comcor Waste Systems Ltd., an environmental consulting company and managing partner of the consortium. The project could go before a provincial environmental tribunal by early 1990.

After years of unsuccessful attempts to develop new landfill sites, most government and private-sector experts express doubt that the municipalities can solve their garbage problems unassisted over the next couple of years. Laidlaw’s Guilford said that with a co-operative effort among the province, the municipalities and the private sector, alternative methods of disposal can be developed and operating within four years. But Guilford said that the Ontario government will have to provide firm guidelines and rules for private-sector operators because of the major investments required. And the province must act by the end of this year, said Guilford. The result could be a bonanza based on garbage for private wastemanagement companies—and the end of a nightmarish problem for the municipalities.

D’ARCY JENISH with ROBERT REGULY and JULIE CAZZIN in Toronto 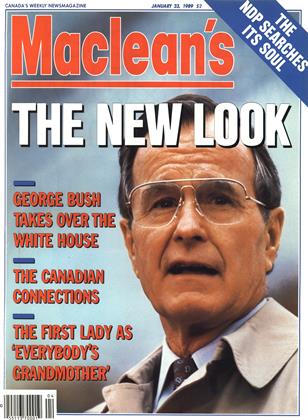