At 51, Jane Fonda says that she is starting to slow down—at least by her standards. The actress’s latest 65-minute exercise video, Jane Fonda ’s Complete Workout, is less strenuous than the gruelling aerobics she practised in her first best-selling work-out tape. “I’m not as macho as before,” said Fonda, who, in between leg lifts, is

producing and starring in the drama Old Gringo with Gregory Peck, scheduled for a fall release. Also due this year is Letters, a love story costarring Robert DeNiro, which fell behind schedule in Toronto after Fonda broke her nose while bicycling to keep in shape. Although she plans another aerobics video, Fonda said that she is trying to be less obsessive about fitness. She added, “I’m striving hard to control compulsive tendencies.”

Learning how to play nice

It may be the hardest role he has ever had to master, but actor Mandy Patinkin says that he is determined to learn how to be a selfless person. Patinkin, 36, said that years of being a perfectionist have made him “superficial,” and

his career must now take second place to his regular selfimprovement sessions with his therapist. Still, the New York City-based Patinkin has agreed to costar with Meryl Streep in the movie version of Evita, which begins filming this summer. He will re-create the Che Guevara role that

The bad boys of popular music, The Rolling Stones, only got a little satisfaction last week when they were inducted into the Rock and Roll Hall of Fame. The honor is merely a formality, for now. The permanent $58-million museum of rock greats, to be erected in Cleveland, is still in the planning stages. Said Mick Jagger, the 45-year-old lead singer of the group, which last recorded an album in 1986: “I hope they will get down to building this phantom temple.”

Employees who are regularly besieged with colds and the flu may have their bosses to blame, writes Dr. Peter Hanson in his latest book, Stress for Success, to be released next month. In the sequel to his 1985 best-seller, The Joy of Stress, the Vancouver-born Hanson says that the strain of working for a "terminal jackass" can weaken an employee's immune system. As one antidote, he prescribes seeking out support from co-workers. But Hanson, 42, warns, "It's hard to soar like an eagle if you're working for a turkey."

For actress Cynthia Dale, being mean and tough is just part of a day’s work. Dale, 28, who stars as a manipulative lawyer in the CBC TV series Street Legal, will play the malicious Olivia who assaults her boyfriend’s seductress in the black comedy Babycakes, to be aired on Feb. 14 on the CBS network. Until recently, the Toronto native used to play young innocents and was reluctant to portray characters that the audience might dislike. Now, she says that she can cope with disapproval. Still, adds Dale of Olivia: “She is so mean, even I wouldn’t want to meet her in a dark alley.”

won him a Tony in 1980, when the musical played on Broadway. But Patinkin, who next month is releasing a debut solo album of show tunes, maintains that working on becoming less selfish remains his most important project. He added, “When I’m 80 and talking to people on a park bench, I want to be truly interested in what they say.” 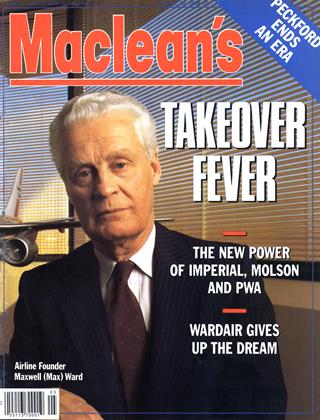