A good cook can do wonders with leftovers, and Stevie Cameron’s food has won her fame wherever she has set her table, mainly in her warmly remembered stint as an Ottawa newspaper journalist from 1977 to 1986. In the pages of her new book, Ottawa Inside Out, the Toronto Globe and Mail columnist prepares as tasty a bill of political fare as has come out of the capital since Richard Gwyn roasted and toasted Pierre Trudeau and served him up in a Magus pie. Cameron makes everything stale taste fresh. Her research is sharp, if often secondhand. Her nose for gossip is keen, although her pen is not as glib as that of an older ex-Ottawa snoop, Allan Fotheringham.

In Cameron’s book, the “ins” are the mandarins, lobbyists, media and the smattering of oldmoney Ottawans who add a touch of quiet class. The “outs”—the ones Canadians send to Parliament, ostensibly to run the country—do not fare so well. They do provide the stuff that makes the place go and puts the Ottawa dateline on 80 per cent of the country’s news. But they are treated here, as so often in the media, as guilty, never to be proven innocent. Their crime was getting elected, and they are judged

to be crooks, buffoons and bumpkins, with scarcely an admirable policy, motive or ambition in their pointy heads.

In Ottawa Inside Out, the “inside” is better than the “out,” for Stevie Cameron is, above all, an insider. And when she is not, she does a good job of sounding like one. She knows the language of the gentry—the savagery of the scribe had to be acquired later. Not only does she know, and use, the names of all the implements and attitudes of the genteel life, but she is also hip to all the buzz words of bureaucracy too, through the eyes of her civilservant husband, David Cameron.

The son of a dean at the University of British Columbia, he is the mandarin’s mandarin, a former assistant deputy minister for various departments in Ottawa. Now senior constitutional adviser to Ontario Premier David Peterson, he is also that province’s chief liaison officer with Quebec. In pursuit of both their careers, the Camerons have always entertained lavishly—continuing in their Toronto home the tradition they established in the minimansions they owned in Ottawa.

And nowhere is this book more eagerly awaited than in the elegant salons of Rockcliffe or the heavily yuppified section of Ottawa called New Edinburgh. The natives there have always seen Cameron as one of their own. Her accounts of the new Ottawa reflect their long-

entrenched Liberal viewpoints. Her scenario depicts Ottawa as it was before the Tory barbarians arrived, led by those parvenu Mulroneys at the lace-curtain stage of bog Irish development—with an assist from his crinklesnooted Yugoslavian wife from Sarajevo.

Cameron clearly laments the passing of the old capital.

“Ottawa used to be more fun—now it is dreary and extremely careful,” she writes.

She means the Allan Gotliebs and the Bernard Ostrys and the Richard Gywns are not on hand to give parties anymore, nor is she herself. Parties may be given now, but obviously not by anybody who might matter. “Why does the city feel sour today?” she asks. The question begs the answer: it must be because the Stevie Camerons have moved to Toronto. And who could sell a book like this about that place?

The book serves up four courses, not necessarily as Cameron labels them in her menu. The soup is her travel-magazine tour of Ottawa, spiced with asides about who is doing what to whom, and where, including a curious swipe about the Tulip Valley Motel being the place for media assignations. The fish course is a doctoral

thesis on how the game of politics is played, layer by layer. It is the best part of the book, with its insights into how governments govern—how they are supposed to, how it happens, and how it could be a better, presumably Grit, world.

The main course is a dazzling recital of who matters and why, including those who have faltered. Good night, Mike Duffy. Hello, Wendy Mesley. So long, Dalton Camp. Solid work, Carol Goar. Cameron’s own feminist viewpoint is evident as she routinely points out the paucity of women in high places in government—and frequently trumpets the superiority of women who do make it, particularly in journalism.

For dessert, there is a rehash of all the hatchet jobs that have been done on Brian and Mila Mulroney, full of details about the shopping and decorating habits of the rich and famous, much of it funded by taxpayers’ money. Cameron at least spares readers a repetition of her most famous exposé: the size of the Mulroney cupboards, and the number of gowns and Guccis therein. The old scandals echo like the bonging of a distant gong. Five official residences—Sussex Drive, the Harrington Lake

summer cottage, Stornoway, the Kingsmere residence of the Speaker of the House, and Government House, the home of the Governor General—are trashed, along with their occupants.

And the committee members who supervise them are reduced to lackeys of a luxury-crazed Prime Minister. Giovanni Mowinkel, the man who did the decor, ran up the debts and fled to Italy when the Prime Minister did not pay the bill (it was later settled), gets several pages, mostly admiring. Cameron also plugs the work of other designer pals of hers, as well as a long list of merchants, bistros and other hangouts that she touts.

Despite all the old material, there are some new insights, some of which read like an auditor’s report, reflecting Cameron’s intense use of the access-to-information channels. There are how-to courses in spying, reporting—and wenching and whoring for both sexes (Cameron notes that the city’s Yellow Pages include roughly 120 escort services).

The scribblers and garglers of the Parliamentary Press Gallery should be forced to read Ottawa Inside Out as a qualification for entry into the Parliamentary Precinct, with all its perks—or even to the plebeian National Press Club, with what Cameron calls its “terrible” food. For her part, Cameron is currently providing some of the tastiest tidbits in town. The good parts are very good, and the stale parts are lukewarm—just like leftovers. 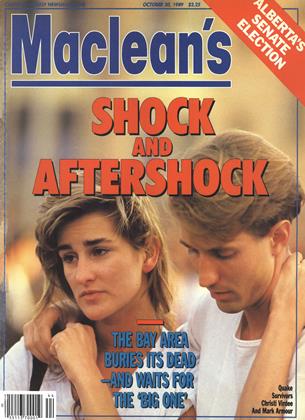