Briton Andrew Lloyd Webber’s formula for the hit musical. Expectations among media commentators were high that Gala, Quebec’s first homegrown Broadway-style musical comedy, would be the breakthrough needed to make the form as popular among French-speaking theatregoers as it has become with English audiences. Singer-songwriter Jean-Pierre Ferland and Emmy award-winning composer Paul Baillargeon had predicted that their $1-million show—one of the most expensive of its kind in Quebec—would first conquer Canada, then Paris and eventually London and New York City. And when Gala premiered at Montreal’s Place des Arts

recently it was the talk of the town—but not for the reasons its creators had hoped. The musical, which critics had written about enthusiastically before it opened, was greeted by an unprecedented critical backlash. Ferland and Baillargeon, almost all local newspaper reviewers declared, had not produced the major work that they had boldly promised.

Gala was a major gamble from the start. The Broadway-style musical is foreign to many Quebecers, who traditionally prefer operettas and musical revues. Based on the life and loves

of the Russian-born beauty known as Gala, the show is set in Paris during the 1930s, when the surrealist artistic movement was at its height. Born Helena Deluvina Diakonoff, Gala became an inspiration to many of the movement’s artists, marrying two of its most prominent members: French poet Paul

Eluard and, later, Spanish painter Salvador Dali. Through Eluard, she was introduced to other leading figures in surrealism and had affairs with several of them. Then, after Eluard took her to Spain to meet his good friend, Dali, in 1929, Gala chose the painter over the poet. She and Dali stayed together until her death in

It was the reputation of Gala as an impulsive and enigmatic muse that inspired Ferland and Baillargeon to write their first musical. “I was always amazed that this woman made so much trouble for the two best surrealists in the world,” says Ferland, who invested $100,000 of his own money in the project. Sponsors included Hydro-Québec and Alcan Aluminum Ltd., as well as Place des Arts, coproducer of the show’s two-week run—which ended on May 7—as part of its 25th anniversary celebrations. The musical drew mixed reactions from its near-capacity crowds in Montreal. It moves on to Quebec City later this month and then to Ottawa in June.

Both Ferland and Baillargeon staked their reputations on Gala. For 30 years, Ferland— who wrote the book and lyrics—has been a household name in French Canada. As one of Quebec’s leading singer-songwriters, his name ranks closely behind Félix Leclerc and Gilles Vigneault. He is also known as the host of a television talk show, L Autobus du showbusiness, on CBC’s French network, Radio-Canada. Baillargeon, who wrote the music for Gala, has composed for some of the biggest names in the Quebec music industry. He also spent several years in New York writing film and television scores, for which he collected various awards before returning to Montreal in 1981. Said Ferland before the show opened: “Paul [Baillargeon] had just come back from New York, and I had been living in France—so we exchanged. He showed me how to write for musical comedy, and I showed him what surrealism was.”

For two years, the collaborators made a monthly pilgrimage to Broadway to study the works of Webber, the master of the modern musical. Baillargeon saw the British composer’s Evita 21 times, while Ferland was inspired by The Phantom of the Opera. The two sat down to write Gala believing that they had found the secret of Webber’s success. Said Ferland: “When we decided to write this, we said we were going to go to Broadway with it. And we are going to go to Broadway—even if I have to pay for it.”

But somewhere in the course of creation, they lost sight of the story that had inspired them and upstaged it with surrealist scenery and props. Miniature replicas of the Eiffel Tower, the Arc de Triomphe, Notre Dame Cathedral and other Paris landmarks float across the stage floor and are swept into a gutter by a black-faced midget wielding a silver broom. A giant eye, its pupil bursting with light, descends from the heavens. A huge silver teardrop with a woman perched inside hovers below it. Layers of projected images and lights melt into haunting psychic dreamscapes. It looks good, but Ferland and Baillargeon have failed to provide enough substance to bolster the surface gloss.

The production lacks focus, with no plot thread to keep it together. There is rarely a connection from one song to the next. The Eluard-Gala-Dali love triangle almost seems incidental to the special effects, the lavish

costumes and Ferland’s attempt to explain surrealism in the lyrics of his songs. And at times, the songs and the story conflict. At one point, a dejected Eluard Qean Maheux) offers a tender, lovelorn song, but he does so before the relationship between Gala (Sylvie Tremblay) and Dali (Marc Labrèche) is revealed.

By the time the curtain descends on a withered and dying Dali, the audience is left wondering what Gala was all about. And although many columnists applauded the musical in anticipation the week before the première, it was suddenly fashionable afterward to tear it apart. Robert Lévesque, theatre critic for the Montreal newspaper Le Devoir, led the charge,

calling Gala “insipid and without inspiration.” Pat Donnelly, the Montreal Gazette’s theatre reviewer, called it “middle-of-the-road schlock.” Critics lashed out so violently, wrote Le Devoir arts critic Nathalie Petrowski, because Ferland had “talked too much, promised too much.” Indeed, reaction to the show has been so severe that Ferland and Baillargeon are not returning calls. Gala is expected to open this fall in Paris, where the story takes place. That may prove to be the ultimate test of a spectacle that brings a dash of Broadway glitz to the dreamlike world of surrealism. 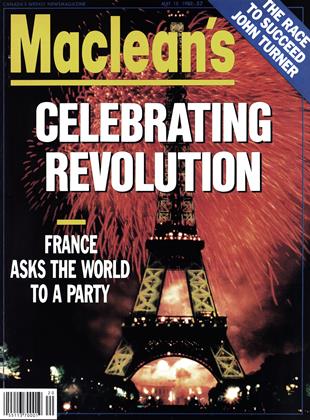