The defiance in Anthony Laughing’s voice was good-humored, but chillingly clear. The 47-year-old former iron-worker owns Tony’s Vegas International casino, a 24-hour-a-day gambling haven tucked inside the legal no man’s land of a Mohawk Indian reserve that straddles the Canada-United States border near Cornwall, Ont., 110 km southwest of Montreal. There is a bullet hole in the wall over the desk in his office. Ten AK-47 assault rifles lean against a wall. Last July, casino employees levelled the weapons at about 100 FBI agents and New York state troopers, forcing them to abandon an attempt to seize the casino’s slot machines. Now, Laughing says, fellow Indians of the Akwesasne-St-Régis Mohawk band who are opposed to the growing influence of gambling on the reserve will meet the same response. Declared Laughing: “They can picket every day. But if they attack my property, we will defend it.”

A similarly defiant mood is evident at several other casinos and high-stakes bingo halls on the reserve. And among the reserve’s 8,500 residents, the potent combination of guns, money,

and Indian pride has produced a growing sense of alarm. Since 1984, when the first bingo hall opened, gambling has created 600 jobs on the reserve. But it has also brought intimations of Mafia influence, an armed force of self-styled Mohawk Warriors who operate beyond the

Gun-carrying'Warriors ’ protect their bosses from white police and fellow Mohawks

control of elected band councils, and mounting violence. “Last month,” said Douglas George, 34, the antigambling editor of the Akwesasne Notes weekly newspaper, “we were very close to all-out war. Unless there is some radical shift, it can only get worse.”

on July 20, a force of 30 Warriors blocked roads entering the reserve, leading to a 10-day standoff with police. Since then, some Akwesasne residents appear to have taken the law into their own hands. Several cars have been burned, men beaten, and a casino transformer has been shot out. And last month, a mob of residents opposed to gambling threatened to burn Laughing’s hall but were deterred by armed guards. Instead, the mob set fire to the Lucky Knight, a smaller casino under construction nearby. Meanwhile, efforts to negotiate a settlement between gambling opponents and the casino owners broke down early this month.

At the 6,500-member Kahnawake Reserve south of Montreal, several Mohawk investors defied a December, 1988, band referendum that rejected plans to open a $2.7-million highstakes bingo hall and proceeded with construction. The Super Bingo Hall is expected to open by Sept. 24, under the protection of local Warriors. Last week, Chief Joseph Norton, head of the elected band council, warned that reserve constables would barricade highways leading to the bingo hall. But he discounted the risk of violence. Said Norton: “Bingo is not worth killing anybody for.”

But at the Akwesasne-St-Régis reserve, the huge profits available to bingo hall and casino owners have fuelled an atmosphere of freewheeling defiance. At the four-year-old Mohawk Bingo Palace, part-owner and proprietor Guilford White, 49, acknowledged taking in $9 million a year from Canadian and American

patrons playing for top prizes of as much as $90,000—nearly 400 times the prizes offered by regulated bingos in Syracuse, N.Y., 250 km southwest of the reserve. Dressed in a limegreen open-necked shirt under an offwhite blazer and sporting a heavy gold bracelet, the former Washington D.C.-based union agent dismissed the opposition of Mohawk traditionalists as “phoney Indian beads-and-braids bullshit.” Between puffs on a cigar, he compared Michael Mitchell, the antigambling chief of the reserve’s Canadian half, to Fidel Castro, Ho Chi Minh and Moammar Gadhafi.

At Tony’s, the annual take is impossible to tally: Laughing destroys the casino’s daily transaction records in a paper shredder. But Laughing said that he has already recouped his $700,000 investment—admittedly earned from smuggling American cigarettes into Canada—three times over. For one thing, the casino’s location on the reserve means that it is exempt from state income tax.

According to their critics, the hugely profitable gambling halls may also have attracted the attention of organized crime. Indeed, White acknowledged last week that one of four Americans who together invested $2.4 million in his bingo hall, had “unsavory connections.” White said that after he learned recently of the man’s

underworld associations he paid him more than $2.4 million to withdraw from the partnership. But newspaper editor George said that he warned White publicly in 1984 that the Las Vegas investor had three times been refused a gambling licence in Nevada.

But it is the Warriors whose armed presence has most alarmed opponents of the casinos.

The roughly 50 young men openly acknowledge that they are involved in the cigarettesmuggling business. But they deny that they are on the payroll of the casino owners. Warrior spokesman Loran Thompson, for one, insisted that the group defends the casinos because of principle, not profit. Said Thompson: “We are defending the sovereignty of our people.” But on the Canadian side of the reserve, resident Barbara Barnes offered a different view. Said Barnes: “The Warriors are smugglers. They are not protecting our sovereignty, and they are not the kind of people who should be patrolling us.”

But the reserve’s unique geography is also part of the problem. The 28,000-acre reserve straddles the St. Lawrence River at the juncture of New York state, Quebec and Ontario. The governments and various police forces of all three, as well as the Canadian and American governments, exercise some jurisdiction. As well, three Mohawk factions vie for influence on the reserve itself: separate elected councils on the U.S. and Canadian sides of the reserve, as well as a group of hereditary chiefs. According to White, the dispute over gambling “is not about craps or blackjack or bingo; it is about control of the reservation.” As residents faced each other under the watchful gaze of the armed Mohawk Warriors, it was a claim of unsettling accuracy. 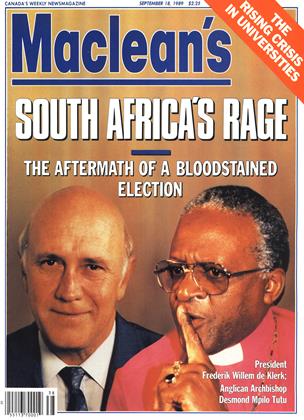