Promoting the Goods and Services Tax through the spring and summer was a painful lesson in failed public relations for the government of Prime Minister Brian Mulroney. Repeated efforts by Finance Minister Michael Wilson to present the sales tax as an equitable way to strengthen the economy and reduce the federal budget deficit seemed ineffective. Even cross-country hearings by the Commons finance committee, chaired by government backbencher Donald Blenkarn, did not appear to raise the levels of public support. With the government under pressure to compromise, Wilson finally announced on Dec. 19 that the rate would be reduced to seven per cent from the originally proposed nine per cent. And to convince Canadians that the government is also committed to

cutting its own spending, a series of austerity measures were made public only days before the Wilson announcement. Still, gaining the support of taxpayers for the GST may continue to be difficult. This year’s Maclean’s/Decima poll, taken in November, indicated widespread skepticism. More than two out of three poll respondents said that even if the new tax increased government revenues, that money would be wasted and mismanaged.

As indicated by the December government announcements pledging austerity and promising a lower rate of sales tax, winning public support for the tax is one of the government’s top priorities. Said Decima chairman Allan Gregg: “The GST will be an ongoing political liability unless the government is able to convince the population that it has adopted parallel

programs to deal with its own waste and i inefficiency.” To deal with accusations that the « government’s own spending was wasteful and C mismanaged while it was planning to levy a new \ tax, the government unveiled a program of c promised spending cuts and fee increases on Dec. 15. Spread over three fiscal years beginning on April 1, those measures add up to $1.4 billion, less than one per cent of the projected 1990-1991 annual budget. Wilson, who had said that “difficult trade-offs” would have to be made to accommodate a change in the GST rate, reduced by half the planned tax credits for lower-income Canadians. But the measures have not silenced all the critics. Opposition leaders said that even the reduction in the GST rate to seven per cent would do little to soften the impact of the tax. Said New Democratic

“Seven per cent doesn’t change the fact that those who are hurt the most are those who have the least. People are not saying they don’t want to pay tax, but they want it to be fair.”

The campaign to promote the tax hit several obstacles. After it was first announced on April 26, government officials said that the GST would be a revenue-neutral tax. No more money would accrue to the government under the GST, Wilson said, than the government now receives from the manufacturers sales tax, which the GST is intended to replace. The manufacturers tax, levied at a rate of 13.5 per cent, applies to about one-third of all goods produced in Canada and is hidden in the retail price of goods.

76 per cent said that they believe the GST will bring in more money for the federal government. Almost half of all respondents—47 per cent—said that those revenues will be substantially higher than under the existing tax.

According to Gregg, the idea of revenue neutrality was simply not believed by the majority of Canadians.

The government has also apparently had difficulty convincing Canadians that additional GST revenues will be used to reduce the federal budget deficit, now more than $30 billion. But, in the poll, 70 per cent of respon-

GST revenues would be used to pay for social programs. Said Gregg: “The problem is that the tax is seen as not just unfair, but also ineffective because it will be wasted.”

The prospect of shouldering a new layer of taxes arises at a critical time for many Canadians. The GST, if imposed as planned on Jan. 1,1991, will levy a seven-per-cent tax on a wide range of goods and services, from haircuts to legal services, that were previously untaxed. But taxes from all sources already consume about half of the average Canadian’s income, more than food, shelter and clothing combined. At the same time, wages have barely kept up with inflation, and consumers are increasingly reducing their spending. Poll results indicate that many Canadians now are demanding that the government cut its own spending rather than asking for more taxes from Canadians.

Poll respondent Susan Smyth, 45, of Tamworth, Ont., a small farming community north of Kingston, occasionally works with senior citizens and the homeless. Said Smyth: “People are really pulling in their spending more than they were a few years ago. And yet the government is spending money on things I don’t agree with, like aid to the Third World, when there are a lot of hungry and homeless here. I believe that we should take care of our own first.” For his part, Walter Noddin, a logger in the settlement of Queen Charlotte, B.C., said that more money should be directed towards cleaning up pollution and less

to such areas as the military.

The projected reductions in government spending, announced by Treasury Board president Robert de Cotret, include both highprofile cuts in the expenses of MPs and reductions totalling $450 million for some government departments. The announced cuts over three years include: $3 million out of such parliamentary expenses as travel by MPs and parliamentary dining rooms; $8 million removed from the budget of the National Capital Commission for improvements to official residences in Ottawa; the use of private contractors for such government activities as translation and the collection of student loans; and a $7 0-million reduction in the budget of the department of external affairs, which will include a review of foreign-aid programs. And Wilson announced some tax increases and a reduction in tax breaks intended to soften the impact of the GST, including tax credits for lower-income Canadians.

Despite the new measures, the government may still have trouble convincing Canadians that its tax changes are economically responsible. Said poll respondent Smyth: “Basically, I do not have a whole lot of faith in government’s management of the economy.” That attitude may remain the greatest hurdle in the way of Ottawa’s campaign to convince Canadians that the GST is fair and necessary.

THE LIMITS TO HONESTY

But a follow-up question showed that there are limits to honesty, if it means entrusting the police with the cash. Poll respondents who said that they would return the find to its owner then were asked what they would do if the wallet lacked any

Quebecers also showed that they have a mind of their own in another hypothetical question related to material success. Poll respondents were asked to choose among five possible careers in which “you could be one of the most successful people in the world.” The leader: success in business, the choice of 38 per cent across Canada. That was followed by sports (21 per cent) or writing (21), politics (10) and acting (8). But in Quebec, only 28 per cent chose business. Success in politics was a stronger draw in Quebec than elsewhere: 14 per cent in that province picked politics, compared with nine per cent in all other regions. □ 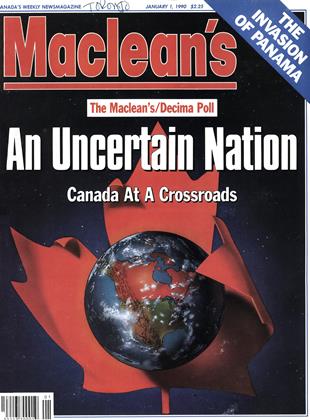