The critical act took only a few minutes. But until last week, it had cast a shadow over one of the New Democratic Party’s brightest lights. On Nov. 29, at 11:40 a.m., NDP MP Lorne Nystrom entered a Shoppers Drug Mart in downtown Ottawa, went to the eyecare section, opened a $7.79 package of contact-lens cleaning discs, put the contents in his pocket, replaced the empty package on the shelf and then left the store without paying for the discs. Moments later, security guard Mindy Gosman stopped the 43-year-old MP outside the store and called police. Nystrom was charged with shoplifting.

Last week, however, Nystrom told a crowded Ottawa courtroom that he had pocketed the discs in a state of distraction and fatigue and was unaware that he had carried them out of the store. “I have no idea why I put them in my pocket,” the boyish-looking MP testified. “I wish I could tell you why.” For her part, Gosman, who is an eight-year veteran as a store security guard and who kept Nystrom under surveillance throughout the episode, insisted in court that he had acted intentionally. She declared, “If it was an honest mistake, I would have known it.” But provincial court Judge Brian Lennox accepted Nystrom’s explanation and acquitted him.

It was perhaps the most sensational shoplifting case in Canada since January, 1982, when then-Parti Québécois house leader Claude Charron left an Eaton store in Montreal with a sports jacket that he had not paid for. Charron was convicted of theft under $200 and was

fined $300. The incident destroyed his political career. But last week, flamboyant Torontobased lawyer Clayton Ruby argued successfully in Nystrom’s defence that the Saskatchewan MP has a history of forgetfulness—including misplacing his keys and, on one occasion, backing his car over his briefcase, which he thought was in the trunk. As well, Ruby contended that the stress of the impending NDP leadership convention, which Nystrom was scheduled to co-chair beginning the day after his visit to the Ottawa drugstore, compounded his distraction.

Ruby also called Liberal MP Jim Peterson, Conservative MP David Kilgour and former NDP MP Ian Deans to the stand as character witnesses for Nystrom. To complete his case, the lawyer presented an expert in package design who testified that the box containing the contact-lens cleaners was so confusing that a consumer might have to remove the discs in order to make sure that they were the right product.

For Nystrom, the acquittal ended what he called “an experience I wouldn’t wish on anyone.” As it was, details of his personal habits— including the color of his toothbrush (red) and the brand of shampoo he uses (Nexus)—were entered into the public record. And for his part, Charron, who now hosts a weekly public affairs show on the Quebec television network TVA, noted a critical difference in the two cases. Said Charron: “He was innocent, and I was guilty.” 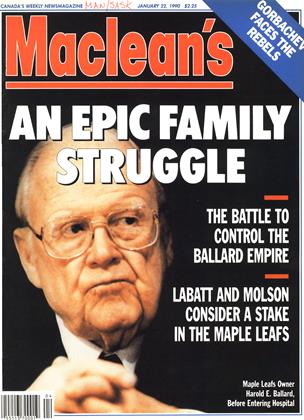