Last fall, federal Liberal organizers decided to stage the first all-candidates' forum in the party's leadership race at the Metro Toronto Convention Centre on Jan. 28. But the officials overlooked the fact that the meeting was scheduled to end at 4:30 p.m., only one half-hour before the televised kickoff of the 24th Super Bowl contest, the National Football League's championship game. As a result, some prominent Liberal football fans—including Senator Keith Davey and one Ontario cabinet minister—say that they might miss the Sunday meeting. Instead, they are considering staying home and watching live coverage of the political meeting on CBC TV'S Newsworld channel before switching to the Denver Broncos and the San Francisco 49ers. Still, the party's communications director brushed off all charges of poor scheduling. Said André Tessier: "San Francisco is favored by 10 points, and the game is a foregone conclusion. This race will be more interesting." Stay tuned.

A newcomer to a familiar land

Mary Walsh resigned from The Wall Street Journal last October, leaving an assignment that she calls “one of the most glamorous jobs in American journalism”: being the newspaper’s principal correspondent for South and Southeast Asia. But Walsh said that she had quit because the Journal had delayed publication of her contention that CBS TV network news had purchased—and broadcast—faked film footage of the Afghan war. As a result, added Walsh, the New York Post also uncovered that story—and printed it first. Walsh, who is now reporting on Canada for the Los Angeles Times from a base in Toronto, predicts that her new posting is likely to be less hectic than the Asian beat. Said Walsh: “It is so much easier to be in a place that has one language.” The battle over the Meech Lake agreement alone should alter that view.

The CIA is paying James Sandbom $143,000 to create an abstract work of art for its new headquarters building in Langley, Va. But in the best cloak-and-dagger tradition, CIA officials refuse to allow public access to the courtyard that holds the iron-and-granite sculpture. The work also carries a plaque inscribed with a lengthy quotation from a spy novel—in code. And, according to Sandbom, only he, CIA director William Webster and George Bush know the identity of that passage. Call it art that is out in the cold.

In search of the right message

South Africa has revoked a two-year-old order barring Jesse Jackson, and the U.S. politician now plans to be in Cape Town in early February. At that time, South African President F. W. de Klerk is widely expected to free Nelson Mandela, the famed black activist who has spent the past 26 years in prison. And, according to officials in Washington, Jackson may serve as a bridge between Mandela and George Bush—who seeks to quicken reform in South Africa by talking to de Klerk in Washington. The payoff for Jackson: he would draw massive media coverage by delivering any Mandela endorsement of that invitation.

ONLY ONE QUEST TO A FAMILY

Lloyd Axworthy announced last week that he would not enter the race for the leadership of the federal Liberal party— largely because he could not raise the money needed for such a bid. But as the veteran MP from Manitoba withdrew from that quest, his wife embarked on a new position with a royal commission on the future of passenger transportation. Denise Ommanney’s primary job will be to arrange hearings across Canada for a study directed by former Alberta treasurer Louis Hyndman. She performed a similar task between 1983 and 1985 for an influential royal commission, which urged that Canada should forge a free trade agreement with the United States. While some Tory party members privately expressed their annoyance that the wife of a prominent government critic had landed the job, Ommanney said that no one had passed on any complaints to her. In any event, Ommanney has ready access to a useful source of information on federal transportation policies in recent times: Axworthy held that portfolio six years ago.

STANDING ON GUARD AGAINST A VIRUS

In Ottawa, the RCMP is now battling to halt the spread of so-called computer viruses within federal data banks. Indeed, an RCMP memo obtained by Maclean's warns civil servants that their electronic files are under attack by clandestine, information-deleting commands bearing such exotic names as Disc Killer and Ogre. Declared the Dec. 12 memo: "The virus problem has infested Canadian government users in a major way, with seven departments being hit in the past week." But while the RCMP held a Jan. 18 seminar to teach civil servants how to protect computer software, Insp. Ian Ross refused to name government offices that have already been infected. Said Ross: "If I start pointing fingers at individual departments, they are going to be hesitant in reporting occurrences to me."

The spoils of victory

Teams of quick-witted high-school students did battle each week on Reach for the Top until CBC TV ended a 20-year run and cancelled the quiz show in 1985. But Sandy Stewart, the show’s former producer, has rekindled interest by persuading schools across Canada to enter regional—untelevised— Reach for the Top contests. And last June, Stewart’s production company even broadcast Reach for the Top’s national championships to 11 TV stations. Despite a hard-won victory, however, a team from Tagwi Secondary School, near Cornwall, Ont., is still trying to gain the Reach for the Top trophy. That is because officials at Kate Andrews High School in Coaldale, Alta., are reluctant to surrender a prize that their school team appeared to have won for posterity in 1985. A winner-take-all match between champions could be the answer. Lights, camera, action?

U.S, Supreme Court Judge Thurgood Marshall is 81 years old and in fragile health. And if the court's most prominent liberal retires, many officials in Washington say that U.S. Trade Negotiator Carla Hills, a 56-year-old lawyer and graduate of Yale University, is most likely to succeed him. They add that Hills, a moderate conservative who watches over the Canada-U.S. Free Trade Agreement, has powerful qualifications: she is a personal friend of George Bush's. 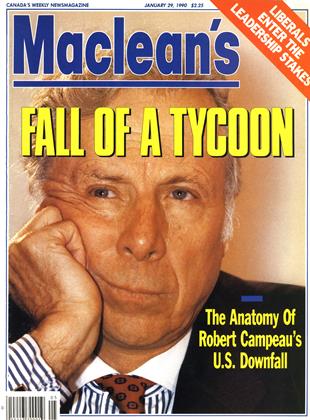