If Conrad Black were not such a wealthy man, he would have a high reputation as a journalist. In recent years he has been exercising his writing muscles with some regularity, and it shows in the increasing economy of his prose. He may not have yet reached the spare style of an Orwell or G. K. Chesterton—who among us has?—but he is head and shoulders above 99.9 per cent of the journalists in Canada.

The Canadian media has shown at best an indifference to Black’s columns (which appeared in The Globe and Mail's Report on Business Magazine until Black purchased an interest in the competing Financial Post), or more often outright contempt. This attitude has always seemed to me symbolic of one of the basic problems Canada faces. In some curious way, part of our intellectual development was arrested in the 1960s. In spite of all the changes in the world, including the utter discrediting of socialism, Canada remains a backwater where wealth and success are regarded with suspicion. This is the land, which, postGorbachev and in spite of Mitterrand, the redesigned French socialist president, has elected unreconstructed socialists in Ontario and may well do so federally.

At the base of all this, I think, is a muddle in people’s minds about the fundamental relationship between morality, capitalism and democracy. During the 20 years I worked variously at CBC and CTV and in Canadian magazines, I quickly came to realize that the belief that capitalism is intrinsically an immoral system is a tenet of faith in Canadian journalism. Capitalism’s advocates are perceived as greedy and callous. The consequence of this is that the humane face of society can only be represented by those opposing capitalism. In electing a socialist government, Canadians believe, for better or worse, that they will at least elect people who care.

Doubtless, the early capitalists had unsavory types among them. But to damn capitalism today for its uncaring role misses one point.

Essentially, capitalism is a means of creating wealth. So far, it is the most successful means human society has devised. But it is only a means. In the Western world, the end of capitalism has produced a society, as American theologian Michael Novak points out, where caring for others is the central theme of daily life. Socialists may feel “solidarity” with the poor and the dispossessed. Very nice. But what does that do for the poor? I suppose it is a special privilege of religion not to be concerned with the effect of a policy, only the purity of its intentions.

Capitalism, on the other hand, creates the wealth for social programs, housing, education and better standards of living. But this is often overlooked in assessing its moral role. In a recent poll taken in Britain, people were asked: “Which society comes closest to your ideal—a society in which the creation of wealth is more highly regarded, or a society in which caring for others is more highly regarded?” The majority of those questioned chose the second answer, the caring society. The pollsters interpreted this to mean that the majority of those questioned held socialist values. Not so. This mischievous confusion between means and ends is a common error. In fact, supporters of demo-

cratic capitalism also hold the caring society as their primary value just as do Jews, Christians and even those humanists whom Albert Camus called “the secular saints.”

A familiar figure to all of us is the wealthy North American capitalist, his million dollars made, asking himself, “What is the point of all this, what is money for?” North America has a whole industry of seminars devoted to the philanthropic needs of the aging capitalist, unsatisfied by his house, swimming pool and materialism. Wealth creation, to quote Novak again, “is an indispensable and high-priority means to a good society—economically, politically, socially and morally—because economically the alternatives—stagnation and decline—breed much suffering among the poor. Politically, the poor will not love democracy unless they see concrete economic progress in the lives of their own families; socially, its absence freezes class rigidities and diminishes economic mobility; morally, because stagnation and decline destroy personal hopes and awaken envy and covetousness.” When people do not live in an open society, they enviously compare themselves with the Joneses rather than focus on where they themselves hope to be in 10 years’ time.

Democratic capitalism can flourish, of course, only in an atmosphere of liberty. Liberty is the essential component because the real capital of capitalism is human enterprise. Enterprise involves seizing responsibility for oneself and taking the initiative. In that sense, enterprise is a moral and intellectual virtue on the same footing as prudence. The intellectual component of enterprise is called “discovery,” and the practical aspê£t of it is the capacity to execute. As the philosopher John Locke pointed out, the discovery of quinine did more for the lot of poor people than all the virtuous hopes in the world. The contemporary neoconservative philosopher Irving Kristol has summed matters up by saying that bad ideas have caused more suffering among the poor than the weather, famine or disease.

All one is trying to say is that Canada, virtually alone in the world, seems to be suffering from a very nasty attack of bad ideas. Canadian voters seem not to understand that public policy, which represses the human right to enterprise, is an offence against human dignity and leads to economic, political and moral decline. Policies such as pay equity, nofault insurance and mandatory affirmative action quotas do not, ultimately, help the poor or underprivileged, though they may give a shortterm glow. They stifle the economic well-being and wealth of a society and drain its moral and physical capital.

It may be that Canada must experience the complete stifling of enterprise before its value is truly understood. The election of the NDP in Ontario is a crucial first step. Meanwhile, it is a shame, I think, that negative attitudes towards wealth and enterprise remain entrenched in Canada. Canadians may not miss Conrad Black, who now lives in England, because they never realized what he stood for and what they were losing when a man of his calibre gives up the battle. They will. 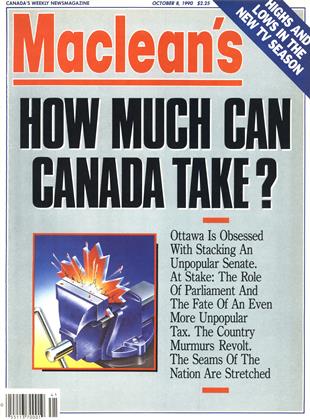