Free trade’s enemies are overpaid labor unionists or fat-cat monopolists. But freer trade is a trend as immutable as gravity

The lingering debate over free trade is irrelevant, as is the battle against the Goods and Services Tax. Opponents of both are practitioners of ostrich economics, the tendency of persons with a low economic IQ to simply stick their heads in the sand. The GST and free trade initiatives, whether bilateral, trilateral or multilateral, are essential policies in sync with the irreversible, postwar trend towards a global economy.

The world has become McLuhanesque, a global village where economic benefit is awarded increasingly to those who can best perform and not merely to those who can keep others out of the village. That is why free trade’s enemies are predictably overpaid labor unionists or fat-cat monopolists. While protectionism gets headlines and votes, Canadians must realize that ranting against free trade is a nonstarter. Free trade is a profound historical trend which is as immutable as gravity. The debate of the 1990s is not whether free trade is a good idea or not: the debate should centre on how to adjust, how to improve strengths, cushion dislocations and find new niches.

The global economy is a result of the liberalization of trade worldwide. The process began in Bretton Woods, N.H., in 1944 when 44 nations sat down to make economic trade-offs. It continues through painstaking negotiations and amendments to the General Agreement on Tariffs and Trade (GATT), the “constitution” that defines the new world economic order. Prior to the Second World War, high tariff walls protected home markets from foreign interlopers, thus denying consumers the best products at the lowest prices. Similarly, before the Canada-U.S. free trade deal, Canadian copper flowed south at a tariff of one per cent but Canadian insulated copper wire was hit with a 5.3-per-cent tariff.

The global economy is a welcome historical development. It represents the biggest redistribution of wealth in human history, as buyers in wealthy countries agree, somewhat reluctantly at times, to open up their markets to

sellers from low-cost, poverty-stricken countries. It also has contributed to the collapse of communism in the Soviet Union and Eastern Europe as its leaders found that they could not live outside, or without, the increasingly free and efficient market system. That is why the Soviets and others are attempting economic reform and seem intent on joining the GATT process. Of course, that process is not without its problems. At present, the Americans and the Europeans are playing brinkmanship over agricultural subsidies in the latest round of talks, which are scheduled to end in the first week of December.

Trade liberalization has also led to fewer, bigger, more efficient manufacturing plants and resource operations. Economies entwine and become interdependent, thus fostering cooperation. This new spirit was dramatically illustrated when the invasion of Kuwait was met with unprecedented multinational resistance, including support by the Soviet Union. Such co-operation shows that it may be possible one day to mount a multinational attack against pollution and poverty.

Unfortunately, this profound change in the world’s economic order is not understood in Canada. Canada is already so far along in this

process of interdependence that our standard of living in future depends strictly upon how astute, and nonprotectionist, we are. Up to one-third of Canadian jobs are directly or indirectly dependent upon trade with other countries. Dependence upon exports means we must continue to open up our market to foreign competition or face retaliation. Such added competition means we must match the educational efforts of others and also retrain dislocated workers to give them more valuable, viable skills. Canadian schoolchildren, for instance, should go to school year-round as do their Japanese counterparts. Similarly, dollars must be spent to upgrade workers thrown out of jobs so that they can offer something more valuable to the marketplace.

Canada is also profoundly dependent upon the world’s debt markets, thanks to the proclivity among politicians in every party to live beyond their means. Canadian governments and corporations collectively owe more than $230 billion offshore, giving us the dubious distinction of having one of the highest levels of foreign indebtedness per capita in the industrialized world, almost $9,000 per person. This national mortgage has driven up taxes, inflation and interest rates, and threatens our competitiveness.

In a global economy, a high-cost country like ours not only sandbags its exporters but cannot attract new enterprises. Our foreign indebtedness is why politicians who talk of lower, madein-Canada interest rates are foolish. So are those who would hike minimum wages, toughen plant-closure rules and increase corporate taxes.

Canada’s challenge is to figure out how to earn more hard currency from foreigners and how to motivate workers to work harder. If not, our standard of living, already on the decline, will fall further in the 1990s. Of course, people do not want to hear such messages and would rather vote for politicians who espouse ostrich economics. Take the case of the GST, a hated but essential reform in an export country such as ours. This type of valueadded tax spreads the tax burden fairly, benefits exporters, is found in 48 countries and is a prerequisite to joining the European Economic Community.

The tax is needed because it replaces the hidden manufacturers tax, which hurt exporters with high costs and gave importers a cost advantage. Still, Liberals and others make hay opposing the tax even though they offer no alternative and many know it is necessary.

Canadians, like King Canute, the medieval monarch who tried unsuccessfully to order the tides to stop coming in, cannot stop the tides of free trade or reject concomitant reforms like the GST. Ostrich economics will bury Canada if voters opt for politicians who would rip up the free trade deal despite the reality that there is no turning back. The world hurtles towards one global economy whether we like it or not. Far from unwelcome, the process of freer trade, trade-offs and sharing the wealth offers the only hope for a planet beset by poverty and pollution. Free trade is not an issue—free trade is a reality. 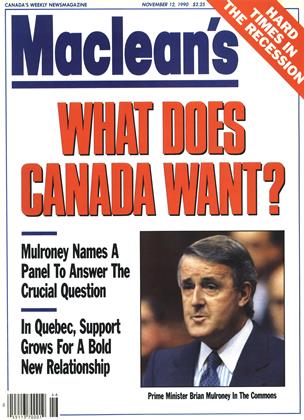