It provoked as much anticipation as a federal budget, and was prepared with almost as much secrecy. But when the Conservative government finally unveiled its long-awaited strategy for the environment last week, the so-called Green Plan more closely resembled the hazy wish list of a throne speech. Environment Minister Robert de Cotret called the five-year, $3-billion plan “a road map” for Canada’s environmental future. In fact, while the document indicated some general directions for federal policy, it omitted most specifics. And. the government’s critics were quick to condemn the plan’s lack of precise new regulations and its failure to impose new sanctions on pollution—measures that many environmentalists believe are essential to halting the degradation of Canada’s environment.

Still, for many analysts, the critical battle to save Canada’s threatened air, water and land-

scape clearly outweighed the political fate of the government. Indeed, some environmentalists were willing to extend plaudits to de Cotret for committing $3 billion to the environment, over five years, at a time when overall federal spending is being severely slashed. But most

observers were simply left perplexed by the absence of any details about how the money would be spent. Indeed, while the government approved the $3 billion in additional spending on the environment, de Cotret or his successors will still have to seek approval for individual programs from the Treasury Board in competition with other government priorities of the day. Said François Bregha, director of policy studies at the Ottawa-based Rawson Academy of Aquatic Science: “Potentially, the Green Plan is quite good, but until we know where the money will be spent, it could just as easily be a great waste of money.”

For his part, de Cotret told Maclean’s that he plans to put flesh onto the skeletal plan during a series of announcements over coming weeks. Within the next month, de Cotret said, Ottawa expects to sign a transboundary air quality agreement with the United States that would formalize each country’s commitment to Controlling acid-rain-causing pollutants. De Cotret has also vowed to introduce 15 new sets of regulations, some as early as 1991, that will govern, among other things, toxic emissions by the pulp-and-paper industry. “If we had tried to negotiate everything in the Green Plan before it was released, we would not have had a Green Plan until 1999,” said de Cotret. But, he added, “In the coming months, you will see announcement after announcement on the environment coming directly from this document.”

In fact, the Conservatives’ Green Plan outlines 120 new and repackaged federal initiatives on the environment—42 of those to begin in 1991. They range from the creation of five new national parks by 1996 to the introduction of a national drinking water safety act, which is intended to encourage the provinces to match guidelines established at the federal level.

Among other intentions signalled in the plan:

• $850 million for programs to clean up Canada’s air, water and land, with a goal of halving the amount of waste that Canadians— now the world’s most prolific producers of garbage—generate by the year 2000.

• $350 million to sustain renewable resources, such as forests and farmlands. The program would include such community-level initiatives as the planting of 325 million trees in cities and towns over the next five years, as well as stricter regulations to protect wildlife and endangered species.

consumption of carbon-based fuels. Nor did de Cotret, who was under great pressure within his own party to meet a self-imposed year-end deadline for presenting the plan, say how much of the newly committed funds would be spent on specific environmental programs. Said Kathy Cooper, a researcher with the Canadian Environmental Law Association: “It is weak, vague and pathetic. Ottawa is calling for voluntary action when the only way to achieve results is by putting laws in place and then enforcing them.”

But de Cotret faced major obstacles to any new laws or taxes. For one thing, provincial governments retain jurisdiction over such critical environmental concerns as municipal waste management. At the same time, responsibility for waste emissions into water overlaps both federal and provincial jurisdictions. As a result,

many of the measures proposed by Ottawa can be carried out only if the provinces agree. But the climate for federal-provincial co-operation is sour. Several provinces, including Quebec, are already furious with a separate federal proposal that would require many provincial development projects to be submitted to federal environmental reviews.

De Cotret says that he wants the provinces—and industry—to contribute additional sums to help pay for the federal government’s ambitious cleanup plans. But many business leaders, already facing the chill of recession and feeling unfairly singled out for blame, have balked at de Cotret’s suggestion. Said Peter Bentley, chairman of Canfor Corp., a forest products company based in Vancouver: “The economy is very tough right now. In British Columbia, cities are still pumping raw sewage into the Pacific, but people find it

much easier to bash somebody else.”

Not all analysts agreed with that assessment. Said Michael Adams, president of Toronto-based Environics Research Group Ltd., for one: “Canadians regard the environment as a health issue, and they want things to be made mandatory, not voluntary. And they will pay environmental taxes as long as industry pays its fair share too.” Clearly, de Cotret’s imprecise Green Plan left many Canadians uncertain about whether Ottawa has taken a strict enough approach to the problem. Only when the federal government fills in the blanks in de Cotret’s statement of intentions will Canadians be able to tell whether the Tories are truly prepared to match public expectations—or their own tough environmental rhetoric. 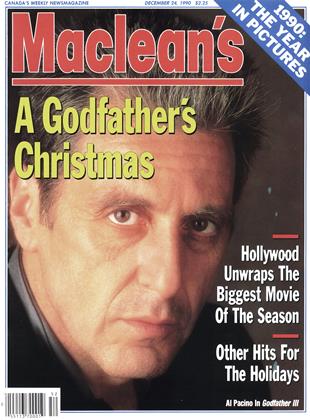