For several years, some local residents have referred to the northern Newfoundland community of Gander as “the hole in the Wall,” a reference to the barrier that once divided East and West Berlin. The reason: small numbers of East German citizens attempting to escape to the West boarded flights bound for Cuba and defected at Gander, a traditional refuelling point for Eastern European airlines. After contacting West German diplomatic officials in Canada, the defectors would then board return flights to West Berlin—and freedom. But since the formidable border defences separating Eastern Europe from the West were swept away last year, the trickle of refugees from Eastern Europe arriving in Gander has become a flood. And unprecedented numbers of citizens of Warsaw Pact nations landing at Gander airport say that they now want to stay in Canada. So far this year, 1,140 travellers have requested refugee status in Gander, com-

The new arrivals, including 790 Bulgarian nationals so far this year—the largest group from any one country—have sparked controversy and a debate over the costs involved in the invasion. The influx of Eastern Europeans has placed a heavy workload on federal immigration services and accommodation in both Gander and 330 km to the southeast, in St. John’s, where the would-be refugees are kept while they await immigration hearings. Philip Field, St. John’s-based director of federal immigration for Newfoundland, said last week that an augmented staff is still processing about 100 of last year’s refugee claimants. As well, Newfoundland Social Services Minister John Efford, whose department pays half the cost of feeding and sheltering the applicants, said the cash-poor Newfoundland government was hard-pressed to cover the costs involved, which amounted to $365,000 in January. Said Efford: “It is not only an adminis-

At the same time, some Newfoundlanders say that they resent the use of tax dollars for people who they suspect have funds of their own and have come to Canada to improve their personal economic situation rather than to escape political repression. Said Bridget Foster, executive director of the Association for New Canadians, a St. John’s agency that helps to house Eastern European immigrants: “It would seem that, in quite a large number of cases, they came for economic reasons.”

For their part, the arrivals in Gander who say that they want to remain in Canada admit that economic conditions in their homelands are grim. But they also argue that the political freedom promised in the wake of the massive changes that have swept Eastern Europe during the past seven months has yet to materialize. Elizabeth Ovanesian, 34, a music teacher from the southern Bulgarian city of Plovdiv, and her 34-year-old husband, Pafi, a mechanic, were two of a group of about 45 who left a Moscow-to-Cuba flight aboard a Soviet Aeroflot aircraft on Feb. 26 and told officials in Gander that they wanted to stay in Canada. Ovanesian, three months pregnant and a temporary resident, has spent 12 days, along with 80 other refugee claimants, at the recently renovated Sinbad’s Motel in Gander, a 120room establishment where double rooms rent for $65 per person per day. She said that she and her husband planned to leave the flight at Gander from the time they left Plovdiv last month. “We hope conditions of life will be better here,’: she told Maclean ’s. She said that, even though the new Communist government in Bulgaria “speaks a lot of new freedoms, it is only words. We don’t know what the future will bring.”

Despite such concerns, Foster said that some of the refugee claimants arriving in New-

foundland seemed to be disappointed by what they saw. “I think some people had been watching a lot of television,” said Foster. “They believed they were going to land in Dallas and see J. R. come out of the woodwork. It’s not quite what they expected.” Meanwhile, the length of time that it takes to process the flood of immigrants and the cost of

looking after them are of growing concern in Newfoundland. Field said that, in spite of an increase from one to 15 in the number of officials hearing refugee claims in St. John’s, it will still be several months before claimants undergo the first of two possible refugeedetermination hearings. It is that prospect that concerns Newfoundland’s Efford, who flew to Ottawa last week to ask Immigration Minister Barbara McDougall for additional funds, amounting to $9 million or more, to help pay the costs of accommodating the refugee claimants and to finance additional support services. According to Efford, McDougall said that she would take his request to the federal cabinet. Efford said that McDougall promised that her department would look into “how to curb the numbers” of would-be refugees landing at Gander.

Still, Efford said that he is opposed to “closing the door” to refugee claimants arriving in Gander, a community of 13,000 that depends on air traffic from Eastern Europe for its livelihood. But Efford expressed concern that, if the flow of Eastern Europeans arriving in Newfoundland increases during the coming year, refugee-related costs could eat up nearly a quarter of his ministry's budget of about $120 million. In a province experiencing a series of downturns in the fishing industry and heightened pressure on welfare costs, that is a daunting prospect. 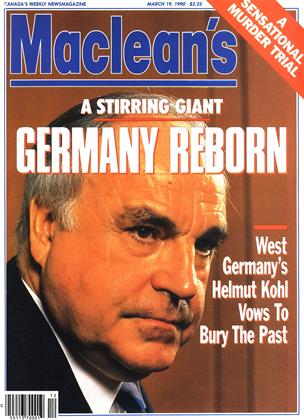