Israeli Labour Party Leader Shimon Peres seemed supremely self-assured. The day after last Thursday’s nonconfidence debate in which hard-line Prime Minister Yitzhak Shamir went down to defeat, Peres forecast that he would soon be able to form a government backed by a comfortable 20-vote majority in the 120-seat Knesset (parliament). And although some political analysts voiced doubts, it appeared that Peres’s optimism might prove justified. Six small left-wing parties—three of them predominantly Arab—and at least two of the four small ultra-Orthodox Jewish parties seemed likely to join a Labour-led coalition. Meanwhile, Shamir’s right-wing Likud bloc was riven by internal dissension, and Shamir himself was left personally humiliated as the first prime minister in Israel’s 42-year history to lose a nonconfidence vote. Asked if that outcome had discredited Shamir even within his own party, one Likud MP snapped, “Especially within his own party.”

The next move in the always-complex Israeli political mosaic was for President Chaim Herzog to consult with all 15 parliamentary parties on the formation of a new government. (Israel’s system of proportional representation means that both Labour and Likud must compete for the support of the smaller parties in order to have a parliamentary majority.) As the victor by five votes after the 10-hour Knesset debate, Peres was likely to get the first chance to assemble a new coalition. Traditionally, that has been a long process. After the inconclusive 1988 election, in which Labour won 39 seats and Likud 40, the two main parties haggled with the minor religious parties for eight weeks before reluctantly joining forces in a so-called government of national unity. This time, the process could be similarly protracted, and even have a similar outcome. But many political observers contend that the issues of war or peace now confronting Israel are so clear-cut that decisions will be reached

The fragile, 15-month-old national unity government, in which Peres was the junior partner, fell apart on March 13. The immediate cause was a dispute over the composition of the Palestinian delegation for proposed talks between Israel and representatives of the occupied West Bank and Gaza Strip. Labour had accepted a carefully worded U.S. formula under which the Palestinian delegation would include at least one person with an office or a second address in Arab East Jerusalem and one whom the Israelis had deported. Likud refused to accept that arrangement, claiming that it would bolster Palestinian claims to East Jerusalem, which Shamir insists must remain part of the Jewish state.

Some critics, both at home and abroad, accused Shamir of looking for any excuse to avoid talking with the Palestinians—even though the subject under discussion would be the local autonomy elections that he himself had proposed for the occupied territories in May, 1989. “Shamir was looking for another excuse to stall,” said William Quandt, Middle East expert at the Brookings Institution, a Washington think-tank. “He wasn’t being forced to say that East Jerusalem Arabs are the same as West Bank Arabs, but even so he wouldn’t play along.” And during last Thursday’s heated debate, Peres declared, “Shamir has one problem—fear to make peace, fear to reach a dialogue with the Palestinians.”

It was one of the Knesset’s religious parties,

Shas, which represents Orthodox Jews of Sephardic origin, that ensured Shamir’s defeat. On Wednesday, after seven hours of heated debate, the indications were that the outcome would be a 60-to-60 tied vote, a nominal victory for Shamir. The next day, Shas’s leader, former Sephardic Chief Rabbi Ovadia Yosef, proposed a compromise. Shas, he said, would

throw its six votes behind Shamir if he would reinstate the Labour ministers he had fired or who had resigned two days earlier and if he accepted the U.S. plan for talks with the Palestinians. Shamir refused, and five of the six Shas MPs abstained, giving Peres a 60-to-55 victory. Declared a jubilant Peres: “I have said time and again that there was a parliamentary majority

for a continuation of the peace process. This vote showed that there is such a majority.” News of Shamir’s defeat received a cautious welcome among Palestinians in the occupied territories. For the past 27 months, they have been waging an intifadeh, or uprising, against Israeli rule. During that period, 630 Palestinians have been killed by Israeli soldiers and settlers, 193 suspected collaborators have been killed by their fellow Palestinians, and 44 Jews have also died. In an interview with Maclean ’s, Faisal Husseini, whom both Israelis and Palestinians regard as the unofficial representative of the Palestine Liberation Organization (PLO) in the West Bank, said, “This government was paralysed from the day it was created.” He added: “We are hoping now to be dealing with a government that can take decisions—to go to peace or to go to war. At least we will know where we stand.” Hanna Siniora, £ editor of the East Jerusalem Arabic daily Al Fajr, was more pessimistic. “What happened I means that there is no peace process. Nothing will develop for at least nine months now.” Judging from past Israeli performance, that assessment could well prove justified. This time, however, there seemed to be a chance that Israel’s minority-party politicians might set aside their special interests and address themselves rapidly to the overriding question of peace—or ongoing war—with the Palestinians. 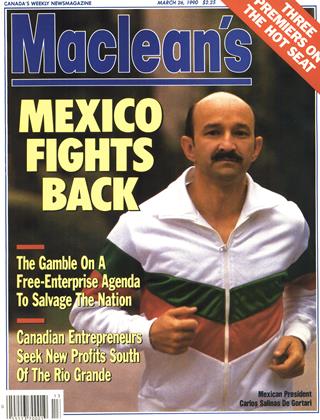