Ever skirts since worn the by 1960s, trendy when English the models miniswept the world of high fashion, North American women have shown a decided ambivalence towards abbreviated hem lengths. Five years ago, when international fashion houses reintroduced miniskirts, most North American women resisted the trend. Despite that attitude, many European and North American designers, who were continuing to unveil their fall lines last week, displayed a variety of skirts, shorts, sarongs and body stockings that were all designed to accent

Still, although the latest fashions will involve decisions on how daring women want to be, they will have a broad spectrum of lengths and styles to choose from. While some European

designers showed full-skirted fashions inspired by the national costumes of Eastern Europe, others offered skin-hugging bodysuits, shorts and cigarette-slim stretch pants. At the fashion shows in Paris, the dominant look was leggy, involving boldly abbreviated skirts and shorts that were sometimes set off by boots. Although American designers, in another echo of the 1960s, showed short shift dresses, Canadian designers presented an especially wide variety, including skirts ranging from wellabove-the-knee to ankle-grazing lengths. Said Montreal-based designer Jean-Claude Poitras: “Skirt lengths should never have been an issue in fashion. What we’re looking at now is a more personal approach to length from each designer.”

Several Canadian designers showed blouses in sheer, see-through materials that revealed backs and even breasts. Industry experts said that the controversial styles all had one underlying purpose—to stimulate public interest after three years of flat sales in the fashion industry. Said Lisa Dalholt, a senior buyer for the Toronto women’s specialty store Creeds Ltd.: “They wanted to do something really extravagant to get the customer back into the store.”

Some designers on both sides of the Atlantic leaned towards autumnal shades of brown and gold. American designer Bill Blass, who showed his fall line in New York City last week, selected hot shades of orange and red for the short, strapless shifts in tweed and flannel and the casual sweaters that models draped around their necks. At another New York show, Calvin Klein also showed short, strapless shifts that were severely unadorned, with subdued colors. For day wear, Klein displayed tailored jackets with short skirts or narrow trousers. Norma Kamali’s collection included long, lean jackets and vests with decorative Oriental detail.

The spring round of international fashion shows began in Milan, where Italian designers displayed a stunning variety of clothes. The garment of choice, to be worn under a coat or cape, was the body-fitting “unitard,” or jumpsuit, and shorts that were made of leather, denim, cotton or wool. Although many Italian designers worked in muted or earth tones,

Following a long-established pattern, many industry analysts rated the Paris shows as the most dazzling of the year. Jumpsuits, body stockings and other formfitting garments found a place in nearly every collection. While designer Christian Lacroix offered an audacious collection of boldly patterned spandex bodysuits, Karl Lagerfeld presented leggings and heavy tights and Claude Montana showed stretch stirrup pants in white and in bold solid colors. At the Paris shows, skimpy pants and miniskirts appeared with jackets, sweaters and coats.

Still, Shelagh Alessi, a Toronto departmentstore buyer, predicted that Canadian women would not accept the extreme skirt lengths. “Even though they’re showing short on the runway,” she said, “they’ll have to make

a concession and ship longer for the Canadian market.”

Cross-cultural ethnic flourishes showed up in many of the Paris collections. Perhaps inspired by the political change that swept Eastern Europe during the past year, the peasant styles included colorful shawls and wraps, fullskirted dresses with embroidery, fringes and tassels that adorned both daytime and evening wear. Yves Saint Laurent, who introduced an ethnic look more than a decade ago, chose Scottish and African themes. He showed black velvet and tartan plaid outfits and leopardspotted dresses.

The collections from more than 400 exhibitors shown at the four-day Festival of Canadian Fashion in Toronto late last month reflected the fact that Canadian designers were inspired by many of the same stylistic themes as the Europeans, while offering customers maximum choice. While short shorts stormed European runways, Canadian designers took a more conservative approach. The Toronto-based design house Clotheslines displayed knee-length shorts that many Canadian women might accept for day wear.

The variety of styles was partly a reflection of the difficult times that the garment industry has faced in recent years. In the year ending December, 1989—the latest period for which figures were available—retail sales of women’s clothing grew by only 2.9 per cent from the year before. When the five-per-cent inflation for that period is taken into account, it meant that sales actually declined. Said Mel Fruitman, vice-president of the Retail Council of Canada: “We have to give the consumer what she wants.”

Judging by buyers’ reactions, Canadian women will welcome some of the new style trends. Alessi predicted that the loosely cut, three-quarter-length coats shown by many designers would catch on because “the shape is so wonderful and flattering.” For her part, Dalholt liked the use of stretch fabrics in stirrup and straight pants. Said Dalholt: “This is the look for the 1990s. Women today have better-toned bodies. They exercise and they watch their nutrition.” As for miniskirts and short shorts, industry analysts said that most Canadian women would likely reject them and choose among the other styles offered by a fashion industry eager to find favor with a discriminating public. 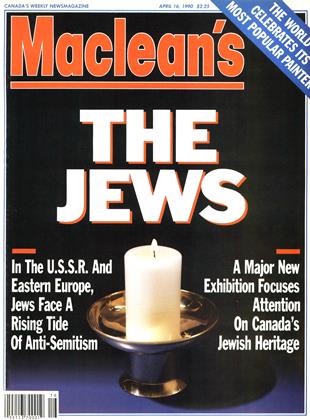