His supporters call him “the golden boy with the silver tongue.” His detractors call him “the Welsh windbag.” Clearly, Neil Kinnock’s powerful oratory, more than his experience or ideological convictions, is his most potent political weapon. Kinnock, 48-year-old son of a Welsh coal miner, was elected leader of Britain’s fractious Labour Party in October, 1983, four months after Labour suffered a devastating loss to Margaret Thatcher’s Conservatives in national elections. Since then, Kinnock has presided over a remarkable recovery in the party’s fortunes: it now has a nearly 20-percentage-point lead over the Tories in publicopinion polls. And, after the party’s success in local elections last week, Labour now has a solid chance of sweeping to victory in the next general election, due no later than mid-1992. But many Britons still openly question whether Kinnock, who in November will become the longest-serving opposition leader in British history, is prime ministerial material.

Labour’s popularity among the British middle class is a result, in part, of Kinnock’s pragmatic leadership. He was allied with the party’s leftist faction in the 1970s but, since

becoming leader, he has pushed through policies that have moved Labour towards the political centre. The party has also benefited from a backlash against Thatcher and her immensely unpopular poll tax, which requires nearly all adults to pay a uniform community charge. Kinnock calls the tax “regressive,” and he has promised to repeal the law if Labour forms the next government. Still, some analysts claim that Kinnock will have to articulate a clear alternative to Thatcher’s policies if he hopes to maintain the party’s lead into the next elections. Said Anthony King, professor of government at Essex University: “People are concluding that they don’t like Conservative policies and think that Labour must be able to do better. But they don’t have the faintest idea what Labour actually stands for.”

Poverty: Kinnock comes from a family that his predecessor as Labour leader, Michael Foot, once described as “absolutely genuine working-class.” He was bom in a single rented room in Tredegar, a mining community in South Wales. His father, Gordon, an active Labourite, worked in the mines and took Kinnock to his first political meeting when he was eight years old. There, he was inspired by an

earlier legendary Welsh orator, Labour MP Aneurin Bevan. Kinnock’s mother, Mary, a nurse, often took her son on her house calls to show him the illness and poverty among the valley’s miners. Kinnock has said that his childhood experiences, “translated by two very intelligent parents [and] backed up by attendance at meetings addressed by Bevan,” impelled him to join the Labour Party.

Convictions: In University College at Cardiff, Kinnock was at best an adequate student: he failed his final exam in industrial relations on the first try, and just barely passed on the second. But he made his mark in university politics as president of the Students’ Union and chairman of the Socialist Society. It was through those groups that he met Glenys Parry, the daughter of a railway signalman from North Wales. Kinnock and Parry married in 1967 and have two children, Rachel and Stephen. Kinnock, an avid rugby fan who has said that he aspires to sing in a choir after he retires from politics, often spends his Saturday nights watching videos with his children. Glenys, a part-time teacher, was active in the Labour Party long before she met her future husband. And friends say that her strong social-

ist convictions and political instincts have had a profound impact on Kinnock’s career.

After their marriage, the Kinnocks moved to the South Wales constituency of Bedwellty (now Islwyn), where he worked as a tutor for the Workers’ Educational Association. Two years later, the local Labour MP, Harold Finch, resigned, and Kinnock decided to launch his political career. His detractors maintain that he moved to Bedwellty, one of the country’s safest Labour seats, in anticipation of the 71-year-old Finch’s resignation.

At the nomination meeting, Kinnock and his rival, Lance Rogers, won 75 votes each. Kinnock’s supporters advised him to delay the runoff, but Glenys urged him to forge ahead. Accepting her advice, Kinnock gave an impassioned speech that broke the deadlock, giving him a two-vote majority. In 1970, at 28, he took his seat in Parliament.

For the next 13 years, Kinnock won little public recognition. He worked as private parliamentary secretary for Foot, then secretary of state for employment, in 1974 and 1975. But, the following year, he turned down an offer from thenPrime Minister James Callaghan of a junior ministerial post, accusing the Labour leader of being too rightist.

He did join the party’s National Executive Committee in 1978 and, after Labour’s defeat in the 1979 elections, became education critic.

Radical: In 1980, Kinnock supported Foot in his successful bid for the leadership.

But in the early 1980s, Foot allowed the party to slide towards the radical left. Leftists, including Anthony Benn, pushed through constitutional changes that gave unions a powerful voice in electing party leaders. The party also adopted unpopular policies, including a pledge to get rid of all nuclear weapons and pull Britain out of the European Community.

Meanwhile, radical Labour activists won control of more than 20 town councils and enacted policies that led Tories to describe them as the “loony left.” Some town councils flew the flag of the African National Congress, while others only served coffee from revolutionary Nicaragua at town halls.

The leftward lurch split the party, as Labour’s right wing broke off to form the Social Democratic party. And many middle-class voters abandoned Labour. In the 1983 election, the party won only 28 per cent of the vote, marginally more than an alliance between the Social Democrats and the Liberal party. Some observers predicted that the alliance would soon eclipse Labour as the official opposition.

By then, Kinnock had emerged as a leader of the so-called soft, or realistic, left. He said that,

although he enjoyed idealism, “you can’t live in it, you can’t eat it, you can’t lie in it, you can’t cure diseases with it, and it’s these tangibles we are about.” Meanwhile, Benn, Kinnock’s main leftist rival, had lost his parliamentary seat. And in the ensuing leadership race, Kinnock, still relatively unknown outside the party, surprised many voters by winning a resounding first-round victory. Then, he forged an alliance between the soft left and those rightists who had chosen to remain in Labour.

Challenges: He faced challenges to his authority, particularly during the bitter 1984-to1985 miners’ strike, when thousands of workers walked off the job to protest the Thatcher government’s decision to close unprofitable coal pits. The Labour Party voted to support the strikers, despite Kinnock’s objections. He argued that, while he opposed the closing of the pits, he wanted to separate the party from widespread strike violence.

By 1986, however, Kinnock had managed to rein in the hard left and forced members of Militant Tendency, a Trotskyist group, out of the party. Kinnock succeeded in shaping a more politically palatable platform, all but usurping the centrist position of the LiberalSocial Democratic alliance. Before the 1987 elections, Labour soared to higher than 40 per cent in opinion polls and scored major victories in local elections. But the economy was healthy, real earnings were growing and inflation was under five per cent—all factors in Thatcher’s favor. Although Labour won only 31 per cent of the vote, it maintained its position as the official opposition.

monetary system and fully supports a charter that would establish social security standards throughout the Community. Domestically, Kinnock has proposed changes to reduce the voting power of unions within the party. Labour has scrapped its commitment to a special wealth tax; it now proposes a reform of incometax laws that would lower the starting rate to 20 per cent from 25 per cent and introduce new tax brackets in which high-wage earners would pay up to 50 per cent.

Labour’s finance critic, John Smith, has persuasively argued Labour’s economic policies. And according to a recent poll by a Londonbased magazine, The Economist, British economists say that Smith would do a better job than the Conservative’s current chancellor of the exchequer, John Major.

Still, Labour may not have done enough to clarify how it would achieve various policy goals, including controlling interest rates, improving education and health services, and providing an alternative to the poll tax. Kinnock faced an embarrassing resurgence of leftist militancy when nearly 30 renegade Labour MPs called on Britons to refuse to pay the tax.

Critics: The opposition leader’s critics, meanwhile, maintain that his lack of experience in government will make him an ineffectual leader. Said Richard Johnson, a professor of politics at Oxford University: “This is an immensely ambitious program for a government in which the prime minister and fourfifths of the cabinet will be g lacking in government g experience.”

0 And, although Kinnock is a ¿ powerful orator—so powerz ful that U.S. Senator Joseph

1 Biden dropped out of the Democratic presidential race in 1987 after he confessed to plagiarizing the Labour leader’s speeches—he is prone to embarrassing missteps. Last month, at a concert at London’s Wembley Stadium to honor South African nationalist leader Nelson Mandela, Kinnock thrust his fist into the air in a black-power-style salute. “He is always making wild gestures,” said Cyril Smith, a Liberal MP. “But if he wants to be prime minister, God forbid, he must learn to stop such childish conduct.”

Despite those criticisms, Labour’s strong showing in municipal elections demonstrated that it has its best chance in a decade to unseat the Tories in the next general election. Then, the fiery Welshman might finally trade his modest redbrick home in the west London district of Ealing for the more impressive address of 10 Downing Street.

MARY NEMETH with JEREMY HART and ANDREW PHILLIPS in London 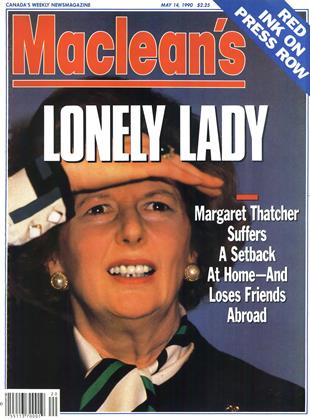