Lise Bacon, Quebec’s minister of energy and resources, seemed about to lose her temper. She emerged last week from a special session with her cabinet colleagues, convened to discuss HydroQuébec’s chronic labor problems, and she quickly declared that she had grown tired of the bitter, 16-month-long dispute that is crippling the province’s giant electricity-producing utility. “The conflict has gone on long enough,” she said. “It’s high time people settled these negotiations.” With that, she ordered the warring representatives of the publicly owned corporation and 14,000 unionized trade, technical and office workers to resolve their dispute within days, or face the prospect of mandatory back-to-work legislation. Added Bacon: “The situation is serious. We cannot wait for it to become dramatic before we act.”

The situation at Hydro-Quebéc is already dramatic. And while the utility’s continuing labor wars are part of the problem, they are symptomatic of a much larger dilemma. The Crown corporation, a $34-billion behemoth employing 20,000 people, is the heart of the Quebec government’s economic plan for the future. With electricity sales in Quebec of $5.2 billion, and sales of $308 million to the rest of Canada and the United States, it accounts for roughly five per cent of the province’s gross domestic product. It also has a $23-billion longterm debt, and no Quebec government can allow it to be under siege. But now it is facing severe problems that, in recent months, have converged to tarnish the image of an institution that was once the living symbol of modem Quebec’s technological prowess. Concedes Hydro-Québec spokesman Jacques-Andre Couture: “I think it is true that, for several reasons, we are suffering from a crisis of confidence in the public eye.”

one of the reasons. Others include the fact that HydroQuébec is under attack from many of the system’s three million long-suffering domestic consumers. They not only have to endure poor service from much of its distribution network, but they are paying 7.5 per cent more for their power than they did a year ago. Environmentalists, both Canadian and American, have launched widely divergent actions aimed at curtailing the corporation’s ability to sell electricity at home as

the Canadian Union of Public Employees, who have been engaged in a series of rotating strikes since October to press demands for average annual six-per-cent wage increases, is

well as export it abroad. At the same time, native groups based in the James Bay area of northern Quebec, where the key to future hydro expansion lies, are challenging the utility

in the courts and by means of a sophisticated media campaign. The federal government is also engaged in a jurisdictional dispute with Quebec over environmental studies on the proposed second phase of the massive James Bay project, covering an area the size of France.

Still, Hydro-Québec is pressing ahead with plans to invest $50 billion over the next decade to develop two gigantic projects in the region that will eventually generate 11,460 megawatts of electric

power. The project would also create thousands of jobs.

Construction has not yet begun, but the 3,060-megawatt Great Whale project is scheduled to be in place by 1998. The 8,400-megawatt Nottaway-Broadback-Rupert project is targeted for completion by 2006. Both follow the $13.7-billion, 10,282-megawatt first phase of the James Bay development—the La Grande I project—which was completed six years ago. If the two new projects are implemented, Hydro-Québec will have

the ability to generate, and dispose of, 26,000 megawatts of power.

At the moment, however, it is unclear whether either of the two projects will be carried through to completion. Indeed, even financing for the construction is in doubt, because foreign investors have recently shown some reluctance to buy Hydro-Québec bonds. The forces arrayed in opposition to the whole project are formidable, and none is more determined than the 10,000 Cree who inhabit the area and want to stop it.

The Cree, along with neighboring tribes of Innu, earlier this year embarked on a campaign to sway public opinion against Hydro-Québec’s plans. The most dramatic publicity measure involved hauling a giant canoe across frozen ground to Montreal from James Bay and then paddling it all the way to New York City over a six-week period. Acting alone, the Cree also launched an action in the Quebec Superior Court on April 3 to win an injunction to stop construction because they claim that the pro-

ject will destroy their traditional lands. Said James O’Reilly, a Montreal lawyer who is acting on behalf of the Cree: “This is a fight for survival.”

The jurisdictional dispute between Ottawa and Quebec over who has the right to conduct project-related environmental hearings is another obstacle. It has placed federal Environment Minister Lucien Bouchard, a Quebec nationalist, in opposition to provincial Environment Minister Pierre Paradis, one of the strongest federalists in Quebec Premier Robert Bourassa’s cabinet. The two men spoke by phone last week, but failed to break the deadlock. Paradis said later that “the differences are major,” adding that, if an agreement is not reached in early May, Quebec will unilaterally proceed to conduct its own environmental hearings.

Meanwhile, Hydro-Québec is facing another set of public hearings next week. On May 8, a Quebec parliamentary commission is scheduled to begin an inquiry into the longterm future of energy policy in the province, during which the environmental impact of hydroelectric power, as well as the economics of power exports, will be raised. Officials at Hydro-Québec have publicly welcomed the inquiry, claiming to be open to any suggestions that are presented. “At some point, the public is going to have to decide the best means to cope with the constantly increasing de£ mand for electricity,” says £ Hydro-Québec spokesman I Couture.

Meanwhile, the utility has embarked on a number of programs to refurbish its blemished image. It launched a $4.2-billion program to upgrade its distribution network, a neglected facility that resulted in 16,735 power failures last year. On average, Hydro-Québec’s consumers were deprived of electricity for four hours and 31 minutes last year. The utility is also implementing a $ 1.8-billion plan to reduce domestic energy consumption by seven per cent by 1999, largely through the promotion of energy-efficient electrical fixtures and appliances. The initial step in that program was taken last week with the introduction, at half the normal retail price, of an energy-efficient shower head—the first of 30 new products that the utility will sponsor in coming months. For Hydro-Québec’s long-suffering consumers, the steps are welcome. But the company will likely have to take much more dramatic steps to restore its internationally renowned image. 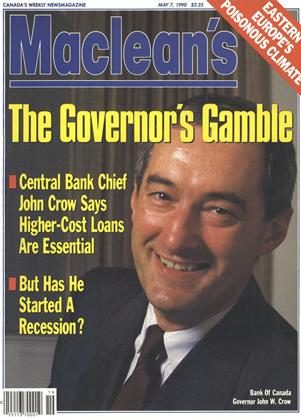