Carrie Lazarenko says that she is a committed sunbather even though her blond hair and fair skin make her susceptible to sunburn. Three times a week, the 19-year-old Winnipeg woman visits an indoor tanning salon in the beauty shop where she works. As well, Lazarenko sunbathes outdoors during the summer—and she says that she rarely uses protective sunscreen lotion. “I’ve always liked a good tan,” said Lazarenko. “It makes you feel good and look much healthier.” Like Lazarenko, thousands of Canadians go to tanning salons and, in spring and summer, outdoors to soak up the sun— despite growing evidence that ultraviolet (uv) rays can cause serious health problems, including cancer. Experts say that many sunbathers, both those who visit tanning salons and those who tan outdoors, believe that tanning slowly without burning is safe. But dermatologists, including Dr. Gary Sibbald, acting head of dermatology at Women’s College Hospital in Toronto, say even that is dangerous. Declared Sibbald: “No tan is a safe tan.”

For years, medical experts have known that prolonged exposure to the sun can cause a wide range of medical problems, ranging from wrinkling of the skin and temporary blindness to fatal skin cancer. But during the past seven years, as scientists have reported an erosion of the earth’s stratospheric ozone, which screens out some UV rays, the number of Canadians suffering from two types of usually nonfatal skin cancer has doubled. (There is no firm proof that the thinning ozone has contributed to the increase.) Between 1983 and 1988, the number of cases of nonfatal basal cell and squamous cell carcinoma climbed to 40,000 from 20,000 cases.

At the same time, the incidence of malignant melanoma, a sometimes-fatal skin cancer, is also rising, with

Some doctors and scientists do, in fact, attribute the increase in skin cancer in part to the weakening of the ozone layer—a belt of gas more than five miles above the earth’s surface that absorbs solar radiation. Many scientists blame manmade chemicals called chlorofluorocarbons (CFCs), which are used in some aerosol cans, refrigerators and air conditioners, for the damage. Scientists estimate that during the past decade, about three per cent of the ozone has been lost. And that may make sunbathers more vulnerable to UV rays.

But doctors say that many people are not taking the potential danger seriously. Dr. Richard Haydey, an assistant professor of dermatology at the University of Manitoba Medical School in Winnipeg, said because of a lifestyle that encourages sunbathing, “we’re now seeing people in their 20s and 30s with the same damage we used to see with people in their 50s and 60s.” Although most people associate tanning with good health, doctors now say that the sun’s rays may cause serious damage to the body. The sun emits ultraviolet radiation in a range of wavelengths. The longest ultraviolet rays, called UVA,

penetrate the skin most deeply, promoting cancer and a process known as photoaging, which causes skin to become wrinkled and blotchy. UVA may also harm the skin’s immune system by destroying Langerhans cells, which form part of a surveillance system that alerts the body when it is threatened by disease. Shorter rays, known as UVB, are responsible for sunburn and also contribute to photoaging. Currently, stratospheric ozone filters out about 90 per cent of the sun’s damaging ultraviolet rays. But some scientists say that if the destruction of the ozone layer continues, that could cause more health problems.

Even if the ozone layer had suffered no damage, dermatologists say that people would still be at risk in the sun.

When ultraviolet rays strike the body, the skin reacts by dispersing the pigment melanin, wmich absorbs and scatters excess radiation. At the same time, melanin darkens the skin. Scientists say that individuals react to the sun in different ways because the amount of melanin varies with racial background. Black people and others with dark skin have an abundance of melanin, which provides a greater natural protection against UV rays, according to Dr. William Danby, secretary-treasurer of the Kingston, Ont.-based Canadian Dermatology Association.

But because people with lighter skin have less melanin, they are more vulnerable. Said Dr. John Arlette, a dermatologist at Foothills Hospital in Calgary: “All white people should be aware that the more sun they expose themselves to, the greater their risk is of cancer—and of being wrinkled, with skin that looks like a weather-beaten old shoe.”

Some doctors say that the risks of serious illness also depend on individual exposure to the sun. Sibbald said that people who work outdoors may have less risk of developing melanoma but stand a greater chance of developing other kinds of skin cancer. And doctors say that people who go in for short periods of intense exposure to the sun on weekends or during vacations may run an increased risk of melanoma as a result.

Some dermatologists say that the people who need the greatest protection from the sun’s rays are children. The reason: up to 80 per cent of the average Canadian’s lifetime exposure to the sun usually occurs before the age of 20. According to experts, one bad sunburn during childhood may double the risk of skin cancer later in life. Said Haydey: “It’s really important that we take extra precautions with small children and infants,

because they can’t protect themselves.” Perhaps partly as a result of widespread ignorance about the dangers of sunbathing, thousands of Canadians are diagnosed each year as having some form of skin cancer. Basal cell carcinoma affects about one in seven people. It starts as a small, translucent bump that may have tiny, threadlike blood vessels through it. It is usually found on parts of the skin that have been exposed to the sun, including the face, ears, neck and arms. The bumps often ulcerate and bleed and, untreated, they can damage nearby tissues. Less common is squamous cell carcinoma, which affects about one in 50 people. Like basal cell carcinoma, it is more common on sun-exposed skin, appearing

Malignant melanoma, the form of skin cancer most difficult to treat, is often heralded by changing moles—round, brown bumps on the skin. Doctors say that irregularly bordered or asymmetrical moles may be a sign of melanoma. As well, areas of black, blue or white in moles may signal trouble, as may moles larger than a quarter of an inch in diameter. If doctors detect melanomas early enough and surgically remove them, there is usually a good chance of a complete cure. But if it is not checked, the cancer can spread into other organs, at which point, Sibbald says, radiation and

drug treatment do not always provide a cure.

Ultraviolet rays may also injure eyes. Some doctors say that radiation, reflected by water or snow, can damage the outer layer of the cornea, which filters out some UV rays. According to Dr. David Rootman, a corneal specialist at Toronto General Hospital, there is also evidence to suggest that exposure to UV rays may lead to cataracts, which gradually result in a clouding of the lens within the eye, and in some cases to corneal cancer.

Despite an international agreement aimed at limiting the use of chemicals that are suspected of damaging the ozone layer, scientists predict that the incidence of skin cancer will continue to increase. David Wardle, a research scientist at Environment Canada’s atmospheric environment service in Toronto, claims that the loss of stratospheric ozone during the past 15 years may have slightly contributed to the increase. Said Wardle: “It’s fairly definite that if you decreased the ozone level by one per cent, you’d get an increase in cancer of about three per cent.” Damage to the ozone during the 1980s, said Sibbald, may “add to the increase in cancer we’ll see at the end of the century.”

Apart from avoiding the sun’s rays, doctors say that clothes and sunscreen lotions are the best forms of protection. As well, they say that even when wearing a strong sunscreen, sunbathers should avoid prolonged exposure between 10 a.m. and 3 p.m., when rays are the strongest. At the same time, some doctors say that tanning salons are more dangerous than the sun itself. The sunlamps used in some salons, said Danby, emit almost pure UVA rays. Those devices “should be outlawed,” he added. “They’re like cigarettes—when used as directed, they may cause cancer.”

There are indications that at least § some Canadians are starting to take g the dangers of the sun seriously. George Cugini, a group business director at Mississauga, Ont.-based Scholl-Plough Canada Inc., which manufactures Coppertone products in Canada, said that during the past year, sales of the firm’s stronger sunscreens almost doubled over the previous year. “Consumers kept hearing about the thinning ozone layer and skin cancer increases,” said Cugini. “And they put the two things together.” Despite that trend, most experts say that many Canadians will continue to expose themselves to the sun— and, as a result, they do not expect any levelling off in the incidence of skin cancer in the near future. That, they say, will only happen when Canadians accept the fact that tanned skin is not necessarily a sign of health. “If we don’t change society’s sun habits,” declared Sibbald, “the epidemic of skin cancer will continue.” 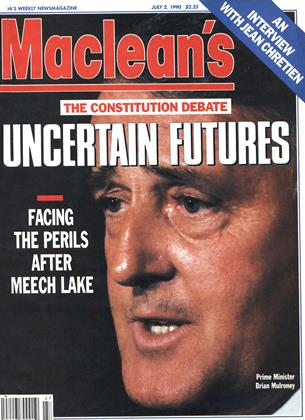