Tourism is down and French-English tensions are up—especially in the nation's capital. And although a spokesman for Ottawa Mayor Jim Durrell's office insisted that the action has nothing to do with anti-French feeling, the city is proposing to drop the name of Hull from what has been promoted for years as the Ottawa-Hull tourist region. Hoteliers in the capital have threatened to withdraw their $80,000 in annual fees to Ottawa and Hull Tourism Inc. if the change is not made. And they complained that Hull's $4,000-a-year contribution to the cause is too little. Hull Mayor Michel Légère, who is an avowed Quebec nationalist, has consistently supported the joint tourism effort. But now he declines comment. Said Jeffrey Polowin, a spokesman for Durrell: "It has nothing to do with being antiFrench. We should be promoting one name. In the States, do they promote Washington-Arlington? We promote it now as Ottawa-Hull. When people read that they wonder, 'What's a Hull?' "

GETTING OLDER, NOT HIGHER

The average age of Nova Scotia’s RCMP constables has risen to the point that their morale is suffering. Half of them are 35 or over, and the force’s senior ranks are full. Constables, whose top pay rate is $47,300, have to wait an average of 17V¿ years for a promotion. Said Canadian Police College psychologist James McGinnis: “These men need a badge of success. They want to be promoted. ” Added Sgt. James White: “My men are walking time bombs. We have to make changes. ” Early retirement, anyone?

A penny earned is a chip off the old national debt. At least that seems the philosophy of Rick Arlt, a real agent from Newmarket, Ont., who has made alleviation of Canada’s $380-billion national debt his special mission. In 1989, Arlt started an organization called Bank on Canada, dedicated to reducing the debt through such fund-raising projects as lotteries, garage sales and corporate donations. Until now, Arlt had not raised any money, but some companies have contributed stationery and posters, and Purolator Courier Ltd. has donated its services. And last week, Newmarket restaurant owner Frank Vaxevanis became the first businessman to help out by donating one day’s proceeds from sales

Toronto residents opposed to Tridel Corp.'s proposed 32storey condominium on Bay Street have added a weapon to their arsenal of objections. They say that they plan to urge Ontario's Mississauga Indians to assert a claim that the land is an ancient burial ground. One resident has conducted a study that he says proves the existence of the site. But city officials dispute the location. Said Tridel vice-president Austin Page: “There is nothing to it. They searched the title with eagle eyes, with spyglasses." He added, “There is no justification for a claim of that nature. " A traffic-stopping standoff in the making.

The homes of such Canadians as Stephen Leacock and Lucy Maud Montgomery have been preserved for posterity by heritage groups. But the summer cottage of another famous Canadian is up for sale. Perched on a knoll overlooking Ontario’s Georgian Bay is the kitschy shrine that Harold Ballard created for his Toronto Maple Leafs. And according to real estate agent Stanley Corbeau, the property is well worth the $700,000 price tag. Corbeau said that the cottage is “beyond description.” The buildings boast bright blue roofs, and the _ rooms have white

tile floors with blue maple leaves. The garden has 160 blue-

and-white birdhouses. And totem poles and ships’ masts sprout from the lawn. Said Corbeau of the abrasive Maple Leafs owner, who died last spring: “He loved flowers and birds, so he can’t have been all bad.” Ballard, who once owned the Hamilton Tiger-Cats football team as well, also decorated the property with Tiger-Cat logos. Corbeau, acting for Ballard’s estate, said that he has a profile of the prospective buyer in mind: “It’ll be some guy that’s cuckoo about the Toronto Maple Leafs. I’m hoping one will come along.” All the place needs is a few garden gnomes on skates.

A HIGH-MINDED BATTLE FOR FREEDOM

Toronto's Now magazine, which is facing procurement charges because it accepts ads placed by prostitutes, is not the only magazine in North America that is fighting for what it claims to be its freedom of expression. High Times is a New York City-based magazine that extols the virtues of marijuana use and cultivation. Recently, a grand jury in New Orleans began investigating the publication because it ran ads for the Seed Bank, a Dutch mail-order supplier of marijuana seeds. Civil libertarians say that the magazine, which is banned in Canada, is suffering harassment. High Times editor Steven Hager says that he is the victim of a conspiracy to outlaw the drug. He added, "We're the number 1 target of the U.S. Drug Enforcement Agency.” The DEA frowns on smoke signals.

A thirst for violence

Ever since the Coca-Cola Co. promised Dwight Eisenhower that it would deliver Coke to American soldiers, wherever they were, for a nickel a bottle, wars have been going better with Coke. The price has gone up, but the tradition lives on in the Persian Gulf. The company recently donated 20,000 cases of Coke to the war effort and then sat back to bask in the limelight as TV networks back home ran footage of hot, dusty soldiers quaffing Coke. Now, the company is concluding a lucrative deal that will make the soft drink a regular part of the soldiers’ diet. Coca-Cola spokesman Randal Donaldson acknowledged that the exposure will be good for business. And some members of the 82nd Airborne Division wrote Coca-Cola to say that it will be good for morale: “We are allAmerican soldiers and will settle for nothing less than the real thing.” It beats tepid water.

Halifax West MP Howard Crosby will not let sleeping dogs lie. After failing to convince the courts in January

that the seat belt in his 1988 Oldsmobile did not meet the legal definition of a seat belt and that he did not have to wear it, Crosby paid a $35 fine. Now, he says that he has received a recall notice for the belt—proving, he claims, that the judge wrongfully convicted him. Said Crosby: “It's typical of a country judge operating off the seat of his pants. " Fighting words. 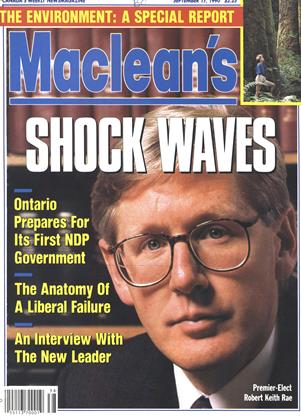