As a Canadian, I am ashamed of what happened at Oka (“The fury of Oka,” Cover, Sept. 10). The symbolism of army tanks with guns directed at the Mohawks is as powerful as it is appalling and showed how helpless the different levels of government are in dealing with the aboriginal issue. If the FrenchCanadians are a distinct society—and they are—we finally have to recognize that our natives are too—both distinct and a society.

There is tremendous irony when a francophone population apparently wanting sovereignty, or at least distinct-society status, does not understand or tolerate similar Mohawk aspirations. The irony is further enlarged by the sight of the Canadian army rescuing Quebecers and Mohawks from each other. Will Quebecers who screamed for army intervention at the Mercier Bridge understand English Canada’s reaction if a sovereign Quebec ever tries to deny Canada access to the St. Lawrence Seaway?

Finally, Canada’s native people have captured the attention of the media. The issues are familiar: the right to land and self-government. The approach is different: militant confrontation. Natives have been irrevocably characterized in the guise of the Mohawk Warriors. Their leadership is not comprised of warriors with guns, but of people with dignity, patience and gentleness. All Canadians would benefit from seeing the faces of these native people on the cover and knowing more about the evolution of their full participation in society.

Your article quotes Mulroney as saying that his government has “spent more than any other government in the world spends on native peoples.” That is simply a restatement of the problem. Native people do not need token monetary amounts given to them for something wrongly taken from them. Instead, the government should be working with, not on, native people to solve issues far bigger than being given pieces of land with little real control over them.

THE MARK OF A MAN

I disagree with the way you took my remarks on Mikhail Gorbachev out of context (“Bad grammar bites back,” Opening Notes, July 30). Yes, Gorbachev does make grammar mistakes, but he is also one of the few Russian leaders able to ad-lib and address the people directly, rather than read from a prepared text. Unpolished language is not a threat to a worldfamous leader, but bad journalism may be a menace to a good-quality magazine.

In “The wary tourists” (Business, Sept. 3), you say that along with sunshine and a $30million ad budget, there has been “ample accommodation” for travellers in Canada. Wrong. Via Rail’s ability to accommodate was reduced by a whopping two-thirds, including the invariably sold-out transcontinental trains heavily patronized by U.S. visitors. There is a widespread belief that the only remaining way to see Canada is by bus, which is too dreadful to contemplate.

It is not only high prices for gasoline and lodging that are keeping the tourists away from Canada. We have the facilities in place and fabulous places to go, but efficient and courteous service, along with treating the customer with respect, is all too often absent. Until that happens, foreign tourists will continue to stray and Canadians will continue to flock abroad in droves.

WHAT IS THE DIFFERENCE?

I find myself in a bit of a quandary. I agree with all those who condemn Saddam Hussein’s attack on Kuwait—it is indefensible, naked aggression (“A dictator’s grim defiance,” World, Sept. 3). But in what way is it significantly different from the United States’ conquest of Grenada, the United States’ intervention in Vietnam, the support of the contra mercenaries in their attacks on the Nicaraguan people, or the invasion of Panama?

Does pride go before the fall? As you point out, Iraqi President Saddam Hussein obviously sees himself as a present-day Nebuchadnezzar ruling over a neo-Babylonian empire. Before he rebuilds the ancient imperial city and boasts too loudly of his own power and majesty, he should read the biblical account of Nebuchadnezzar’s fall. History does repeat itself.

When Saddam Hussein sent his troops into Iran a decade ago, he was militarily and technologically supported by the same countries—notably Britain, France, the United States and the Soviet Union—that are now ganging up on him. If he is such a villain now, as U.S. propaganda wants us to believe, how could he have been an OK guy then? Probably because the United States saw him as capable of toppling the Khomeini government in Tehran without a single American casualty. The eight-year IranIraq war caused the deaths of more than a million Iraqis and Iranians. As for the billions of dollars of damage the war caused, well, that was good for business in the West. The United States also alleges that it favors democratic governments, but it supports the autocratic, oligarchical government of Saudi Arabia and, until recently, that of Kuwait. U.S. hypocrisy knows no bounds, but the scariest part is that so few people recognize it.

The fact that a percentage of homosexuals are left-handed is coincidental and not enough to base even the most imaginative hypothesis on (“The hands have it,” Sexes, Aug. 6). Scientists are wasting their time and energy with such irrelevant research. Accept the differences in the human race and perhaps peace can be achieved, and we can concentrate our efforts on curing the sick and rejuvenating our dying planet.

Was the sample size of this survey actually only 70 people? If so, it is no wonder that the finding did not fit the norm for the general population.

After reading “The hands have it,” one is left to wonder what future in-depth studies will unearth in the weeks to come. Being lefthanded in a predominantly right-handed society has always been a nuisance to a degree, such as using scissors and can openers that are designed for the convenience of right-handed folks. Left-handers must even adapt to reading and writing from left to right, when it is more natural from right to left. Perhaps all this adjusting has been putting an unfair strain on us lefties. Are we now to put up with the strain of more psychological and biological studies, or more conclusions that the environment is not necessarily irrelevant, or even that biology is not irrelevant?

While Peter Newman’s criticism a while back of Clyde Wells raised the ire of a lot of people (myself included), I must admit that I have virtually no quarrel with his assessment of Victor Rice (“Victor Rice gives capitalism a bad name,” Business Watch, Aug. 27). I would disagree a bit on his terminology—“Victor Rice gives capitalism a bad name.” It would be more appropriate to say that “Rice makes the capitalist image even worse.” Capitalism as it is currently practised is certainly not overburdened with respectability, as many Eastern Europeans are fast finding out.

Regarding the problem of the “sick-building syndrome” (“Unhealthy buildings,” Technology, Aug. 13), Ole Fänger suggests that “it will take a complete change in our philosophy and thinking about buildings.” Why not have buildings where the windows could be opened?

By limiting its study of potential electromagnetic health hazards to leukemia, the federal government is indeed limiting the scope of its findings (“Tension in the air,” Health, Aug. 6). Decades of statistical studies in the United Sates and Europe have shown that exposure to electrical fields has produced much higher than normal levels of epilepsy, meningioma, primary brain tumors, ovarian and testicular cancers, miscarriages and birth defects. Throughout each study in the United States, the power companies sought to deny any possible link between their product and those suffering ill effects—a whitewash job reminiscent of that carried out by the tobacco industry. This is natural, since to admit culpability would result in lawsuits that would affect the price of electricity to all of us. It is good to know that Canada is finally catching up, but it is clearly a case of too little, too late.

If there is a link between high-voltage power lines and leukemia, most power utility giants will deny it all the way to the bank. When Manitoba Hydro was planning its aborted 500 kilovolt line to Nebraska, officials assured us that the electrical field from the line was no more dangerous than our household appliances. But none of our appliances will light up a fluorescent tube at any distance, while a highvoltage line will light up a tube just 30 m away. The average citizen has no recourse when high-voltage lines are strung beside residences, through school yards and playgrounds, or beside industrial complexes.

Calf roping and other inhumane events at rodeos are something cowboys have been discouraging for years (“A burdensome battle,” Law, July 30). They have forwarded numerous petitions against events that give rodeos a bad name, but have been ignored by rodeo boards, largely because of tradition and public demand. Other events may appear cruel to unqualified observers, but statistics show instances of injury to livestock are rare.

While Audrey McLaughlin's performance may be viewed as “mixed” (“McLaughlin’s mission,” Canada, Aug. 13), I feel encouraged to read of a leader who is “known to seek a wide range of opinions” and “who deliberately downplays her public position as leader.” As we witness the horrifying events of Oka and Kuwait, can we believe in anything other than McLaughlin’s “consensual style”?

If “Slowdown in luxury land” (Business, Aug. 27) was to generate sympathy for upperincome Canadians, I think you are sadly mistaken. If the purpose was to inform us of the downward trend in the economy, you might have chosen instead to report on the increased number of food banks and homeless citizens in this country, rather than describing how people like Judy Cosman are “tightening their belts” by wearing last year’s designer clothes. 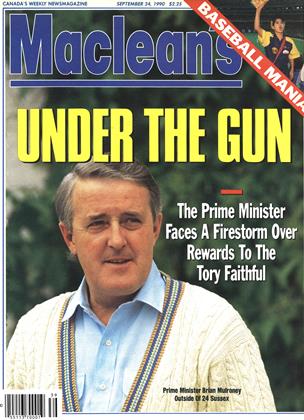