He was considered one of Canada’s best hopes for a gold medal at the 1988 Calgary Winter Olympics, but she was expected to win a third-place bronze. But neither Brian Orser, a native of Penetanguishene, Ont., nor Ottawa’s Elizabeth Manley skated according to pre-Olympic expectations.

Midway through his four-minute program, Orser stepped out of a triple jump a fraction of a second early, a mistake that cost him the top prize and, he says, haunted him every day for the next 18 months. But the effervescent Manley skated almost flawlessly to capture a second-place silver medal. As professionals, Orser, 29, and Manley, 25, have followed different paths. But both have prospered.

Manley says that she has “turned silver into gold,” while Orser told Maclean’s that he has earned $1 million a year since the Calgary Olympics.

Contract: After retiring from amateur competition, Orser joined the Stars on Ice show organized by Cleveland-based International Management Group (IMG), the world’s largest sports marketing and representation company. He also signed several lucrative product endorsement contracts and starred in his own TV special. For her part, Manley is currently completing a three-year contract as guest star of the Hollywood-based Ice Capades, the oldest and largest of the American professional ice-skating shows. She has starred in three TV

specials, one of which was broadcast by the CBC on Dec. 16. As well, Manley has licensed half a dozen products, including skates and a doll, and this fall published her autobiography, Thumbs Up!, ghostwritten by Elva Clairmont Oglanby.

In the book, Manley candidly discusses several personal crises, including her decision to cancel her planned marriage in July, 1990, to Paul Hendrickson, a Minneapolis-based producer of sports and entertainment events. Manley told Maclean ’s that she saw Hendrickson in person only twice in the 12 months before they were to marry, and feared that she would become an “absentee wife.”

Since turning professional, Manley says, she has lived out of suitcases and hotel rooms. She gave up her Ottawa bachelor apartment and now uses the Ice Capades head office in Hollywood as a mailing address. Her three-year Ice

Capades contract calls for more than 250 shows annually, which are crammed into a seven-month season, from September to April.

During the summer months, she skates in ice shows at American theme parks and resort

that she became engaged to Hendrickson.

With both media and fans, she can be remarkably candid about her personal life. During a lunch-hour book-signing in Toronto in November, Manley publicly discussed her parents’ breakup when she was 11 years old, her own nervous breakdown at age 17 and her new relationship with Dean Rutherford, 28, a sports physician and chiropractor who practises in Sun Valley, Idaho.

When her contract with Ice Capades expires,

Manley and her Los Angeles-based agent, Michael Rosenberg, plan to launch their own skating show. It will appear, starting next fall, in theatres with stages measuring at least 12 metres by 24 metres—an area large enough to accommodate a sheet of artificial ice. She says that she also wants to study acting. Said Manley: “I like comedy. I see myself as a Goldie Hawn-type actress.”

Successes: Like Manley, Orser has maintained a hectic pace as a professional. Besides iMG’s Stars on Ice show, which features former national, world or Olympic champions, Orser has also appeared in shows at U.S. theme parks and resort hotels. Said Orser: “I was shocked that there was so much work out there.”

Orser’s amateur successes also led to several lucrative endorsements. He recently completed a three-year contract with the NutraSweet Co. that involved newspaper and magazine advertisements, as well as appearances at company functions. He has also done similar work for the Campbell Soup Co. Ltd. and BMW Canada Inc. For the past six months, Orser has cut back on his performances to spend more time in Toronto, where he now lives. He has also formed his own company, and in October he put on a show, Brian Orser’s Northern Lights, which

As a prosperous professional, Orser says that he is no longer preoccupied with the split-second misstep in Calgary that cost him a gold medal. He added: “Maybe I would have made $2 million

my first year after the Olympics, but who cares? I travel, I skate, I get to do something I love.” For her part, Manley said that her professional career has been equally rewarding. “I’m enjoying what I’m doing,” she said, “but I’m not sitting on a gold mine.” And both skaters said that they will be performing

for several years yet before

they hang up their blades. 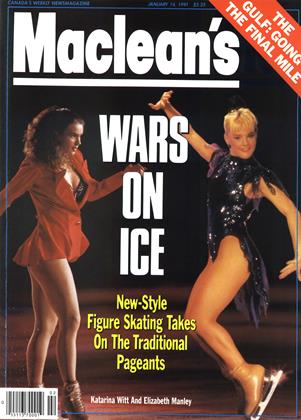