For two days last week, hundreds of thousands of solemn mourners waited for up to 11 hours in a line that stretched for more than four kilometres outside the Palace of Sports arena in the Lithuanian capital of Vilnius. Once inside, they filed through a flag-draped hall and past the open coffins of nine of the 14 victims gunned down or crushed to death under the treads of tanks during the brutal Soviet army assault on the city’s main TV transmitter on Jan. 13. At the republic’s parliament building nearby, thousands of other Lithuanian nationalists maintained nightly vigils. They worked frantically to dig anti-tank ditches and build

barricades around the building, or huddled around bonfires, warming themselves against the wind sweeping in across the Neris River. After hearing reports that Soviet paratroopers were planning to attack the legislature, many people voiced their determination to protect the building that houses their freely elected government. “Lithuania may be small and the Soviet Union powerful,” said Riman tas Morkvenas, a 41-year-old mathematician. “But we will never stop fighting for our freedom.” That could prove to be a futile battle. The powerful central government’s armed forces outnumber the 3.7 million inhabitants of the tiny Baltic republic. More than 80 per cent of

them are ethnic Lithuanians who, polls show, overwhelmingly support the republican government’s March 11 declaration of independence. But that declaration has provoked the Kremlin’s wrath and, last week, Soviet President Mikhail Gorbachev seemed increasingly intent on reining in his fractious empire. Even as Lithuanians mourned their dead, members of the so-called black-beret units of the Soviet interior ministry shot to death a 39-year-old man in Riga, capital of the neighboring Baltic republic of Latvia. The attack followed several army shootings designed, Latvian officials said, to sow panic in the republic.

The Kremlin crackdown in Lithuania prompted a storm of international criticism amid widespread fears that Gorbachev either had decided to reverse five years of democratic reforms—or had lost control of the country to hardline security forces. In either case, said Richard Johnston, a former Ontario MPP who was in Vilnius just before the crackdown as part of a provincial delegation, “we may be seeing a counter-revolution already in progress.”

Canada, the United States, Japan and the European Community all threatened to review their aid programs to the Soviet Union. Prime Minister Brian Mulroney sent Gorbachev a letter condemning the army’s “unwarranted violence.” And on Friday,

President George Bush telephoned Gorbachev and called for a peaceful solution to the Baltic dispute.

But Some congressmen demanded stronger action.

Said Republican Senator Malcolm Wallop: “Gorbachev has shown he is no longer to be trusted.”

Even as Gorbachev secured two new allies in government, however, he faced harsh condemnation from Russian republic leader Boris Yeltsin, Leningrad Mayor Anatoly Sobchek and other liberals for his attempts to preserve the Soviet Union’s crumbling unity through authoritarian measures. But most state-controlled media largely ignored such critics and, in what appeared to be a throwback to a preGorbachev era, devoted most of their coverage

to the Kremlin’s interpretation of events.

According to the official version, published by the Soviet news agency TASS last week, members of the National Salvation Committee, a shadowy pro-Kremlin organization in Vilnius, had called on the army to seize the transmission tower after local television officials refused their request to stop broadcasting antiSoviet invective. The armed forces went to the tower, Soviet officials said, but advanced only after Lithuanians opened fire, killing one officer. The National Salvation Committee, apparently made up of Communists and local Russians who oppose independence, claimed to have assumed power last week.

Only a few publications defied the Kremlin. The independent weekly Moscow News published a statement signed by 30 leading liber-

als, including two of the president’s former economic advisers, calling the army action the “crime of a regime that does not want to leave the stage.” Citing the letter, Gorbachev asked parliament to suspend press freedoms. Deputies objected and passed a watered-down resolution instead, calling for a committee to investigate media objectivity.

The statement in the Moscow News said that Gorbachev had approved of the operation. In fact, Gorbachev has not criticized the military assault, although he denied advance knowledge of the action, saying that local commanders had ordered it. Lithuanian nationalists openly scoffed at that statement. They noted that the Soviet president began sending paratroopers to the Baltics on Jan. 7 to round up draft

evaders, an action that they described as a pretext to force the Baltic republics to abandon their independence drives.

In the wake of the assault on the transmission tower in Vilnius, Lithuanian government spokesmen grimly noted that their oft-repeated predictions had borne bloody fruit: the Soviet crackdown on Lithuania, and provocative army actions in neighboring Latvia and Estonia, had occurred while the world’s attention was focused on the Persian Gulf war. But some Baltic leaders cautiously predicted that there would be no further clashes. They said that the storm of protest raised by the bungled takeover of the television tower may have forestalled an even bloodier attack on the Lithuanian parliament. Latvian Prime Minister Ivars Godmanis declared: “The most dangerous moment has passed.”

But in Vilnius, there was little evidence of such optimism late last week. Outwardly, the city of 570,000 residents appeared calm, with traffic moving through the streets, factories operating and customers lining up outside meagrely supplied state food stores. But black ribbons attached to scores of yellow, green and red Lithuanian flags provided mute evidence of a city in mourning. And defenders of the republic’s legislature continued to channel their grief into action, lining up bulldozers and other construction equipment around a sixfoot-high barricade surrounding parliament.

By midweek, that barricade had become known as Lithuania’s Freedom Wall. It was festooned with symbols of protest against Soviet rule: passports, military medals and cartoons that compared Gorbachev to Adolf Hitler, former Soviet dictator Josef Stalin and Iraqi President Saddam Hussein.

Inside the building, as many as 600 Lithuanians gathered to protect legislators who were meeting in emergency session. Some members of that makeshift defence force, largely composed of draft-age youths, said that they had spent two weeks in the building, alternating guard duty with periods of rest on mattresses strewn across the legislature’s marble floors. They spent hours lounging in plush, highbacked chairs, checking and cleaning a motley array of weapons ranging from hunting rifles to knives and even clubs.

Although many of the young defenders said that they were prepared to resist a Red Army attack, no one claimed that their poorly equipped force would be able to hold out against heavily armed soldiers. “We would fight,” said Romunas Baltakartis, 19, who has refused to comply with the Soviet draft call. “But it would be another massacre.” Baltakartis tucked his principal weapon, a flare gun, into the waistband of his jeans, and added: “It is up

to Gorbachev and the army leaders who control him to decide if they want that.”

At week’s end, military spokesman Maj.Gen. Yuri Nauman dismissed claims that an army attack on the legislature was likely. Said Nauman: “The Supreme Soviet of Lithuania has put up fences and trenches where we have no desire to appear.”

Less than 10 km to the west of parliament,

however, 10 Soviet tanks were still parked around the base of the 790-foot-tall TV tower, their guns pointed towards a chain link fence surrounding it. Outside that fence, a steady stream of residents came to gaze silently through the wire at a Soviet flag protruding from one of the tower’s windows. Many of those visitors left flowers and candles to mark the places where Lithuanian nationalists died.

Among the mourners was Laimonas Tapiñas, one of the last civilians to leave the tower at 3 a.m. on Jan. 13. Tapiñas rejected government allegations that Lithuanians had fired first. Said Tapiñas:

“Independent witnesses, including foreign correspondents, saw what happened, and there was no armed resistance from the Lithuanians.”

After the tragedy, more than 200,000 people attended a Jan. 16 funeral service for nine of the victims at the city’s St. Stanislav Roman Catholic Cathedral. Many of the mourners carried flowers and memorial candles in a calm, hushed tribute broken only by tolling church bells and

sombre hymns. Said Morkvenas: “People from all across Lithuania attended the service— they are quiet cut of respect, but they are also here to show their determination to be free.” At the same time, Gorbachev is under increasingly sharp attack. One of his most powerful critics, Russian leader Yeltsin, reacted to the shootings in Vilnius by flying to Estonia. There, he signed a pact in which Russia and the three Baltic republics pledged still-unspecified mutual support if their sovereignty is threatened. In addition, Yeltsin suggested that the Russian republic may have to form its own security force, and urged Russians in the Soviet army to disobey orders to fire on peaceful civilians. However, state-controlled media carried few reports of Yeltsin’s statements, while devoting extensive coverage to Gorbachev’s criticism of him.

In a rare exception to the news agency’s generally progovernment coverage, TASS political analyst Andrei Orlov warned that a similarly brutal ^ army intervention in the Georgian capital of Tbilisi in April, 1989, fuelled the separatist movement in that southern republic. And Orlov predicted that the bloodshed in Vilnius had brought Gorbachev’s policies of perestroika to the verge of ruin. He added: “Now, it is doubtful that republican leaders will trust President Gorbachev, who exerted great efforts to gather them together.”

Other reformers, citing such incidents as Shevardnadze’s resignation last month, coupled with his warning that dictatorship was imminent, say that Gorbachev is now a prisoner of conservative forces in the Communist party. Said Yuri Afanasiev, a historian and leader of the reformist Democratic Russia movement: “As a politician, Gorbachev has exhausted himself and, from a historical perspective, he has no future.” That judgment is widely accepted in Vilnius and in many other places across the Soviet Union. Whether such dissenters, or the hard-liners in the Kremlin, ultimately prevail may determine whether the world emerges from the Persian Gulf crisis only to face the devastating prospect of civil war and political collapse in the Soviet Union. 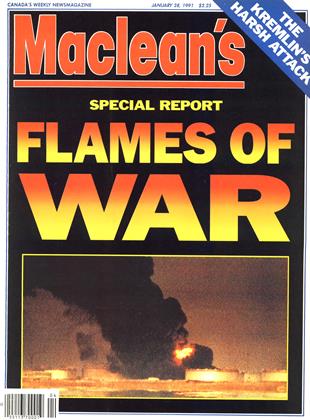