Disorganization, petty bickering, political partisanship and, then, a glimmer of hope—all contributed to the roller-coaster saga of the Conservative government’s troubled unity committee last week. Charged with holding public hearings on the government’s constitutional proposals, the committee ground to a halt after an embarrassingly ill-attended visit to Manitoba from Nov. 4 to Nov. 6. Liberals, New Democrats and the governing Conservatives accused one another of playing political games—at the expense of the constitutional reform process. At the eye of the storm: committee co-chairman and Winnipeg Tory MP Dorothy Dobbie, blamed by the opposition for many of the 30member committee’s problems. The opposition—especially the Liberals—declared that they would boycott the committee if Dobbie remained in place, while Constitutional Affairs Minister Joe Clark stood firm and refused to accept her offer of resignation. But at week’s end, Clark suddenly announced that the differences may soon be reconciled. Said the minister: “I think we may be in a situation where we can get back on track.”

Clark’s optimism found few echoes among other politicians. Declared Liberal MP and committee member André Ouellet: “Frankly, it is a miserable situation.” And in fact, if the committee does survive, it may operate under far different circumstances. Clark proposed last week that it abandon its attempts at town-hall meetings and instead concentrate on meeting with experts and provincial politicians. Continued public input, he said, will be achieved by holding at least five, and perhaps six, constitutional conferences—with subjects determined along the lines of Ottawa’s plan for constitutional renewal. Those conferences would clearly afford individual Canadians less opportunity to speak out on constitutional issues than the original committee approach. But, Clark declared, “People do not want so much themselves to come to a committee—they want to know that the process is open, so that organizations with which they are associated have a right to change the proposals.”

In fact, the implosion of the parliamentary committee and the widespread public disgust with the stalled constitutional issue may mark a swing in Canadian public opinion. Ever since the demise of the Meech Lake accord in June, 1990, Canadians have demanded to be thoroughly canvassed and to have a greater voice in public affairs. The Reform Party of Canada gained legitimacy partly through a platform calling for more referendums and the ability to recall MPs who clashed with their constituents. And the Tories catered to that feeling—and tried to engineer a recovery in public support—by putting the sheen of consultation on their governing style.

But politicians may no longer be able to win popularity through a stated commitment to consult. In October, when International Trade Minister Michael Wilson unveiled a national consultation process on ways to improve Canada’s competitiveness, business and labor leaders heavily criticized him for refusing to take concrete action. And last week, Clark acknowledged that the unity committee’s problems were due, in part, to Canadians’ fatigue with yet more talk.

Said Clark: “I think public attitudes about consultation have changed sharply in the last six months, and we happen to have been caught in the middle of that. Six months ago, everyone was demanding all sorts of consultation. People are now more weary.”

With his proposal to hold a series of constitutional conferences, Clark clearly hopes to regain control over the constitutional change process. As outlined by the minister, the conferences, with the first likely to be convened before Christmas, would be held in different regions of Canada and would likely be co-sponsored by such think-tanks as the C. D. Howe Institute and the Canada West Foundation. Each would deal with a particular constitutional topic. The subjects: what it means to be Canadian and how Quebec fits into the federation; how institutions such as the Senate should be modernized; how to strengthen the economic union; how powers should be divided between the federal and provincial governments; and what sort of self-government should be negotiated for aboriginal groups. And, Clark said, he was open to the idea of convening a sixth—and more generalized—conference on national policy.

Other exercises in consensus building sponsored by various organizations across Canada have yielded positive results. Last June, Maclean ’s assembled a group of 12 Canadians with vastly differing political views to discuss the future of Canada. In the end, after three days of intensive and often emotional discussions overseen by conflict-management specialists, they signed an accord outlining a common vision for a renewed Canada. And last month, the University of Ottawa, Carleton University and Dialogue Canada, a citizens group, sponsored a four-day conference called Towards 2000: A Changing Canada. More than 250 Canadians gathered to discuss their feelings about the Constitution. Said University of Ottawa political science professor John Trent, one of the organizers: “Many of them felt a lack of confidence in talking about some things, but they came knowing what they thought about their country.” In the end, the participants also managed to produce a document outlining the priorities for a revitalized nation.

Clark’s new approach could also be of political benefit to the Tories. By limiting public access, the government may avoid one of the major pitfalls encountered by the unity committee—its hearings were consistently sidetracked by expressions of bald hostility towards the Tories. Noted C. E. S. Franks, a political scientist at Queen’s University in Kingston, Ont.: “The risk in consultation is that you open it up for everybody with a bitch on their minds and all you get is divisive elements, not a consensus.”

Divisiveness, though, was most evident within the unity committee itself as the scent of failure began to waft over its proceedings. The opposition parties, led by the Liberals, turned their sights on Dobbie—and indirectly on Clark. In a move condemned as blatant partisanship by many observers, Liberal Leader Jean Chrétien tied his party’s future participation on the committee to Dobbie’s removal. Last week, even Liberal insiders expressed their dismay at their party’s actions—while many other observers had nothing but criticism for Chrétien’s stand. Said professor Franks: “I see nothing in what the Liberal leadership has said that leads me to believe in their commitment to the process.”

For co-chairman Dobbie, meanwhile, her political baptism by fire has left her shaken. She initially undertook her committee duties in September with an enthusiasm and geniality that became increasingly chilly as the committee encountered a hostile public—and as internal divisions widened and the personal attacks increased. “It is like standing naked on a mountainside and having people throw hot and cold water at you,” she told Maclean’s. And at week’s end, with the committee’s future still in doubt, the political uproar may have tarnished more than one career. 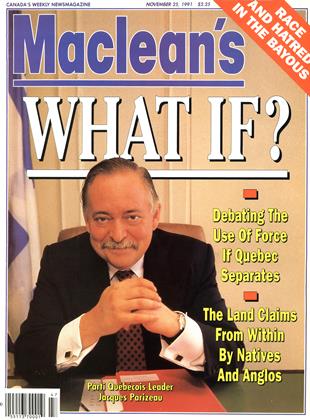