When senior officials of the Liberal party asked the fiery little premier of Newfoundland to consider running for the federal leadership in 1959, Joseph Roberts Smallwood turned it down. “I am king of my own little island, and that’s all I’ve ever wanted to be,” he said. And although he lost the province’s top job to the Conservatives in 1971 after 23 years in power, he remained, symbolically at least, a patriarchal head of state, devoted to the province whose union with the mainland he helped to

engineer in 1949. Last week, Smallwood died in his sleep at his home about 60 km west of St. John’s, one week shy of his 91st birthday, after a recent attack of pneumonia. The body of the man known to most Newfoundlanders simply as “Joey” lay in state in the Newfoundland legislature for two days before a funeral replete with the pomp and circumstance usually associated with deceased heads of state. Declared Premier Clyde Wells, who served in Smallwood’s cabinet in the mid-1960s: “No other person in our long history contributed even a fraction of what he did to the well-being of the people of this province.”

Smallwood’s final years were troubled by declining health and increasing financial problems. But even a stroke and heavy financial losses did not end his dream of completing the five-volume Encyclopedia of Newfoundland and Labrador—the project that consumed

most of his energy after he retired from politics in 1977. When an Ontario firm that was under contract to print the encyclopedia sued the former premier in 1987 for unpaid publishing bills after Smallwood’s publishing company went bankrupt, supporters across Canada organized fund raisers and country singer Tommy Hunter staged a concert to help ease Smallwood’s financial problems. That same year, a charitable foundation, the Joseph R. Smallwood Heritage Foundation, was formed to complete his dream. Last month, the third volume of the

mammoth work appeared in Newfoundland bookstores—while the foundation continues to raise funds for the remaining two volumes. Declared William Rowe, a member of Smallwood’s cabinet and later a leader of the Newfoundland Liberal party: “This encyclopedia, more than almost anything he did, demonstrates his attachment to Newfoundland.”

In fact, those tomes represent Smallwood’s last great plan to benefit and bring recognition to his province. The first, after he became premier in 1949, was his attempt to encourage industrialization of the island. But Smallwood, saddled with what many critics claimed was poor business sense and some questionable advisers, watched as many of the projects— including an orange-juice processing plant near St. John’s—failed. Another part of Smallwood’s industrialization legacy is the 1969 agreement locking Newfoundland into selling

electricity from the power dam at Labrador’s Churchill Falls to Quebec until the year 2041—at a fixed rate that is now roughly onetenth of the market price.

But Smallwood’s years in office also brought many benefits to Canada’s youngest province. Along with the advantages that came with Confederation—such as family allowance and other federal social programs—Smallwood also introduced workers’ compensation and free medical services for children. Declared Stephen Neary, minister of social services under Smallwood: “He pulled Newfoundland into the 20th century.”

Smallwood achieved what he did with relatively little formal education. He was born on Dec. 24,1900, the son of a sawmill operator, in Gambo, 30 km east of Gander, and attained the equivalent of a Grade 10 education. As a young man, he worked as a journalist and developed an interest in socialist politics and labor organizing. A spirited orator, he shifted in 1937 to a successful seven-year stint hosting a radio show, The Barrelman, entertaining listeners with Newfoundland folklore. He left the show abruptly in 1943 to try pig farming, a foray that lasted three years.

Smallwood returned to the British colony’s political scene in 1946 when he was elected as a delegate to Newfoundland’s National Convention on the future of the island. At the time, Smallwood was already convinced that a place in Confederation represented the only solution to Newfoundland’s grim poverty, and he spent the next two years gaining support for his vision. In a 1948 referendum, Newfoundlanders finally endorsed the colony’s entry into Confederation by a slim margin. On March 31, 1949, Newfoundland and Labrador joined Canada, with Smallwood serving as premier. In May, he won the office in Newfoundland’s first provincial election.

Smallwood later acknowledged that “after jfj Confederation, any fool could have become I premier and stayed for some time.” Even so, 5 his electoral record was impressive: he and his I' Liberals handily won the next five elections. After the Liberals’ 1971 electoral loss, Smallwood resigned—but returned in 1974 to mount an unsuccessful leadership challenge to his successor, Edward Roberts. He then formed his own party—the Liberal Reform party—in 1975, but rejoined the Liberals the next year. In 1977, he retired from politics for the last time.

By 1984, he had marketed the first two volumes of his encyclopedia—losing money on both of them. That year, he suffered a stroke that left him unable to speak. Still, his team of researchers continued to work on the massive project, and he was kept informed of their progress. Said Margaret-Ann O’Rourke, the foundation’s director of fund-raising: “He wanted to five long enough to see the encyclopedia completed.” Although that dream eluded him, the publication of the final two instalments of the project, scheduled for 1993 and 1994, will add to the immense legacy that Smallwood leaves on his beloved “poor, bald rock.” 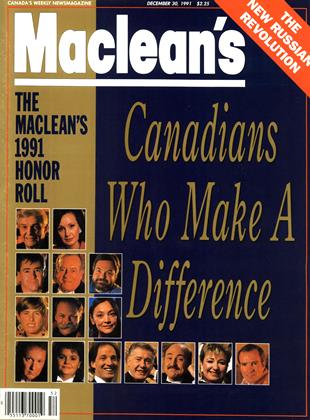