While many Canadians have yet to decide what they want for Christmas, one young woman has already made up her mind: she wants to die. For the past 2½ years, the 24-year-old woman now known publicly only as Nancy B. has suffered from a severe neurological disease that has sapped the strength from her muscles, including those in her lungs. Known as Guillain-Barré syndrome, the condition has left her confined to a hospital bed in Quebec City, paralysed from the neck down and dependent on a mechanical respirator to keep her alive. Although her doctors say that most Guillain-Barré sufferers recover, they have diagnosed Nancy B.’s condition as irreversible. She can speak only in whispers because her throat has been slit to accommodate a tube from the respirator. But late last week, surrounded by lawyers, doctors and family members, Nancy B. told Justice Jacques Dufour of the Quebec Superior Court that she wanted to have the respirator turned off. “I’m fed up with living on a respirator,” Nancy B. told Dufour in the hush of her cramped hospital room. “It’s no longer a life.”

both medical ethics and Canadian law. Ethicists say that Dufour’s decision, which may take him weeks to render, could determine to what extent a patient has the right to refuse treatment. Although Quebec’s Civil Code upholds such a right, Hôtel Dieu hospital officials and Nancy B.’s doctor, Daniele Marceau, denied her request, saying that they could face prosecution under the federal Criminal Code for assisting a suicide or carrying out euthanasia. Marceau also said that if the court grants her patient’s petition, she would suspend treatment even though she regards the act as euthanasia.

Critics of euthanasia express concern that a decision in favor of Nancy B. could set a dangerous precedent. They point out that unlike most patients who opt to refuse lifesupport treatment, Nancy B. is neither terminal nor old. And also unlike other cases, where such treatments as chemotherapy are suspended and where heavily sedated patients may take several days to die, Nancy B. will suffocate minutes after the machine is turned off. “It makes it look like an assisted suicide, and we cannot support that,” said Sabina McLuhan, policy adviser for the Toronto-based Campaign Life Coalition.

But many medical ethicists support a patient’s right to refuse treatment. Rev. George Chapman, chairman of the ethics committee at Calgary General Hospital, said that Nancy B.'s wishes nm contrary to his personal beliefs, but he added: “As long as a patient is capable of understanding his or her condition, then I think that we have to honor the right to refuse treatment.” Dr. Edward Keyserlingk, an associate professor at Montreal’s McGill Centre for Medicine, Ethics and Law, agreed. “The central ethical issue here is that it is not a decision for the doctors, although their opinions are important,” he said. “The choice has to be the patient’s, no matter how much that challenges the values and practices of others.”

Despite the case’s compelling moral and legal issues, several expert observers expressed puzzlement over why the case ever got to court. They say that similar situations that arise in other hospitals are usually settled discreetly among patients, families and doctors, and that the hospitals usually

Because of her request for anonymity, little is known about Nancy B. According to Marceau, she wakes up each morning at about 9 a.m. and nurses bathe and feed her. She spends the rest of the day watching television or listening to the radio. Although she has no movement below her head, she can feel pain and is often racked by discomfort from repeated infections, swelling and aches from a complete lack of mobility, Marceau says. Nancy is single and childless. She has said that she wants to spend one last Christmas with her family. And she has asked her mother to sell her belongings and give the proceeds to charity. “She loved life,” her mother told Dufour in an emotion-charged appeal. “She was someone with character, who always knew what she wanted.”

According to transcripts, Dufour told Nancy B. during the hearing in her hospital room that “it is going to be more difficult to give my decision after having known you.” He said that he had two daughters about Nancy B.’s age, and added that he would be thinking of her during Christmas. Considering the precedents that his decision could set, Dufour will clearly have much to think about.

do not block patients’ requests so long as the patient is considered mentally competent. According to Keyserlingk, that practice is common in cancer wards when terminal patients opt to refuse further chemotherapy. Chapman said that similar cases that have arisen at Calgary General have been resolved without having to go to court. And Nancy B.’s lawyer, Anne Lapointe, said in her closing argument that her client’s request was not for euthanasia. “The stopping of a treatment is not the cause of death,” she argued. “The cause of death is the illness.” 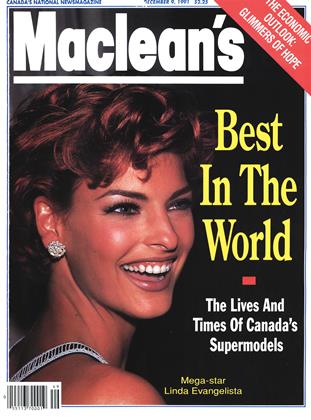