American singer Susanna Hoffs says that going solo is a relief. As one of the Bangles, a popular 1980s allfemale pop group, Hoffs explains that she spent much of her time trying to please the three others. Said Hoffs, 34: "With four singers wanting to be heard, it was a difficult dynamic." B3ut even though she has just released her first solo album, When You're a Boy, her involvement with the group continues. The BBC, concerned about offending Arabs, has banned the group's lighthearted 1986 hit, Walk Like an Egyptian. But, says Hoffs, "It was never political."

War is hell, but for Canadian journalist Arthur Kent, it has had an unusual advantage. NBC's handsome and single Dhahran correspondent, who began his career at CTV, has become a sex symbol. Women have been sending him fan faxes and Telexes. And employees at the NBC affiliate in San Francisco made buttons reading “AKFC” (Arthur Kent Fan Club). At last count, more than 200 had been sold to people across North America. Kent, 37, says that he feels a bit scornful about all the attention. He said: “A lot of correspondents and cameramen are putting their lives on the line.”

Composer Louis Applebaum says that although the immediate future for the arts in Canada looks “rather bleak,” his own seems bright. Next week, at a gala event, Applebaum, 72, will be named Arts Person of the Year by Toronto’s Jewish community. Applebaum, who has received many honors for his work, which includes countless movie, stage and TV scores, said that he is honored. “This is the first time I have been the focus of a whole evening, ” he added. But the co-author of the 1982 Applebaum-Hébert federal report on the arts expressed dismay about their current state in Canada and about recent CBC budget cuts. Said Applebaum: “We aimed to make the CBC bigger and better, not smaller and weaker. It’s gone in exactly the wrong direction. ”

THE APPLE OF HER FATHER’S EYE

Victoria Brynner, daughter of actor Yul Brynner, who died in 1985, says that he influenced her to pursue a career in photography. Added Brynner, 28: "He thought I had talent and gave me my first camera. When I was 14, I shot what was around me, like the view from my room, the dog on the farm next door." Now, she is photographing famous people. Her subjects include Elizabeth Taylor and former Pakistani prime minister Benazir Bhutto. Said Brynner: "My father was a great photographer with very specific ideas."

Because he was in “so many bad movies in the 1970s,” says Irish actor Richard Harris, he avoided the big screen for 10 years. But he has made a triumphant return in The Field. Made by the Irish team that created the 1989 Academy Award-winning movie My Left Foot, The Field features Harris as Bull McCabe, a Lear-like Irishman who fights to keep the rented land that he has tended for most of his life. Already, many critics predict that Harris will win a best-actor Oscar. The movie, says Harris, uses “the emotions of ordinary people who represent gigantic issues.” He added: “The same issues are at stake in Israel, Northern Ireland and Kuwait. We can all identify with land that is taken away.” Harris, 60, added that he identified so strongly with the intense character of McCabe that “I grew a beard before I knew I had the role.” Declared Harris: “To me, the Bull was everything, a fearless man who, in classic, tragic terms, had a dark secret—one that would destroy him.”

Harris: a strong identity with land taken away 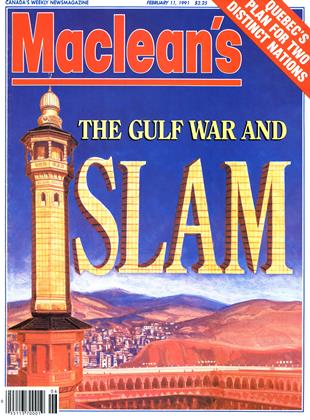