Slouched in a blue leather chair in his Toronto office, Sidney Oland makes little effort to conceal his annoyance. As president and chief executive officer of John Labatt Ltd., Oland has had his hands full recently trying to streamline the operations of one of Canada’s most diversified consumer-products companies, a sprawling $3billion conglomerate best known for its interests in brewing, but with additional holdings in food processing, professional sports, entertainment and broadcasting. That alone is a daunting challenge, but now Oland has to deal with another problem. For months, Bay Street has been rife with speculation that Labatt will soon be sold to a foreign bidder. Although Oland dismisses the rumors as unfounded, the 50-year-old Nova Scotia native says that the talk of a takeover has damaged the company’s relations with its 16,500 employees and im-

paired its efforts to expand overseas. “It’s a case of investment bankers trying to stir up some business for themselves,” says Oland. “It’s a very aggravating situation.”

Despite Oland’s protestations, the rumors

about an impending takeover of Labatt are almost certain to persist. The speculation is largely due to the beleaguered state of the company’s major shareholder, Toronto-based Brascan Ltd. A holding company in Peter and Edward Bronfman’s corporate empire, Brascan owns 41 per cent of Labatt, a stake that at current market prices is worth at least $1.8 billion. According to many analysts, Brascan is under increasing pressure to sell its Labatt investment to raise money for one or more of the Bronfmans’ other companies, including Royal Trustco Ltd. and Noranda Inc. Those firms have been hard-hit by the current economic downturn and need cash infusions. Said Steven Kressler, a financial services analyst with the Toronto-based investment firm Midland Walwyn Inc.: “Reinvesting the proceeds of a Labatt sale would be very helpful to Brascan.”

At the same time, some investors say that

Labatt badly needs a strong foreign partner in order to survive in the increasingly competitive global beer market. Among Canadian brewers, the company, with a 42-per-cent share of the domestic market, is second only to the Molson Cos. Ltd., with 52 per cent of the market. But Canadians are drinking less beer, an average of 80 litres per person in 1989, down from 86 litres in 1981. Moreover, both Molson and Labatt are almost certain to lose market share in the future as Canadians increase their consumption of imported beers. Canada is currently negotiating with the European Community in order to allow foreign brewers greater access to the domestic market. Says Jacques Kavafian, a consumer-products analyst with the investment firm McNeil Mantha Inc. in Montreal: “Without a beer acquisition in foreign markets, Labatt’s situation is hopeless.”

Labatt tried three times last year to acquire a foreign brewer, but on each occasion it was unsuccessful. In the most recent attempt, last summer Labatt launched a takeover bid for La Cruz del Campo SA, a Spanish brewery that has 22 per cent of the beer market in that country, one of the few where per capita beer consumption is increasing. La Cruz del Campo was eventually sold to London-based Guinness PLC for $1.15 billion, a price that Oland says was too steep for him.

Labatt’s non-beer operations are also experiencing problems. For years, the company’s managers tried to increase earnings by diversifying into other segments of the North American consumer-products market. The company’s assets now include Sealtest milk, Lactantia butter, Five Roses flour and Everfresh fruit juices, as well as the cable television sports channel TSN and a 45-percent share of the Toronto Blue Jays baseball club.

At first, many analysts said that Labatt’s diversification drive was sound. But recently, some critics have contended that the company lacks focus and is failing to generate sufficient profits. In the most recent three-month period, which ended Oct. 31, profits were $36 million on sales of $1.4 billion. That compared with earnings of $40 million on sales of $1.3 billion in the same quarter a year earlier. Declared Kavafian: “Brascan has always bragged about obtaining a 15-per-cent return from its investments. Labatt has not delivered over the past five years, and the outlook for the next five years is bleak.”

Oland himself appears determined to correct that situation. In 1989, when he moved from the head of Labatt’s brewing division to the helm of its parent company, he announced plans to refocus the sprawling corporation and terminate its diversification binge. In rapid

succession, the new president sold ChâteauGai Wines and Catelli Inc., closed two moneylosing U.S. dairies and shifted the company’s U.S. food operations from brand-name products to the wholesale food supply sector. Michael Palmer, research director at Sanwa McCarthy Securities Ltd. of Toronto, for one, says that Oland deserves credit for trying to improve Labatt’s performance. “The investment community would like to see more restructuring,” Palmer adds. “But at least the company is more realistic about its assets than it was. They’ve awakened to reality.”

For his part, Oland says that further streamlining efforts will likely be necessary. “I’m not sure that we are sufficiently single-minded and focused enough,” he adds. “There is still a debate internally about how many legs it is appropriate for the company to have. It’s not good to be too diffuse.”

Some analysts say that is also the case with Labatt’s controlling shareholder. The interests of Brascan and its affiliated companies within the Bronfman family’s Edper group are concentrated in the natural resources, real estate and financial services sectors. According to some outsiders, it would make more sense for Labatt to be owned by a parent company that has experience in the same business mix.

If Labatt is unable to buy a foreign brewery and does find itself owned by a competitor, the favored new owner is Anheuser-Busch Cos. Inc. of St. Louis, brewers of Budweiser beer. Labatt already has a licensing agreement with Anheuser-Busch that permits it to brew and sell Budweiser beer in Canada. And Anheuser-Busch, like Labatt, has experience in the entertainment and food12 processing industries. Other o possible suitors include Allied Lyons PLC of London, which brews and distributes Labatt 2 products in the United Kingg dom, Philip Morris Cos. Inc. ° of New York City and Suntory Ltd. of japan.

Brascan itself is maintaining a stony silence about the fate of Labatt. But few analysts seem to doubt that it would be in Brascan’s own interests to sell the 143-year-old brewing company. “A corporation has to be a good seller as well as a good buyer,” says Philip Wright, an analyst with McNeil Mantha’s Vancouver office. According to Wright, many investors now shun stocks in the Bronfman family orbit partly because they question Brascan’s willingness to rid itself of assets that fail to meet the group’s long-term strategy. He adds: “This is Brascan’s chance to show that it can actually sell a company.” Oland may not like that kind of talk, but for now the speculation about Labatt’s future shows no sign of letting up. 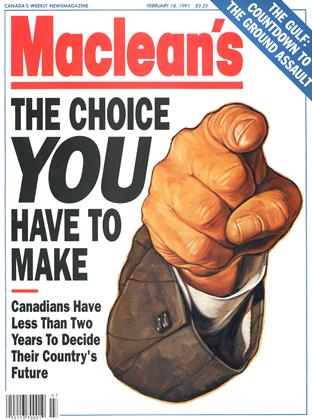