Although personal computers have become everyday tools in many workplaces and homes, some potential users still avoid learning how to use the high-tech keyboards. Now, GO Corp., a software firm based in Foster City, Calif., has unveiled the prototype of a revolutionary new computer operating system called PenPoint, which uses a pen instead of a keyboard. Even though computers using the new technology will not be on the market until late this year, industry analysts say that PenPoint and similar systems that other firms are developing could make computers available to millions of people who do not currently use them. Indeed, some experts predict that the market for so-called note-pad computers could be worth as much as $3 billion by 1995.

For those who are uncomfortable with existing computer technology, note-pad computers will offer a system that is no more complicated than putting pen to paper or, in the case of the PenPoint, a screen. So far, the GO prototype model can read only printed words, and industry experts said that the development of handwriting recognition is still several years away. But other functions, including calling up electronic files from computer directories, can be

accomplished with a tap of the pen on the screen, and the user only has to draw a cross through a word to erase it. Still, a note-pad computer using PenPoint, which will weigh about four pounds and look like a thick clipboard, has one feature that could deter some would-be owners: an initial expected price tag of about $6,000.

Industry experts say that the cost will probably come down quickly as the new technology spreads through the computer market. When GO officials unveiled the PenPoint system at a San Francisco hotel on Jan. 22, more than 800 people, including representatives of 40 computer hardware and software manufacturers that have agreements with GO, attended the event. Among the firms that have agreements with GO allowing them to manufacture products based on the PenPoint technology are International Business Machines (ffiM) of Armonk, N.Y., and Dayton, Ohio-based NCR Corp.

What makes a pen-based computer so simple to use—its small size, its portability and its ability to read words and symbols that a user writes on its screen—is paradoxically what made it difficult to develop. GO is just one of scores of firms around the world that have been racing to perfect a system based on an optical

scanning system that can translate written signals into computer language. Robert Carr, Go’s vice-president of software development, told Maclean ’s that his company’s aim is to dominate the market for note-pad computers. Industry analysts said that if GO’S PenPoint system is successful in the marketplace, the firm would take an early market lead over Redmond, Wash.-based Microsoft Corp., which is working on a similar penbased computer system called Pen Window. Microsoft’s system is not expected to be on the market until the middle of 1992.

Indeed, some experts say that Go’s PenPoint machine could herald a transformation of the market for personal computers. Although the products of different manufacturers will vary, note-pad computers will eventually be smaller and more powerful than the current generation of laptop 1 computers. Norman Francis, presiI dent of North Vancouver, B.C.-based | PenMagic Software Inc., which is de° signing software for the PenPoint system, predicted that the first note pads will have at least five times the random-access memory of the average personal computer now in use.

Already, computer firms are searching for ways to package the new technology. Dean Kline, a spokesman for IBM, the world’s largest computer manufacturer, said that his firm signed a licensing agreement with GO in July, 1990, and launched pilot projects using PenPoint prototypes with some of its larger customers, including Illinois-based State Farm Mutual Automobile Insurance Co., to find out how the PenPoint technology could be used in businesses. Norman Vincent, the insurer’s vice-president of data processing, said that his company is looking into the development of software that would allow adjusters using note pads to assess vehicle damage, tabulate repair and replacement costs, and even issue on-thespot cheques to its customers.

Despite forecasts by some PenPoint enthusiasts that note pads will sweep desktop models out of the personal computer market, most analysts say that note pads will work in conjunction with desktop computers rather than replace them. As well, Paul Renaud, chief architect for SHL Systemhouse, an Ottawabased computer systems integrator, said that it would be several years before software can be designed for all the note-pad applications that are possible. For his part, State Farm’s Vincent said that some insurance adjusters who took part in the PenPoint pilot project found the prototypes too heavy and said that the machine sometimes had difficulty deciphering their printing. Despite that, Vincent said that notepad computers are “the most exciting thing I have seen in the 20 years I have been on this job.” That excitement is likely to spread if the new PenPoint-based machines succeed in winning over millions of converts to computer use. 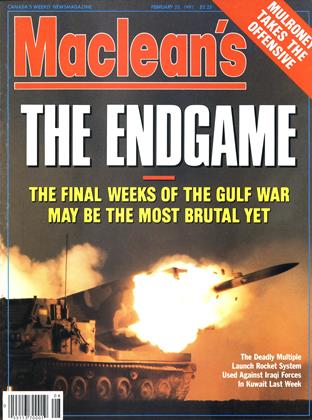