In a Gulf land war, U.S.-led combat troops in Saudi Arabia confronting Iraqi positions in Kuwait would likely face heavy artillery fire from designed-in-Canada Iraqi howitzers. According to several independent military analysts, the Iraqis acquired the potent weapons from South African and Austrian companies. But they were designed in Canada during the early 1970s by Canadian ballistics expert Gerald Bull, who was shot to death outside his Brussels apartment last March by unknown assailants. Military analysts contend that Iraqi howitzers based on Bull’s GC-45 (the initials stand for Gun Canadian) have far greater range and accuracy than similar weapons in the arsenal of the coalition forces.

Predicted Brian MacDonald, a Toronto-based management consultant and former Canadian Forces reserve officer: “The Canadian gun is going to cause a lot of grief to the allied forces.”

The powerful howitzer, which fires 155-mm shells containing 95 lb. of explosives, is just one weapon in the vast and lethal arsenals of the Iraqis and the opposing coalition of land and seaborne soldiers and marines, the bulk of them American. Most analysts predict that during a land battle, both sides will employ centuries-old tactics, along with thousands of tanks, guns and aircraft—and some of the most advanced, computer-aided weaponry available. Both American and British land forces rely heavily on new battle tanks, some of them capable of travelling at speeds up to 65 km/h and equipped with computer-guided firing systems. U.S. combat helicopters, including the formidable AH-64 Apache, which can fire laserguided antitank missiles, would support the ground troops. Some of the invasion forces also possess night-vision devices that permit helicopter pilots, tank operators and foot soldiers to detect and fire on their enemies in the dark. The 31-nation coalition has a total of about 675,000 men and women in the Persian Gulf, but only about 490,000 of them are ground combat troops. The remainder are naval, air force and support personnel.

Despite the impressive array of weaponry, some military experts said that the coalition forces’ technical superiority may provide only a marginal advantage over the Iraqis. They said that sand could clog the engines of tanks on

both sides of the war, and sand dust could reduce the effectiveness of computer and laser-guided weapons. The opposite problem— winter mud—has already impeded coalition tanks and other vehicles trying to move towards the Kuwait border. As well, coalition ground forces lack the 3-to-l advantage that is often said to be necessary to overcome dug-in defenders. To offset that disadvantage, many analysts contend, the success of an allied land assault depends on the effectiveness of the current daily bombing of Iraqi positions inside Kuwait. If the bombing fails to inflict serious damage to Iraqi equipment and morale, the coalition forces could face a long, gruelling war—with high casualties.

According to most observers, the initial skirmishes in the land battle would likely involve artillery duels, and the Iraqis may have an advantage because of their Canadian-designed weaponry. MacDonald said that the Iraqis will probably rely on artillery fire to harass coalition ground forces. John Thompson, managing director of the Toronto-based Mackenzie Institute, a nonprofit research organization that studies regional conflict, said that while some Iraqi howitzers can hurl shells up to 25 miles, similar allied weapons have a maximum range of only 15 miles.

Howitzers: Independent military analysts argue that the Iraqis possess the best artillery in the world. They also maintain that this weaponry should have been developed for the Canadian Forces. Washington-based Maclean ’s Contributing Editor William Lowther, whose biography of Bull, Arms and the Man, will be published this spring by Doubleday Canada Ltd., said that Bull designed an improved artillery shell and gun at his plant in Highwater, Que., during the 1970s. He was charged with illegally selling the technology to the South African government and convicted in 1980 under the U.S. Munitions Control Act. After spending four months in a U.S. penitentiary, he moved to Belgium. From there, Bull sold another version of the gun to an Austrian manufacturer, Lowther said. Both the Austrians and the South Africans sold the howitzers to Iraq. Added Lowther: “Before Bull showed the designs for his gun to anyone, he went to Ottawa. But nobody was interested.”

The coalition forces can respond to Iraqi artillery fire with potent weapons systems of their own. The Mackenzie Institute’s Thompson said that the Iraqis will reveal the position of their artillery the moment they fire. The coalition forces can then send in attack aircraft to hit Iraqi positions from the air. They also can respond with British or American multiplelaunch rocket systems (MLRS), which have not been used in combat before. The MLRS is

transported on a tracked vehicle and fired from the ground. Martin Shadwick, a research associate with the Toronto-based Centre for International and Strategic Studies, said that in 60 seconds, the MLRS can fire 12 rockets, each of them carrying a 220-lb. explosive warhead.

Shadwick said that during a land battle, close support aircraft may drop deadly cluster bombs on enemy artillery battalions. He said that the 12 rockets from an MLRS can be loaded with

cluster bombs containing 8,000 explosive elements, each the size of a hand grenade. Shadwick added that a dozen rockets can saturate an area the size of six football fields with projectiles capable of piercing light armor. Said Shadwick: “It’s a pretty nasty little device. Troops caught in the open would be in big trouble.” The coalition will also be relying on close air support to reinforce its ground forces. American Cobra and Apache attack helicopters can

be used in a number of tactical roles, including attacks on Iraqi tanks and armored vehicles. The Apaches, which are untested in combat, come equipped with weapons systems that include laser-guided Hellfire missiles. Explaining the Hellfire’s operation, Thompson said that when a laser beam strikes a metal object, such as a tank or armored vehicle, a reflection bounces back. When the pilot fires a missile, its guidance system directs it along the reflected beam to the target, all within seconds.

Another key weapon in the coalition armory is the A-10A Thunderbolt aircraft, which is designed as a tank destroyer. Nicknamed the “Warthog,” the A-10A is equipped with guided missiles and a powerful Gatling gun—a sevenbarrelled revolving cannon capable of firing 70 rounds of armor-piercing bullets a second.

Although the allies claim to have established air superiority, some military analysts warned that the coalition forces may not be able to strike at will. Combat helicopters and such aircraft as the Warthog are most effective at low altitudes, which will put them within striking distance of Iraqi anti-aircraft guns and missiles. Jane’s Soviet Intelligence Review, an authoritative British publication, published a special issue on Iraq last October and concluded: “Iraq is well equipped with air-defence systems, mostly of Soviet origin. Some have been improved by the Iraqis themselves.”

Combat: The closing stages of a land campaign would likely involve a tank duel. The Iraqis have a fleet of 4,100 battle tanks, while the coalition forces have just under 3,400. Most analysts say that the best Iraqi and allied tanks possess roughly equal capabilities. The most up-to-date Iraqi tank is the Soviet-built T-72, a speedy (80 km/h), well-armored vehicle with a 125-mm gun capable of firing a relatively rapid eight rounds a minute. The Iraqi army has about 500 T-72s. Military experts estimate that roughly half of Iraq’s tank force consists of Soviet-built T-55 tanks, which are based on a 40-year-old design, according to Jane’s. The Iraqis have added newer, larger guns and upgraded the tanks’ armor.

The U.S. army rates its M1A1 Abrams tank the most powerful in the world, but it has no combat experience. The turbine-powered Abrams, which travels at speeds of up to 65 km/h, has a 120-mm gun that can fire six rounds per minute. The 30-lb. projectiles have a dart-shaped nose designed to pierce tank armor and shower the interior with pieces of molten metal. Most of the coalition forces’ tanks are equipped with low-level-light television cameras that enable crews to see their enemies at night. They also have imaging devices that can detect an enemy tank’s position based on the heat it produces. Those devices should allow the allied tanks to operate effectively against hidden targets, or to seek out Iraqi tanks at night. Still, many analysts warn that the coalition troops and their hightech weapons face entrenched enemy forces— and, beyond them, Iraq’s elite Republican Guard. 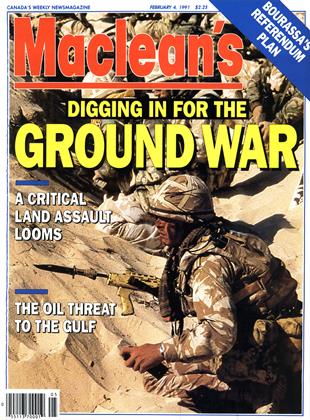