James Metcalfe left his office in Markham, Ont., in good spirits last July 26. After 25 years spent cultivating business contacts throughout the Middle East, his engineering consulting firm, Cansult Group Ltd., had just won a contract to participate in a $ 150million modernization of the Ardiya sewage treatment plant in Kuwait City. But on Aug. 2, Saddam Hussein’s tanks rolled into Kuwait, and although the contract arrived in the mail at Cansult’s headquarters a few days later, the project clearly had become another victim of Hussein’s invasion. Last week, however, Metcalfe said that Kuwaiti officials told him that the Ardiya project will proceed as planned. He added that he hopes to win new contracts now that the international effort to rebuild Kuwait, estimated to cost as much as $115 billion, is under way. “For a long time, even our Kuwaiti contacts had no idea what was going on,” said Metcalfe. “But now, we are ready to go back into the country. There may even be some new business ahead.”

The race to cash in on the massive reconstruction effort intensified last week after U.S.led forces pushed the Iraqi army out of Kuwait. Analysts predicted that U.S.-based companies will be rewarded with the lion’s share of the postwar contracts, with British and German firms also doing well. Meanwhile, several Canadian firms are also in the bidding, but experts say that they face substantial obstacles. For one thing, there is little history of trade between the two nations—Canada’s exports to Kuwait totalled just $20.7 million in 1989, mostly lumber and auto parts, while imports were worth $783,000, mostly electronic equipment. As well, the inherent difficulties in establishing contacts in the region are likely to be compounded in the postwar period. Said Metcalfe: “All of a sudden, everyone is on the bandwagon. But it is a tough market even under more peaceful conditions. It’s not a place where you can expect to hit and run.”

Damage: Even before the war ended, U.S.based contractors had already secured their places at the front of the rebuilding line. Within weeks of the Iraqi invasion, the exiled Kuwaiti government opened an office in Washington to co-ordinate recovery efforts. By Jan. 29, it had awarded U.S.-based firms reconstruction con-

tracts worth a total of $802 million. Among those is a $52-million contract to the U.S. Army Corps of Engineers to assess war damage and supervise the rebuilding effort during the first three months after the war. As well, several huge U.S.-based engineering firms, including San Francisco-based Bechtel Group Inc., have already received large reconstruction contracts.

The Kuwaitis’ first priority appears to be restoring public services and utilities destroyed by the Iraqis. Already, Peoria, 111.based Caterpillar Inc. has sold the Kuwaitis diesel engines that can be used to supply emergency electrical power, while Schaumburg, Ill.-based Motorola Inc. is shipping the Kuwaitis thousands of portable telephones. Maintaining order also appears to be a priority. Among other items, the Kuwaiti government has ordered more than $70 million worth of arms and equipment for police, including helmets, riot sticks, prison buses and handcuffs.

As well as repairing broken telephone lines, roads and water pipes, the Kuwaitis are also

attempting to restore their nation’s economic lifeline: crude-oil production. Last week, Calgary-based Safety Boss Ltd. said that it had been retained to help extinguish the hundreds of oilwell fires in the Gulf state. Another Calgary firm, Dreco Energy Services, won a $ 17million order to supply two mobile oil-drilling rigs, specially designed for use in the desert. They will be among the first replacements for the 14 drilling rigs that the Kuwaiti government claims were dismantled and shipped to Iraq by occupying troops.

million for a temporary air traffic control tower in Kuwait. Said Firan vice-president David Mills: “We look at this as the first of other orders to go into that area.”

Several Canadian firms also are trying to land contracts to participate in longer-term environmental and industrial projects. Agra Industries Ltd. of Saskatoon, for one, has registered both with the Kuwaiti Emergency Recovery Program in Washington and with the U.S. Army Corps of Engineers as a potential consultant on oil-spill cleanups. The engineering and construction firm is also touting its ability to reconstruct harbors, pipelines and storage silos. Said Agra group vice-president William Pearson: “It’s not an orderly process, but we’ve had operations in Kuwait before and familiarity helps enormously.” Given the huge resources of their U.S. competitors, however, many Canadian companies may discover that familiarity with the customer is not enough. 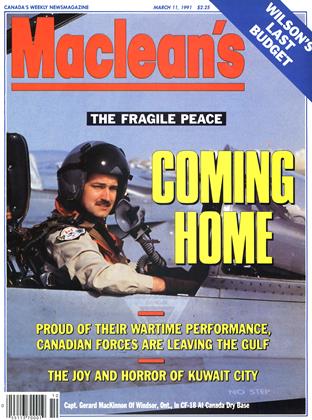