A bid for control of the Daily News

Ever since the 1919 launch of the New York Daily News, the headlines in America’s oldest tabloid have reflected the gut-level pulse of the robust city. When then-President Gerald Ford refused to give financial aid to the city during the 1970s, the paper’s banner headline shouted, “FORD TO CITY: DROP DEAD.” And last week, as U.S. soldiers started to return from the Persian Gulf, it roared: “HERE COME THE HEROES.” The paper’s body-blow journalism proved highly successful, and it maintained a daily circulation of more than one million for decades. Then, during the 1980s, the paper suffered from rabid competition on the outside and militant unions on the inside. Now, after 19 weeks of a violence-ridden strike, its circulation has slid to as low as 200,000, according to some estimates. But last week, almost on the eve of a final deadline to close down the historic paper, British press magnate Robert Maxwell, a man as colorful and brash as the Daily News is aggressive, was negotiating a deal to buy the paper. Said Maxwell: “New York without the News would be a great loss—to New York, the United States and the world.”

The proposal to purchase the storied newspaper from the Tribune Co. of Chicago followed a strategy that Maxwell has used to buy a number of financially troubled newspapers,

including London’s flashy tabloid the Daily Mirror. For the deal to close, nine labor unions, representing nearly 2,500 Daily News employees, were expected to agree to let the paper lay off 800 of its employees and to accept technological change. And they had to come to a decision by March 11. In return, Maxwell indicated that he would fire all replacement workers who were brought in during the strike and drop all lawsuits that the Daily News has brought against its unions. For his part, George McDonald, president of the Allied Printing Trades Council, the umbrella group of the striking unions, said: “Any offer we get will be better than what we’ve got now with the Daily News management.”

The purchase of the Daily News would stand as an important personal achievement for Maxwell, 67, who is one of nine children bom to a Czechoslovakian farm family and who has just three years of formal education. Since 1988, he has poured billions of dollars into North America in his drive to build a diversified media empire rivalling that of his arch-adversary, Australian-born Rupert Murdoch, the aggressive Oxford-educated press baron. After 11 consecutive years of losses, Murdoch sold the rival New York Post in 1988, leaving Maxwell to succeed where his rival failed. Meanwhile, at least some of the Daily News’s editorial staff

Maxwell seemed an ideal match for the Daily News, a paper that was once as brash and successful as he is. The tabloid’s original owner, Joseph Medill Patterson, launched it 72 years ago as The Illustrated Daily News. He aimed it at the thousands of working-class immigrants who had been streaming into New York City from around the world. Over the years, the morning paper developed a faithful readership with a combination of top columá nists, including Jimmy Bresg lin, and a visceral, stripped1 down version of the previous o day’s events. It had the best u lineup of reporters and columnists covering local stories in the city. In fact, almost a third of the staff at the highly regarded New York Times began their careers at the Daily News.

The Daily News's pioneering use of dramatic writing, sensational photographs and pungent headlines pushed the paper’s daily circulation to 1.3 million in 1929, and its Sunday circulation peaked at 4.7 million in 1947. Although its circulation did not increase with the population of New York, it held steady at more than one million—it was the United States’ largest-circulation metropolitan daily—until last Oct. 25, when the strike began. Said Everett Dennis, director of the Gannett Center for Media Studies at Columbia University in New York: “It appealed to people who wanted human interest and pictures.”

The Daily News continued its hold over New York readers until the 1970s, when the face of the sprawling city slowly changed and television came into its own as a major threat to newspapers, especially tabloids. Said Dennis: “Local television news in New York is clearly the tabloids of the present day. It is highly sensational, with a lot of morbid curiosity.” While television took its toll, the paper also suffered because it counted on newsstand sales, something that decreased as its traditional blue-collar audience followed heavy industry out of the inner city and subscribed to suburban papers instead.

As the Daily News battled to gain circulation in its hotly contested market, management said that it was crippled by high labor costs— particularly those associated with its overstaffed and antiquated printing plants. The unions had grown so powerful that they have a say in maintaining staff levels—even though the jobs may no longer be required. Over the past 19 weeks, the paper’s owners failed to force the union to accept cuts of more than 50 per cent, much of the dispute being focused on guarantees of paid overtime. Said Daily News publisher James Hoge: “Management does not

even have the basic right to hire, supervise or determine how work gets done. It’s a nightmare.”

According to company officials, the unions countered proposals to cut costs with demands for improved working conditions, job security and higher pay.

Then, shortly after midnight last Oct. 25, 34 truck drivers walked off the job after an incident between an employee and a supervisor. And when a bus that was carrying non-union replacement workers rolled up shortly afterwards, about 200 Daily News employees threw rocks at it and strikers vandalized 40 delivery trucks.

During the strike, members of the Daily News management continued to publish a scaled-down version of the

paper. At one point, the paper’s editors ran stories about “roving wolf packs” of strikers chasing down delivery trucks. But with circulation down to about 200,000 and advertising rates down accordingly, the paper was losing nearly $850,000 a day. As a result, its owners said that if they could not find a buyer by March 15, they would shut it down—and Maxwell later gave the union only until March 11 to decide.

Despite the size of Maxwell’s media empire, which has assets of more than $2 billion and includes the giant U.S. book publisher Macmillan Inc. and P. F. Collier Inc., he may be in for the fight of his career in New York, which is

already served by two other financially troubled tabloids. Indeed, the New York Post, with a daily circulation of 700,000, was close to bankruptcy last year, and only drastic staff and salary cuts kept it alive. And the third tabloid, New York Newsday, with a daily circulation of 340,000, is massively subsidized by its parent company, the Times Mirror Co. of Los Ange-

In fact, some analysts say that the Daily News is in such critical financial shape that the Tribune Co. may have to pay Maxwell as much as $70 million just to take the paper off its hands. But by doing so, it would have to pay massive wage and benefit settlements to its workers if the paper is shut down. Union adviser Theodore Kheel said that if the cutbacks take place, the savings for a new owner would be about $90 million in labor costs a year. And union president McDonald said that de1 spite the proposed cuts, Max> well is offering a better 1 proposal than the Chicago " group did because he is ap-

Just how Maxwell would change the content of the Daily News to regain its lost circulation and overtake the Post was a subject of debate in journalistic circles late last week. But some members of the editorial staff said that he would not try to win back the paper’s audience by filling its pages with scantily clad women and grisly crime stories. They speculated that Maxwell would, in fact, recast the Daily News as a paper of substance. By doing so, he could carve out a place in New York society as the publisher of a quality newspaper. That is a status he has been unable to achieve in London, where he is viewed as an outsider and is known as the “bouncing Czech.”

Last year, Maxwell tried to dissociate himself from his brash Fleet Street papers by launching The European, an internationally sold broadsheet with lavish four-color photography. The English-language daily is aimed at affluent readers, and Dennis said that Maxwell could take a similar approach with the Daily News. But even if he did, the paper would likely remain in tabloid form and would stay true to the Daily News’s long tradition of aggressive reporting and writing.

As well, Maxwell may be trying to prove that he can thrive in the tough New York dailynewspaper sector where Murdoch failed. And although the Post’s circulation has risen by 50 per cent as a result of the strike at the Daily News, many analysts speculate that if Maxwell turns his latest acquisition around and regains his lost circulation, the daily Post could be forced out of business. Said Kendrick Noble, a media consultant in Bronxville, N.Y.: “Mr. Maxwell seems to think he has a chance to prove that he can outdo Mr. Murdoch here.” Indeed, when the final story is written on Maxwell’s latest deal, it will have as much to do with personal conquest as saving a legendary newspaper. 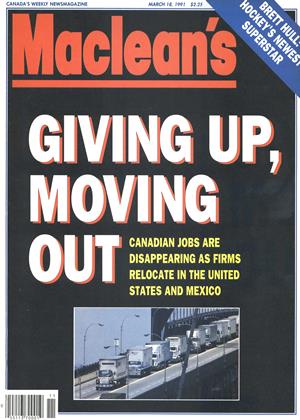