AFTER THE INVASION MARY NEMETH March 4 1991

His accomplishment is one that has evaded all other modern Arab leaders. For more than a month, his forces have withstood a devastating aerial bombardment. He also defied Western opinion to fire missiles at the Arab world’s archenemy, Israel. For that, militant Moslems from Casablanca to Amman have hailed him as a hero. But at the same time, Iraqi President Saddam Hussein has shattered the elusive dream of Arab unity and radically overturned the delicate balance of power in the Middle East.

Brutal: On Nov. 29, United Nations Security Council Resolution 678 authorized the use of force to evict Iraq from Kuwait and then to “restore international peace and security in the region.” Driving Hussein’s forces back to within their own borders involved a deadly ground campaign that began on the weekend, complementing the massive air and naval bombardments that were already under way. But the

restoration of peace in the area may be the most formidable task of all. Said Bruce Jentleson, director of the University of California at Davis’s Washington Center: “I don’t think that anyone should have any illusions that the end of this war will guarantee peace.”

Some Western analysts and politicians say that after the allies drive Hussein from Kuwait, he may still remain in power and keep some of his military intact. As a result, he might yet re-emerge to wreak revenge on the neighboring states that were allied against him. Said U.S. House Speaker Thomas Foley last week: “If you allow Saddam Hussein to restore his military power, there will be a serious problem in the Gulf for years to come.” But other experts said that if the ground attack obliterates the Iraqi military, the situation could be even more dangerous because it would create a power vacuum that powerful neighboring states, especially Iran

and Syria, may seek to fill. Meanwhile, the analysts added, the relentless bombing of Iraq may inflame anti-Western sentiments among many Arabs—and could even lead to the overthrow of proWestern governments, including that of Egyptian President Hosni Mubarak.

Most analysts agree, however, that the United States and its allies have to try to establish a comprehensive regional security arrangement in the Middle East. Said Bernard Wood, director of the Ottawa-based Canadian Institute for International Peace and Security: “There ÿ has been a tremendous shak-

1 ing-up of the whole region. A 8 new order has to be put into S place after it’s all over.” A £ new alignment will have to J include Iran, address eco-

3 raeli-Palestinian conflict. Failing that, said James Bill, director of the Reves Center for International Studies at the College of William and Mary in Williamsburg, Va., “We are just asking for trouble down the road in the Gulf.”

Influence: In the past month, participants in the conflict, and even those on the sidelines, began formulating their plans for regional security—and trying to enlarge their influence in the area. On Feb. 6, U.S. Secretary of State James Baker announced a five-point program for regional security that may require a continued U.S. naval presence in the Gulf. Then, Iranian President Ali Akbar Hashemi Rafsanjani swiftly detailed his own, seven-point plan calling for the withdrawal of all Western forces from the Gulf in exchange for Iraq leaving Kuwait. And Prime Minister Brian Mulroney proposed a world conference to limit the sale of high-tech weapons to countries like Iraq.

Meanwhile, Soviet President Mikhail Gorbachev’s unsuccessful eleventh-hour peace initiative to avoid a ground war appeared to be an effort to stake out his own role in the postwar Middle East. Foreign ministers of the European Community, which has traditionally supported an international peace conference to resolve the Israeli-Palestinian issue, met in Luxembourg last week to begin shaping their own postwar proposals. Israeli Prime Minister Yitzhak Shamir has continued to reject calls for either a peace conference or negotiations with the Palestine Liberation Organization.

Washington insists steadfastly that the Palestinian issue must not be linked to Iraq’s withdrawal from Kuwait. But the United States will clearly be forced to address that problem when the war is over because of pressure from

Arab states. Said Trevor Taylor, director of the international security program at the Royal Institute of International Affairs in London: “The Arab backlash against the West has become apparent. We must show that we are serious about resolving the Arab-Israeli dispute.”

That will prove difficult.

The war has already heightened tensions on both sides of the conflict. Fearing terrorist attacks, Israel has imposed curfews on the occupied West Bank and Gaza Strip, and prevented thousands of Palestinians in Jordan from returning to their homes. In turn, the Palestinians’ vigorous support for Iraq’s war effort has hardened Israeli opposition to giving up even part of the occupied territories. As well, the PLO’S firm support for Hussein has made that organization a political pariah in much of the world, while Israel gained international prestige by its military restraint in the face of repeated Iraqi Scud missile attacks on its cities.

Bargaining: A decisive victory over Iraq by the U.S.-led coalition forces could weaken Israel’s argument that the occupied West Bank is essential to its security. But the Israelis will not go easily to the bargaining table. Said one senior Western diplomat in the Jordanian capital of Amman, who spoke on condition of anonymity: “I cannot imagine a more laborious, exasperating, drawn-out and appalling negotiation.”

The continuing absence of a settlement between Israelis and Palestinians in the postwar region could cause severe problems for neighboring Jordan. King Hussein has responded to widespread pro-Iraqi sentiment among Palestinians, who make up nearly 60 per cent of the country’s population, by supporting Baghdad. That cost him the financial support and sympathy of the Gulf states. But in the future, Jordan’s importance as a strategic buffer between Israel and Syria may enable the king to slowly repair relations with the wealthy emirates. “The history of the region,” said the diplomat in Amman, “is replete with examples of kissing and making up.”

But the king may also face internal difficulties. If Iraq appears to have suffered a humiliating defeat, said Adam

Garfinkle, a Jordanian specialist at the Foreign Policy Research Institute in Philadelphia, Palestinians could yet turn their frustrations against the monarch. He added: “There is a likelihood of protracted instability.”

The Gulf states themselves will clearly be

vulnerable after hostilities end, especially if an angered Saddam Hussein remains in power with a substantial military arsenal. To help deal with that, coalition forces, perhaps under the UN flag, may have to secure Kuwait’s borders. Canada and five Nordic states offered to send observers to monitor Iraq’s withdrawal from

the occupied emirate. Still, the components of a lasting security arrangement remain unclear.

Security is a long-standing preoccupation in the Gulf region. In 1981, the tiny states south of Iraq—Kuwait, Oman, Qatar, Bahrain and the United Arab Emirates— joined with Saudi Arabia to form the Gulf Co-operation Council. The council was established in part to counter threats from the fundamentalist Iranian regime. According to Mark Heller, visiting senior fellow at the Canadian Institute for International Peace and Security, they

have based their defence on three pillars: maintaining a balance of power between Iran and Iraq, appeasing their more powerful neighbors with financial aid, and using U.S. naval forces in the region as deterrents. Added Heller: “In fight of what has happened in Kuwait, they realize that appeasement is not very helpful and deterrence is not very effective if it is far away over the horizon—they will have to rethink their security doctrine.”

Larger Middle East states have also become involved in postwar planning. In a Cairo meeting with officials of the Gulf Co-operation Council on Feb. 16, Egypt’s and Syria’s foreign ministers discussed deploying their troops as part of a regional security force in exchange for aid and investment from the Gulf states. But some analysts say that for any arrangement to succeed, the United States may have to leave behind much of its artillery and a small, mobile ground force, in addition to a strong naval presence. Some experts have also called on Iran and Turkey, the only NATO member in the region, to take an active role in Gulf security arrangements. But any foreign military presence could evoke images of colonialism and destabilize £ the emirates. Said Marvin Feuerg werger, senior fellow at the Washing5 ton Institute for Near East Policy: ï “They face a difficult dilemma of fac| ing the threat from within or the S threat from without.”

Axis: Iran’s role in the postwar Midg die East may be a key factor in regional I stability. The Egyptians have indicated ^ their opposition to Iranian participation in any peacekeeping force. Said one Egyptian diplomat at the Cairo meeting: “The main movers in postwar security are Saudi Arabia, Egypt and Syria.” And although Baker has said that Iran could have “an important contribution to play,” Washington has clearly sought to limit Tehran’s role.

The Americans may be underestimating the strength that Iran now commands in the area. Said Omar al-Hassan, chairman of the independent, London-based Gulf Centre for Strategic Studies: “The Iranians are really going to play the main role in this postwar Gulf.” If Saddam Hussein is eliminated, he added, Iran will seek to influence the new Iraqi regime. Then, Iran and Iraq may form a powerful Islamic fundamentalist axis. Other analysts claim that Iran will pose a threat to regional security only if Washington ignores its concerns and continues to play an active, visible role in protecting the Gulf states. That would destabilize U.S.-Iranian relations, said the Reves Center’s James Bill. He added: “We could find ourselves in three to four years having to go to war with Iran.” Clearly, no security system will succeed in stabilizing the region quickly after a punishing war. 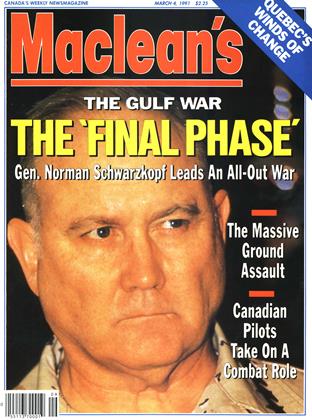