Vincent Edward Jackson is known simply as Bo to millions of North Americans as the result of endorsements of mass-market sports products that exploit his mastery of both baseball and football. Amid all the hype, Jackson has proven to be the genuine article. Typically, Nike Inc., the Beaverton, Ore.-based manufacturer of running shoes, launched an advertising campaign featuring Jackson during the televised July, 1989, major-league baseball all-star game in Anaheim, Calif. Jackson, an outfielder with the Kansas City Royals of the American League, came to bat right after NBC TV aired the first of the now-famous “Bo knows” commercials. He smashed a home run over the leftfield wall—amply demonstrating his value to fans and advertisers alike. Indeed, when Jackson’s doctors disclosed last week that hip injuries he sustained in a Jan. 13 National Football League (NFL) game might permanently sideline the versatile star, Nike’s stock price fell by nearly $6, to $451/2 a share.

Despite reports of the injury, officials of Jackson’s football team, the Los Angeles Raiders, said that the club would honor its $1.6million 1991 contract with the star running back. But the Royals put Jackson, 28, on waivers after their team physician, Dr. Steve Joyce, said that he would not be able to play baseball during the 1991 season. That meant that another major-league team could acquire

Jackson for $1, providing it is willing to honor his $2.7-million 1991 contract. But no team claimed him and, at the deadline last Friday, Jackson became a free agent.

Jackson was bom in Bessemer, Ala., and attended Auburn University in Auburn, Ala., on a football scholarship. He emerged as a star on the college’s baseball and football teams and won the 1985 Heisman Trophy as the out-

standing player in U.S. college football. In 1986, Jackson signed a contract with the Royals and, in 1987, made a deal with the Raiders that allowed him to join the team in mid-season after the baseball season ended. Last year, Jackson had his best season in baseball, batting .272 with 28 home runs and 78 runs batted in. In football, he became the only running back in NFL history to run twice for touchdowns of longer than 90 yards. As his popularity grew, Jackson signed multimilliondollar promotional contracts with Nike, PepsiCo, AT&T and other firms that together paid him an estimated $4.6 million annually.

As a result of his injury, there were grim predictions that Jackson might never be able to compete as a professional athlete again. Orthopedic specialists said that Jackson’s injury had stripped the vital lining of cartilage from his left hip, leaving him with a painful bone-on-bone hip-socket condition. Joyce said that as a result of the injury, the flow of blood to Jackson’s left thighbone where it meets the hip had been reduced, causing a condition known as avascular necrosis, which has begun to destroy bone cells.

For his part, Dr. James Andrews, an orthopedic surgeon at the Alabama Sports Medicine and Orthopedic Centre in Birmingham, said after examining Jackson that although he had sustained a “significant injury,” he might recover sufficiently to play sports again. Jackson, who left the examination using crutches, told reporters: “Don’t count me out.” Still, the medical prognosis suggested, at the very least, that one of the most renowned careers in American professional sports was unlikely ever to regain its former lustre.

Before he stepped into the ring last week at the Mirage hotel in Las Vegas to fight Mike Tyson, Canadian heavyweight boxer Donovan (Razor) Ruddock and his handlers were worried. Their concern was not just about Tyson, the 24-year-old former title holder. The handlers of Jamaican-born Ruddock, 27, who lives in North York, Ont., also expressed concern about the choice of referee Richard Steele. As it turned out, Steele figured prominently in the outcome of the controversial fight. With 38 seconds left in the seventh round of the scheduled 12-round bout, and with Ruddock still standing after being rocked by a flurry of punches from Tyson, Steele stopped the fight and awarded the victory by technical knockout to Tyson. The decision raised

new questions about professional boxing—and about Steele himself.

When the fight ended,

Ruddock was behind in points and had suffered two knockdowns, but he was standing up gamely to Tyson and, in the sixth round, had rocked Tyson with a powerful right-left combination. Afterwards, Steele claimed that Ruddock was hurt and helpless against Tyson.

Ruddock’s supporters had complained about Steele a week earlier, when they disagreed with the referee’s definition of holding. They also objected because Steele works as a pit boss at a gambling casino owned by Stephen Wynn, who also owns the Mirage and other hotels that will stage several fights this year in conjunction with promoter

Still, the disputed decision might eventually rebound to Ruddock’s benefit. After a scheduled match between the current world heavyweight champion, Q Evander Holyfield, and former champion George f Foreman on April 19 in At5 lantic City, NJ., Tyson is I expected to take on the winner and emerge once again as champion. Some boxing experts said that after that, as a result of the Canadian fighter’s dogged performance in Las Vegas and the controversy surrounding the fight, Ruddock might be in line for another bout with Tyson—and a shot at the title. 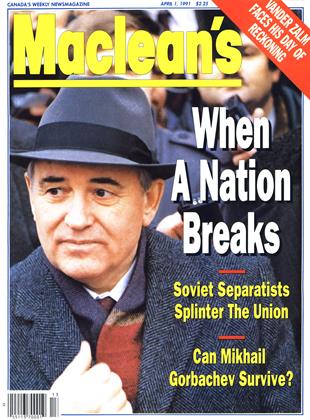