For nearly a quarter of a century, the Stanley Cup has belonged to an exclusive group of hockey clubs. The past 23 National Hockey League championships were won by just six teams: the Edmonton Oilers (five times), Calgary Flames (one), Montreal Canadiens (nine), New York Islanders (four), Philadelphia Flyers (two) and Boston Bruins (two). But this time around, the postseason’s traditional powerhouses all lay vanquished and, instead, the best-of-seven final series turned into a showdown between two unexpected contenders—the Pittsburgh Penguins, who finished the regular season with the seventh-best record in the 21-team league, and the long-shot Minnesota North Stars, who were 16th. But although the Penguins and the North Stars are surprising contestants for Lord Stanley’s silver trophy, they are not flukes. In splitting the first two games last week, the upstart teams launched what could turn out to be one of the most exciting Stanley Cup finals in recent memory.

The unexpected final thrilled hockey enthusiasts in Minnesota, where home-town fans jammed the Metropolitan Sports Center in Bloomington after staging pregame parties in

the stadium’s parking area. At Pittsburgh’s Civic Arena, an Elvis Presley imitator danced in aisles with fans amid thunderous chants from the sellout crowds. The first Stanley Cup final in a decade between two U.S.-based teams, and the presence of the Cinderella North Stars, sharply increased American interest in the series. SportsChannel America, which holds U.S. television rights to NHL games, said that the series had generated three million new subscribers since Minnesota advanced to the final, and that advertising revenue was up by 10 per cent, to $2.2 million, from those earned from last year’s final between Edmonton and Boston.

The reaction of Canadian fans to the all-American Stanley Cup final was mixed. Said Louis Soop, 54, a census consultant in Calgary: “I haven’t followed the Stanley Cup since Calgary was eliminated.” He added: “I know most players on American teams

are Canadian, but I am just not interested when no Canadian cities are represented.” For his part, Peter Weegan, a 26-year-old home-care worker in Montreal, said that he stopped following the playoffs when his city’s Canadiens were eliminated. “I’ve lost interest,” he said.

Still, Denis Cloutier, a 28year-old Montreal stockbroker, said that the series offered “a nice change from the usual teams,” and added that he was backing the North Stars because Minnesota’s coach, Bob Gainey, who retired as a player two years ago, is a former Canadiens star. Said Cloutier: “The North Stars play his style. They are as aggressive and disciplined as he was. It’s fun to see them play.”

£ Indeed, those traits were £ clearly in evidence during the % Stars’ 5-4 victory in Game 1 33 of the final last week in Pittsburgh. The North Stars twice were saddled with penalties that put them at a two-man disadvantage but, on both occasions, their tenacious penalty-killing kept the Penguins from scoring. And in the dying seconds of the game, with Pittsburgh frantically attacking the North Stars net in search of the tying goal, Minnesota’s fierce checking and the skill of goaltender Jon Casey preserved the visitors’ victory.

In the second game, last Friday, Pittsburgh centre Mario Lemieux sparked the Penguins’ victory with a sensational goal that inspired his sagging teammates and electrified the 16,164 fans. After falling behind 2-0 in the first period, Minnesota scored early in the second and had seized the momentum from the seemingly lifeless Penguins. But with the North Stars on the attack, Lemieux picked up a loose puck deep in his own end and, in a dazzling solo effort, skated past two Minnesota defencemen and slipped a backhand past a sprawling Casey. The Penguins scored once more to win 4-1.

The roots of what now is being called the Minnesota Miracle reach back to last summer, when George and Gordon Gund, the North Stars’ owners, threatened to move the franchise to San Jose, Calif., because of declining attendance at the Met Center. Instead, the NHL offered the brothers an expansion franchise in San ^ Jose and access to half the § players in the North Star ork ganization in return for leav| ing the team in Minneapolis2 St. Paul. After a confusing 8 series of transactions, Caigáis ry native Norman Green, a I millionaire property developer who now has a home in the

Minneapolis area, purchased the North Stars and installed Bobby Clarke, formerly of the Philadelphia Flyers, as general manager. Clarke in turn hired Gainey as head coach. Hockey analysts predicted that the two men would improve the fortunes of the floundering franchise.

The North Stars did improve, although not right away. They suffered through a dismal early season and had the worst record of the 16 teams that qualified for the playoffs. But in the playoffs, the North Stars defied the odds and became giant-killers, demonstrating unexpected reserves of skill and determination.

Most hockey experts give Gainey and Clarke credit for the transformation. As a Montreal Canadien, Gainey won the Frank Selke Trophy as the NHL’s best defensive forward four times. The tireless, unselfish style that Gainey showed as a player appears to have rubbed off on the North Stars. It enabled them to upset Chicago, which finished the regular season with the league’s best record (106 points in the regular season, compared with Minnesota’s 68), then do the same thing against the second-ranking St. Louis Blues (105 points). Finally, in a staggering upset, the North Stars defeated the Oilers, the defending Stanley Cup champions.

The North Stars’ fortunes were also boosted by shrewd player acquisitions, and by the emerging talents of existing players. Last sum-

mer, Clarke signed veteran free agents Brian Propp, 32, and Bobby Smith, 33. The two veterans added experience and key goals to the Minnesota attack. As well, Brian Bellows, the team’s leading playoff scorer, and defenceman Mark Tinordi blossomed under Gainey’s tutelage. As a result, the North Stars gradually built up an efficient scoring machine, led by Bellows and centres Neal Broten and Dave Gagner. On defence, Tinordi anchors a veteran unit that has kept most opposing snipers away from Casey.

In any other year, Pittsburgh might be the underdog. Like Minnesota, the Penguins have spent 23 seasons in the NHL without ever winning a Stanley Cup. As well, Pittsburgh also achieved its current success with a largely revamped management: Craig Patrick, the general manager, is in his second year with the team, and the past season was coach Bob Johnson’s first with the team.

But if the Penguins had an advantage, it was the 25-year-old Mario Lemieux, the six-foot, four-inch centre who is the league’s secondmost potent offensive force after the Los Angeles Kings’ Wayne Gretzky. As the final series began last week, the bad news for the North Stars was that Lemieux appeared to have returned to form after recovering from a nagging back injury. And his brilliant goal on Friday confirmed that diagnosis. Said Lemieux about his first Stanley Cup final: “There are a lot of players who have great careers but never get the chance. You have to enjoy it while it lasts.” For these unlikely Stanley Cup combatants, the good times have lasted much longer than many expected. 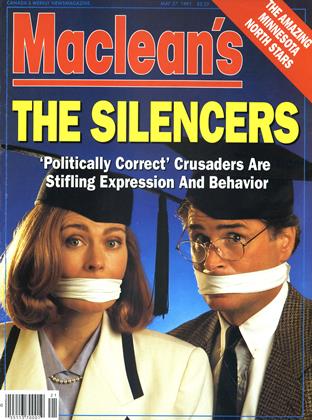