POWER HAS AGED HIM, BUT FAMILY AND FRIENDS ARE HIS REFUGE FROM PUBLIC DISLIKE

POWER HAS AGED HIM, BUT FAMILY AND FRIENDS ARE HIS REFUGE FROM PUBLIC DISLIKE 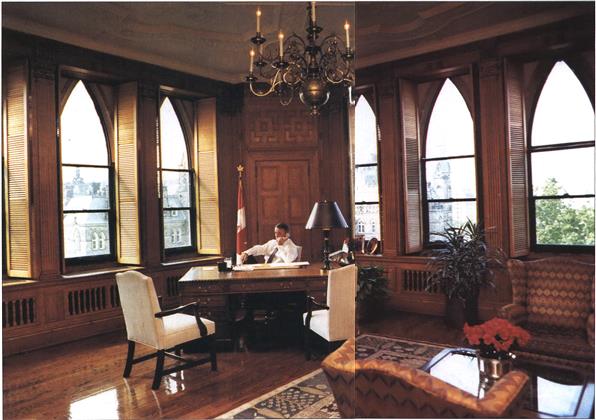 The Prime Minister in his Parliament Hill corner office: 'I like a scrap'

The image of the youthful, ambitious figure who led the Conservative party to its greatest electoral victory is little more than a faded memory now. When Brian Mulroney was first elected Prime Minister of Canada in September, 1984, his face was unlined, his hair dark, his eyes clear, and he moved with the vigorous assurance of someone who was confident that his best days lay ahead. Less than seven years later, at age 52, his hair is grey, the half-moon reading glasses are perched on the end of his nose more often, and his choppy, uneven gait—caused by an unbeatable inner-ear ailment that Mulroney does not like to acknowledge—is more pronounced. He has aged, says one close friend, “shockingly.” And the man who once charmed strangers with his boyish smile is now in such public disrepute that he might better be described as the face that launched a thousand protests. But in a recent interview with Maclean’s, as he discussed his feelings about the political challenges that beset his Conservative government, the Prime Minister said that his years in power had tempered—as well as aged—him. Declared Mulroney: “I am a pretty strong old guy.”

He needs to be. Since public opinion polling began in Canada almost 50 years ago, no prime minister has elicited as much open disapproval. That popular displeasure transcends policy: dislike of Mulroney as a person is widespread and, at times, visceral. A devoted family man who is now a nonsmoker and teetotaller, Mulroney has been subject to some of the most viciously personal gossip of any recent Canadian public figure. Friends tell stories of Mulroney’s thoughtfulness and his infectious—if frequently vulgar—sense of humor. But commentators more often characterize his public manner as ponderous, inflated and overly smooth—adding that it makes him appear untrustworthy. Largely as a result, he is often faulted for lacking leadership qualities—although Mulroney’s free trade, tax and constitutional policies have changed the country more profoundly than those of most of his predecessors. With characteristic combativeness, Mulroney responds to the leadership criticism:

“That is exactly what they said about Sir John A. Macdonald.”

Pressures: In fact, some observers say that the causes of Mulroney’s unpopularity are beyond his control—or that of any other Canadian political leader. “It’s the office, the job of being prime minister itself, that is the real problem,” said Michael Adams, president of the Toronto-based Environics Research Group polling company. Noting the country’s physical size, its long-standing regional and linguistic tensions and the demands of hard-edged media scrutiny, Adams added: “You have instantly more pressures and cross-pressures than the president of the United States.” But others accuse Mulroney of authoring his own misfortunes. Said James Bickerton, the chair of political science at Mulroney’s own alma mater, St. Francis Xavier University in Antigonish, N.S.: “His personality contributed to it—his tendency to overexaggerate, his unctuousness.” Plainly, what Bickerton calls the public’s

“vilification of Mulroney” can obscure obvious talents. Even detractors acknowledge that he has achieved remarkable success in holding together the fractious mix of francophone Quebecers and anglophone westerners—despite defections by members from both regions— that forms the bulk of his Tory caucus. Internationally, he has also demonstrated an ability to defuse hostilities. When Mulroney last week persuaded Japanese Prime Minister Toshiki Kaifu to apologize for his country’s treatment of Canadian military prisoners during the Second World War, it marked the first such gesture from a Japanese leader to any Western country. For his part, Mulroney said that Canada would support Japan’s efforts to obtain a seat on the UN Security Council.

Vengeful: But Mulroney’s conciliatory side is undercut by a vengeful streak. Since coming to office, his relations with the media have become bitter on both sides. Mulroney has said that he is infuriated by the media’s use of critical quotes by off-therecord sources. But after Joe Clark defeated Mulroney for the party leadership in 1976, Mulroney himself was a leading source for such remarks. And Mulroney too often seems to be the first and most effusive admirer of his own accomplishments. When he shows visitors around his official residence, he takes pride in pointing out photographs of his meetings with world leaders and contrasts those signs of his warm relations with them to what he says was the coolness that they felt towards former prime minister Pierre Trudeau— whom Mulroney often privately calls “that son of a bitch.”

Many of Mulroney’s better qualities do not shine through in public. When commentators speculated publicly in 1989 that he might fire Finance Minister Michael Wilson because of a budget leak from his department, Mulroney telephoned Wilson’s aged father to reassure him that his son’s job was safe. Two years ago, when a Montreal journalist checked into a private alcohol detoxification clinic, he was startled to receive a telephone call from Mulroney, offering encouragement. And when Toronto Mayor Arthur Eggleton—a Liberal—recently announced that he would not nm again, Mulroney called to congratulate him on his public service.

Publicly, Mulroney shares few details of his private life. Renowned among friends in the late 1960s and 1970s for his many relationships with women and what a friend from that era describes as “a remarkable capacity to absorb vast amounts of booze without showing the effects,” Mulroney quit drinking in the late 1970s. He now dislikes discussing that decision and never refers to any relationships before his marriage to Mila in 1973.

Outside his marriage, Mulroney’s attitude towards women is ambiguous. Although he has named more women to cabinet positions than any previous prime minister, his close friendships are with a tight circle of men he knows from his days in Montreal. In a revealing exchange at one meeting two years ago with other world leaders, Mulroney described thenimmigration Minister Barbara McDougall as “extremely bright and competent—and, I would add, quite pretty.” Friends say that such references reflect Mulroney’s small-town upbringing in the 1950s and are meant as compliments. Said one: “Intellectually, Brian knows women are equals. But emotionally, it is hard for him to form real friendships with them.”

The exception appears to be Mila. And for that reason, close friends found two unsubstantiated but widely circulated rumors that spread across the country in the past year especially frustrating. One of them was that Mulroney had begun drinking again and was doing so heavily. The second alleged that he and Mila were estranged, partly as a result of the supposed drinking. In April, Mulroney gave an offthe-record speech at the annual National Press Gallery dinner in which, newspapers reported, he joked about meeting Mila by accident as “she was coming in from Montreal and I was leaving the liquor store.” But in his first public comment on the subject, speaking to Maclean’s, Mulroney strongly denounced the rumors: “I was astonished that anyone who knows something about me and my values would pay any attention to this.”

Melancholy: Indeed, friends say that there was another—and more creditable—explanation for a pronounced change in Mulroney’s demeanor through the summer and early fall of 1990. Almost exactly a year ago, Mulroney was devastated by the defection from his cabinet of his close friend Lucien Bouchard, who promptly announced his support for Quebec independence. Bouchard’s actions, and the collapse of the Meech Lake accord shortly afterwards, left Mulroney so depressed, say close associates, that virtually all government decisions last summer were left to Deputy Prime Minister Donald Mazankowski. Still, Mulroney appears to have shaken off his melancholy.

In fact, despite both unpopularity and his own assertions in the early 1980s that he would serve no more than two terms, Mulroney now seems determined to seek a third mandate. He told Maclean ’s, “I fully expect to be around the next time,” adding: “I like a scrap.” With that, he once again briefly evoked the cocky manner of his younger self, exuding an air of confidence that his best days lie in front of him.

ANTHONY WILSON-SMITH with GLEN ALLEN and NANCY WOOD in Ottawa