A prescription for the hand-wringers CHARLES GORDON June 17 1991

In a couple of weeks it all begins again. National unity. The words we feared will be back on page 1. The debate will rage full scale. There will be anger and tears, reminders of impending doom and all that. And there will be no avoiding it, unless we leave town.

We all know that part of being a Canadian is listening to people argue about what it is to be a Canadian. But this is ridiculous. Ever since the collapse of the Meech Lake accord a year ago, the unity industry has been toiling mightily. The work was noisy at first, with every dour pronouncement making headlines, every gloomy forecast leading the national news. Later, as we got used to the debate, it dropped off the front page, returning briefly with the appointment of the Spicer commission and making return appearances from time to time.

Canadians could, during the winter and spring, go on with their daily lives, too busy living and working in this country to fret about losing it, too busy enjoying Canada for apocalyptic thoughts about the end of it. But now the Spicer commission report looms. On July 1, it all starts again.

Without prejudging what Keith Spicer says—without a doubt, it will be interesting— we can know what the sequence of events will be. Spicer will report, politicians will debate, media will comment. Various elements will find the report unsatisfying, certain deadlines will be mentioned in a not entirely unthreatening way, many hands will be wrung. A great gloom will settle over the land and some people will

wonder, rightly, if Canadian life would not be a lot better if people stopped chattering about it and just lived it.

The only way to avoid the summer of soulsearching—the second in a row, breaking the previous record—is to leave town. Better-off Canadians can do that by escaping to the cottage, leaving their TVs in the city, avoiding newspapers and turning on their radios only to listen to baseball games. But not all of us are so fortunate. What, for example, about Canada’s young people, upon whom the future depends? They have no cottages. How are they going to escape the debate and save their sanity?

Fortunately, in an odd way, the summer of soul-searching is also the summer of recession. There is a shortage of jobs. That gives young Canadians the perfect excuse to hit the road, travel across the country with an eye to seeing it before (a) they have to settle down, or (b) it disappears.

You know what will happen. They will return with a greater interest in Canada, having seen things they never knew about. For the first time, they will see the ocean, the prairie, the mountains. They will have a greater appreciation of Canada’s diversity, its scenery, its people. They will have horrible experiences in

Travel, they say, is broadening. It is also fattening and it is also, in a paradoxical way, narrowing. It does not make us parochial, but it does make us focus on our own country in a way we might not have before. Canadians who travel in other countries usually come back with a new appreciation for Canada, a place they might have underrated before. Many other countries have things we lack—a long history, to name the most important. But there are things we prize that are harder to find abroad and south of the border. Travel makes us realize that.

We have open spaces, sidewalks that don’t have garbage dumped on them, streets that are not gridlocked, people who are not habitually rude and grouchy at their jobs. Except for parts of our major cities in rush hour, there is a feeling of uncrowdedness that returning travellers find refreshing. It is something they didn’t realize they missed until they went away.

There is also a certain Canadian attitude. It is hard to define, hard for Canadians to recognize that they have, until they go somewhere else and don’t find it. In the United States, to which many Canadians are travelling, as you don’t need to be reminded, certain things are different. Perhaps even the experience of cross-border shopping, a messy spectacle of the post-GST era, will produce one beneficial result. If Canadians look up from their shopping carts long enough, they will realize that they are in a different society, and that there is a price to be paid for living in a country in which golf shirts and pillowcases are cheap.

In travelling, they will miss some of the debate. That is not much of a loss. They have heard the debate before. They will hear it again. It will be around when they get back. The debate is about the Constitution, it is about power. Above all, it is about symbolism. It is about politicians feeling slighted, about intellectuals counting angles on the head of a pin. Travel, seeing things and meeting people, is about none of these things. It is about finding common interest and common ground, and a common interest in that common ground.

The last big patriotic binge this country had was in 1967—Centennial Year, and the year of Expo. It is no coincidence that the highways that summer were full of hitchhikers, kids out to see the country. Maybe, what with one thing and another, no one has been seeing the country lately. This will be a good summer to do it again. 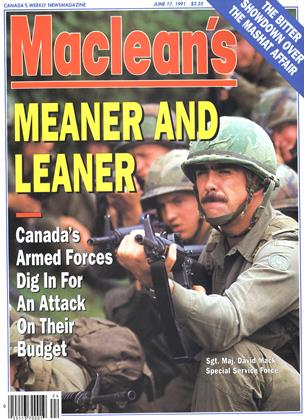