The vegetable garden, set off from the backyard patio and lawn by a low stone wall, is immaculate. Wooden planks on the moist, dark earth provide walkways between the evenly spaced plots of beans, red beets, broccoli, zucchini and lettuce. Tents of opaque plastic sheeting form makeshift hothouses for the English and Italian cucumbers. Sturdy wooden stakes anchor the tomato plants poking through green plastic sheets that protect their large bed. The spring in Coquitlam, B.C., 26 km east of Vancouver, has been wet even by the area’s rain-forest standards. But there are no weeds in Michele (Mike)

Ruggiero’s garden. Looking at the neat plots and large yard with its plum, cherry and pear trees, the 47-year-old Ruggiero said with some pride and much sadness: “I have had more time for the garden this spring—more time than I ever wanted.” Ruggiero has had nothing but time since Feb. 15, when the doors of the Delta Plywood Plant closed behind him for the last time. The native of Bari, Italy—

“It’s on the heel of the boot,” he notes—started working in 1966 at the plant, just 17 km southwest of his home. At first, he was a “feeder,” responsible for loading a kiln with the thin sheets of wood that, once dried, are laminated together to make plywood. Over the next 25 years, Ruggiero spent time at virtually every job at the plant. His last, paying about $680 a week, was driving a forklift truck, loading the plywood sheets onto trucks and railcars for what once seemed to him to be an insatiable market.

But the recession of 1981-1982 crippled British Columbia’s forest products industry— and dealt the plant a blow from which it never recovered. By mid-1990, with the Delta facility

losing money, half of Ruggiero’s 258 co-workers had been laid off. And in September, 1990, the remainder were told by their employer, New Zealand-owned Fletcher Challenge Canada Ltd., that if a buyer could not be found, the plant would close this spring. That buyer did not materialize. Layoffs began again in February, and on the last day of April, the plant officially closed—joining the list of seven other

After his last day of work, Ruggiero—feeling “stunned and depressed”—returned to the white-stucco and red-tile-roofed home that he and his wife, Sabina, 44, tend so meticulously. Every day since, he has scoured the newspaper want ads, called his union office and filled out job application forms. Daughter Mercedes, 22, is doing the same. A high-school graduate, she quit her salesclerk job at the Bay department

store in Coquitlam last October. His other daughter, Lisa, 19, attends community college. Sabina, who has not worked since Mercedes was born, is also looking for a job. “My family is trying to keep my morale up,” said Ruggiero, whose dark, curly hair and unlined face give no hint of his age. “I don’t feel like I am going to kill myself, but I am uptight. My family is jeopardized now. I don’t know what to do every day, I don’t know what to say. All I know how to do is make plywood.”

Teased: Work has defined Ruggiero’s life from the time he and his widowed mother, three younger sisters and a younger brother arrived in Halifax from Bari. “We made our way across Canada and got to New Westminster on July 8,1961,” he recalled. They stayed with his mother’s brother for a month, then found their own apartment. In September of that year, the 17-year-old Michele—who eventually anglicized his name to Mike after being teased that he had a girl’s name—got a job in a furniture factory. “I was the oldest,” he said, “so I had to provide for the family. A friend of my uncle quit his job at the factory so I could

work. I had no English. I was lost. It was tough.” Two months later, working on a table saw at the factory, Ruggiero cut off two fingers on his right hand at the second knuckle. Ten months later, he was let go. “I was never told the reason,” he said.

Through a family friend, Ruggiero landed a job at a local door factory. Two years later, the company went out of business. In 1966, again on the recommendation of a family friend, he was hired at the plywood plant, a job that finally brought some measure of stability. Twenty-five years later, that too has disappeared. Sitting at a table in his sparkling-clean kitchen, Ruggiero’s eyes watered occasionally as he spoke quietly of the past—and the uncertain future. “We were living just right with my job,” he said. “I was making $18 an hour, I wasn’t complaining, we were comfortable. It is very saddening. You feel that you have your life all wrapped up, you are looking to the future and the pension. Now, I worry about losing the house.”

After being laid off, Ruggiero collected unemployment insurance payments for three months. Then, in May, those payments ended when he received $17,000 in severance pay from Fletcher—one week’s salary for each year’s service. The family’s monthly mortgage payment is $900. The car payment is $300. Then there are the taxes, heat and hydro bills to pay, food to buy for the family. With the fixed expenses, Ruggiero calculates that if he cannot find a job, the severance money can be stretched another eight or nine months. “The severance, to me, is like something you do to a dog,” he remarked bitterly. “You pat him on the head and he’s happy. It is nothing! I put all my youth in that place. Who is going to hire me now?”

Hostility: Auckland-based Fletcher Challenge, a multinational company with worldwide assets of $14 billion, took over the Delta plant in 1988 as part of a majority-share purchase of the facility’s previous owner, British Columbia Forest Products. At the time, Ruggiero recalled, he and his co-workers were shown a Fletcher video that extolled the virtues of the company and explained that no layoffs were planned as part of the takeover. Three years later, the plant closed—leaving Ruggiero with undisguised hostility towards the multinational giant. “I am too frustrated and too angry to think about Fletcher Challenge,” he said. “Foreign companies should be screened better by the government. They come in and promise the world to people like me and then put us out on the street. As far as I am concerned, Fletcher Challenge destroyed my life.”

Struggling vainly to remain optimistic, Ruggiero says that his job search—with all of its rejections and demands for experience in unfamiliar fields—has been stressful. But, he adds, the thought of having to go on welfare is loathsome. “For me,” he said, “that would be a disgrace. At my age, you feel like you have one foot in a hole and are trying to jump with the other one. But you can’t make it, because there is nothing there to jump to.”

For now, there is the severance money in the bank, shrinking by about $2,000 each month. There are the daily phone calls to friends, former co-workers and the union local to see if anyone has heard anything about employment opportunities. There are the want ads. And there is the garden. Looking out the kitchen window at the walled plot, Ruggiero said: “I usually put in about a dozen tomato plants. This spring, I put in 40. We may need them.” And then it started to rain. 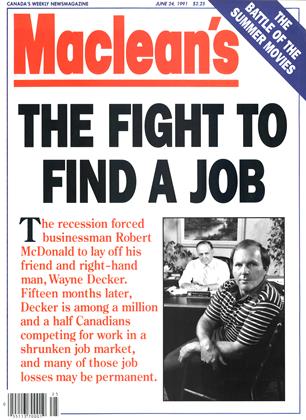