While the Mulroney government has been striving this summer to devise constitutional changes—and to brighten its image for the next election—the most prominent critic of its decentralizing approaches took a midsummer holiday. On the same afternoon that the Conservative party voted at its recent Toronto convention to recognize Quebec's right to self-determination, Pierre Trudeau was 140 km west in Stratford, Ont., attending a performance of Hamlet, William Shakespeare's classic about indecision and how the lust for power can corrupt and destroy a government. The former Liberal prime minister, a fit-

looking 71 in a beige summer-weight suit, stopped off at the Stratford Festival on his way from Montreal to visit two of his sons at a summer camp on Canoe Lake in Ontario's Algonquin Park. During his two-day stay in Stratford, Trudeau went backstage to visit with Montreal actor-director Albert Miliaire, who performs as the Player King in Hamlet and Malvolio in Twelfth Night. Trudeau also took in a performance of that play, the Shakespearean comedy in which Malvolio receives his comeuppance as a result of his own ambitions and self-conceit. But for Trudeau, the author of the 1982 Constitution and the veteran campaigner against Quebec sovereignty, a couplet from Millaire's lines in Hamlet may have been most ominous: "But what we do determine oft we break,/For our devices still are overthrown."

Plans to privatize London’s transit system are threatening one of the city’s most pervasive symbols: bright-red double-decker buses. Along with Big Ben and Buckingham Palace, the buses are synonymous with the city. Under the current system, only the publicly owned London bus company can operate red buses. The handful of private contractors in London paint their buses whatever other colors they choose. Tourism officials have expressed concern that confusion will reign if private operators launch their fleets of blue, green, yellow and multicolored vehicles on the city. Indeed, the London Tourist Board is pressing the British government to shelve the privatization plans. Added to that are pending European Commission regulations on bus standards that will limit the height of new buses to 13 feet (London’s double-deckers are more than 14

feet). Said Kathleen Chellew, a spokesman for the London Tourist Board: “The traditional red London buses are a big drawing card. People like to travel on a red doubledecker as part of their London experience.” Beware the wheels of progress.

Alberta's Beverage Alcohol Advisory Committee, a government-appointed body, is taking a close look at the province's strip bars. Since their first meeting on July 29, members have secretly visited at least seven such establishments. And although most of the three women and eight men have declined to comment until the investigation is completed, one member has evidently seen more than enough. Peter Marcichiw told The Edmonton Journal; “It's not necessary to take all your clothes off to provide entertainment. ” The naked truth.

Director Spike Lee, whose movie Jungle Fever is one of the summer’s biggest box office hits, is getting set to make a film about Malcolm X, the militant Black Muslim leader who was assassinated in 1965. He was so anxious to do the project that he convinced Warner Bros, to choose him over Canadian director Norman Jewison. But the choice has drawn criticism from some quarters, including poet Amiri Baraka (formerly LeRoi Jones), a spokesman for the United Front to Preserve

the Legacy of Malcolm X and the Cultural Revolution. In an open letter, Baraka criticizes Lee’s

films for “their caricature of black people’s lives.” Of Do the Right Thing, he writes: “It told us that our children were killed in our caricatured Hill St. Blues community for playing their radio too loud.” Baraka continues: “We will not have our ‘shining black prince’ distorted out of petty-bourgeois ignorance.” For his part, Lee appeared unmoved. He declared: “While I respect the concern of the writers of the letter, this film will not be made by committee.” Trying to do the right thing.

A waterless christening During the nine-year contra war, residents of the Nicaraguan village of Las Garreadores (named after a kind of ant) firmly supported Ronald Reagan’s anti-Sandinista policies. Now, they have voted to rename their village after the former president to draw attention to their abject poverty. The newly christened Ronald Reagan (population 159), south of Managua, has no roads or wells. Said village councillor Maya Espinoza: “It is because of Ronald Reagan that Nicaragua lives in democracy. But now Reagan has gone, and we have been forgotten.” One man, one vote—and running water.

Gone fishing Where do war heroes go for their holidays? Fishing—in Canada. At least that is how Gen. Norman Schwarzkopf is resting up after winning the Gulf War. The former commander of U.S. Central Command flew into Charlo, N.B., on Aug. 10 with his 13year-old son, Chris-

tian, before taking a car to the world-famous salmonfilled rivers of Quebec’s Gaspé Peninsula. The U.S military declined to disclose his exact destination, but local media and fishermen speculate that he is staying at one of two exclusive fishing clubs in the area—the Brandy Brook Fishing Club on the Matapédia River or the Restigouche Salmon Club on the Restigouche. In choosing Canadian waters, Schwarzkopf joins two other militant American fishermen, U.S. army Gen. George Marshall and air force Gen. Hap Arnold, both of whom make frequent forays into Canada. According to Janet Danks, a supervisor for Air Atlantic, Schwarzkopf was in good humor when he and his son arrived in Charlo. Indeed, Schwarzkopf, who recently sold the rights to his memoirs for a reported $5.8 million, appeared to be in such high spirits that he was undaunted even by the weather. Commenting on the sodden Maritime skies, he told Danks, “That rain is great for fishing.” After all, what is a little rain compared with a desert storm?

BREAKING THE CHAIN Eleven-year-old Craig Shergold of Surrey, England, who has terminal cancer, made The Guinness Book of Records last year after he asked for—and received—more than 16 million get-well cards from around the world. But now, as a result of an unauthorized chain-letter campaign, Shergold is also being deluged with business cards. The unsolicited one-page letter, copies of which are now circulating in Canada, urges well-wishers to send the boy the cards in an effort to win him another world record. But the Shergolds say that they never asked for the business cards—and have been burning them. Declared a family spokesman: "It is a pity business cards are so small. They are not much good for anything.” Return to sender.

A WOMAN FOR ALL SEASONS

makers magazine, to write her biography. Macmillan of Canada has contracted for the book, which will come out next spring. Armstrong told Maclean’s

Canadian Living magazine in 1983. According to Armstrong, Mila Mulroney is anxious to set the record straight because of persistent rumors about marital strife and her husband’s alleged drinking problems. Said Arm-

strong: “She is fed up with the gossip. She is doing this for her children, who see their mother depicted in the media as someone they don’t know. She wants to tell her side of the story.” But Armstrong insists

that her book will not be a “puff piece.” Added Armstrong: “She is a very interesting woman.” 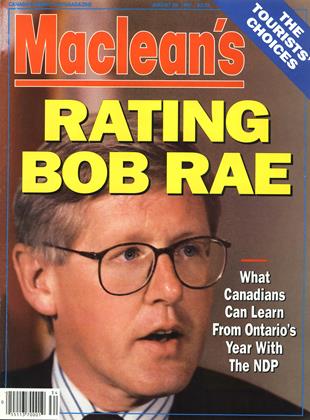