When I heard the news on Aug. 19 that Soviet President Mikhail Gorbachev had been ousted from power, my first reaction was rage (“Red is dead,” Cover, Sept. 2). We, the citizens of the so-called Group of Seven countries, allowed our leaders at the recent G-7 summit to squander an opportunity to promote Gorbachev’s visionary political and economic initiatives. Our righteous seven insisted upon attaching a long list of excessive conditions to a very short list of tangible aid. We snubbed the man most responsible for ending the Cold War. Maybe we had a lot more to do with the attempted coup than we care to think about.

Kevin Doyle is to be complimented for his July 29 editorial, “The G-7 drops the ball,” which pointed out that the summit leaders missed a golden opportunity in not supporting Gorbachev when they had the chance. Is it possible that there are those in both the Soviet Union and the West who rejoiced during the coup at the possibility of a return to the Cold War—or worse?

While we appreciate the coverage of the People Against the NDP Budget protest movement, “Pinstripe power plays” (Cover, Aug. 26) contained numerous inaccuracies, beginning with the headline that distorts the origin and makeup of our group. Of personal concern was the implication that I founded the organization and solely direct its activities. I am a co-organizer and spokesman for the group, but consider myself as one of the “recruited” referred to in your article. Our success in harnessing support against the NDP budget was the result of tenacious commitment by a dozen concerned individuals from varied backgrounds. The article suggests that we are a “bunch of Bay Street power brokers” angry with lost privileges. Such stereotyping could not be further from the truth. We are mostly young, hardworking individuals with grave concerns about the future prospects in Ontario in light of the NDP’s projected orgy of spending. John McBride, Co-organizer and spokesperson, People Against the NDP Budget, Toronto

In “Stepping into their shoes” (Opening Notes, Aug. 19), you end your description of the Houston police force’s attempts to curb attacks against homosexuals with the com-

ment, “Strange bedfellows, indeed.” Instead of applauding the Houston police for their actions, you appear to be taking a position of amazement that they consider gay citizens to be worthy of protection. Your statement begs the question of whether the police should think of homosexuals as a minority not worthy of pro-

tection. I wonder if you would use similar comments had the police been protecting other minorities by going undercover.

REVEALING A LACK OF TASTE

My wife and I are disgusted with your lack of taste and respect for royalty. Your Aug. 26 People item “A royal flash” shows Diana, Princess of Wales, in a bikini and mentions “Britain’s notorious tabloids.” Are you less sensationalistic when you reprint the picture and quote the tabloids’ words?

26) lists the major problems involving some members of the Edmonton police force. To be fair, it should be pointed out that a high percentage of officers do their work well and put their lives on the line each shift. We need to hear about people of courage, enthusiasm and professionalism, as well as about the rogues.

In their book, Deconfederation: Canada Without Quebec, professors David J. Bercuson and Barry Cooper obviously committed heresy by supporting Quebec independence and thereby offending the sensibilities of Allan Fotheringham (“At least Presto! has an excuse,” Column, Aug. 12). The professors argue that Canada would be more efficient, fiscally responsible and politically stable without Quebec. This is hardly subversive stuff.

It will be the bottom line that determines whether provinces and municipal, provincial and federal governments will sink or swim. Money does, in fact, make the world go around. So it is not unreasonable for Bercuson and Cooper to take a look at the economic side of Quebec independence.

The language and insinuations made by Allan Fotheringham towards professors Bercuson and Cooper was Canadian journalism at an alltime low. To nm down their previous accomplishments and education instead of properly pointing out their errors in argument is just plain stupid arrogance.

In Stewart MacLeod’s Aug. 19 column, he states that “if the people didn’t want to hear about it [Mila Mulroney’s $10,000 evening gown at the G-7 summit], the media wouldn’t act as the messenger” (“A sparkling diamond among the dowdies”). I would bet that Canada’s millions of poor people not only do not want to hear about it, but object to having their noses rubbed in it. That dress could have paid for many meals.

I find it offensive that Brian and Mila Mulroney are jaunting all over Europe on taxpayers’ money. For a change, perhaps it would be more prudent to stay at home, show a little less arrogance and try to do something positive for the Canadians who are unemployed or are living below the poverty line.

In Peter C. Newman’s Aug. 19 Business Watch column, “How to streamline our defence system,” he states that “we probably don’t need any” Canadian military colleges. Statements like that demonstrate a lack of knowledge and appreciation of the outstanding record of achievements of ex-cadets in the service of Canada in peace and in war. Their contributions are due to the training, education and personal development that are uniquely provided by our military colleges. And Canada will continue to need the services of this calibre of men and women.

Peter Newman fails to address the most rudimentary area of inefficiency in the Canadian military: the rank structure. Having a generalto-private ratio greater than three times that of other NATO countries defies rationality. We could function adequately with a reduction of 60 generals and a prorated reduction of all ranks, with the exception of privates. Closing superfluous bases is only a start.

Peter Newman recommends that Canada close its three military colleges and conduct all officer training in civilian universities. As a Royal Military College graduate, and at a time when our national identity is in question, I find it hard to accept the idea of throwing away the fine traditions and contributions of these institutions. The colleges host political and military visitors from around the world who wish to see a successful example of nonsegregated training.

They are unique in the service that they provide.

I am one of the thousands of Canadians who tried to look after an elderly parent at home (“Mid-life panic,” Cov-

crunch” became totally overwhelming and severely affected my health. Home support services are limited in Ontario. In my community, such services offer a maximum of nine hours per week, with no nighttimes or weekends.

When looking after a relative 24 hours a day, seven days a week, those nine hours are a drop in the bucket—there are still 159 hours alone.

The decision to move my father into a nursing home was very difficult. I felt guilty, uncaring, selfish—like I was deserting him. Yes, there are people who feel they must keep loved ones at home, but at what cost?

It is with great interest and pleasure that I read “Lessons in how to survive” (Cover, Aug. 12). The following quotation from Boeing Canada Technology president James Sawyer stands out: “Fat-cat CEOs lack the commitment to new tools.” The North American system suffers from the assumption that a highly paid dictator called a CEO is capable of directing an operation into a prosperous, productive future. But each - major industrial operation requires three top men: a financer, a businessman and a technical expert. Only the technical expert can reliably plan which products should be produced and what equipment will be required in the future. To remain successful, a change is needed in the way CEOs operate.

You are to be commended for your Aug. 12 cover package, “Success in hard times.” I am glad to see that we still have people in this country who are able to show some initiative, creativity and leadership. However, I cannot share the same enthusiasm for our political leadership.

“Success in hard times” is proof that the concepts of evolution, adaptation and survival of the fittest are valid in the social and economic senses. Major changes today are governed by geopolitical developments. But what are we doing in Canada? We are trying to settle the peace terms of a battle fought centuries ago by the French and British, and at the same time hoping to kill the Free Trade Agreement. What we should be doing is preparing ourselves for the inevitable—the United States of North America.

Prime Minister Brian Mulroney should not consider Diane Francis’s advice to “roll up his sleeves, undo his tie and show us the genuine article” to be of any great value (“Advice for an unpopular prime minister,” Column, Aug. 5). What offends a whole lot of

Canadians is what he does, not how he presents himself while doing it. Besides, most of us who have seen his relaxed side like it even less than the stiff side.

I was pleasantly shocked by Diane Francis’s Aug. 5 column. One rarely sees a political journalist cut through the petty personal attacks on Brian Mulroney and provide actual insight into the man’s motives and behavior. I reject any argument that Mulroney-bashing is a result of objective consideration. Statistics show that in almost all key facets of Canadian life, we are better off now than in 1984.

Diane Francis thinks that Brian Mulroney has been a good prime minister? I have had plenty of opportunity to watch him in action. Bottom line: in spite of the merits of such policies as the Meech Lake accord and the GST, their delivery was generally lousy. Could it be that Francis has succumbed to his Irish charm?

Diane Francis is right on one point: it takes a special kind of person to make the “tough decisions.” Unfortunately, she forgets that

equally, or even more, important is the ability to make the right decision. That Mulroney may be self-destructing is the best news I have heard in a long time. However, he seems determined to take the rest of us with him.

I was incensed by Diane Francis’s defence of Brian Mulroney. She happens to agree with his stand on free trade, the GST and the Meech Lake accord, and goes on to make an impassioned plea on his behalf for understanding and respect. But what about the majority of Canadians—well over 50 per cent—who happen to oppose those three stands? To follow her line of argument, he has everything to be ashamed of and is rightfully maligned.

Your Opening Note concerning the funding of manure cleanup for the Ottawa city police mounted patrols made no mention of the potential fertilizing value of the inoffensive byproduct (“Nature takes its own course,” Aug. 5). If this fact were widely known to the citizens of Ottawa, there might not be any need for cleanup. 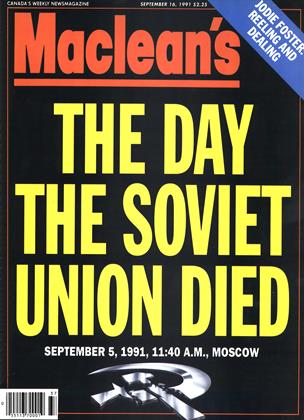