At the movies, female vengeance is suddenly in vogue. A woman kills an abusive man in Mortal Thoughts. A waitress and a housewife become road warriors after shooting a would-be rapist in Thelma & Louise. Terminator 2’s Linda Hamilton—furiously pumping a shotgun with one hand—outmuscles Arnold Schwarzenegger. And in V. I. Warshawski, a karate-kicking detective played by Kathleen Turner uses her legs to both seduce and reduce men. Defenseless is a new thriller about female rage. It is about the violence of last resort and the fear of being defenceless—physically, emotionally and legally. Starring Barbara Hershey as a lawyer who gets too close to an unsavory client, Defenseless is a taut, stylish thriller that puts a novel twist on a familiar formula.

Like the hard-boiled heroine of V. I. Warshawski, T. K. Katwuller (Hershey) is an unmarried professional who has had bad luck with men. Despite her better judgment, she becomes romantically involved with one of her clients, a businessman named Steven (J. T. Walsh). The affair soon turns out to be a fatal mistake. T. K. discovers that Steven is married to an old friend, Ellie (Mary Beth Hurt), whom she has not seen in many years. She also learns that he is involved in an underworld pornography ring that churns out movies with such titles

as Ballbusters and Nudes on the Moon.

In a fit of anger, T. K. breaks Steven’s nose and wounds him with a letter opener. Later that night, a mysterious assailant finishes the job—leaving him dead with multiple stab wounds. Ellie heads the fist of suspects, and T. K. ends up defending her while covering her own involvement for fear of incrimination.

A laconic, low-key Sam Shepard portrays George Beutel, the police detective who investigates the case. Hershey and Shepard form an intriguing study in contrasts. Hershey’s character turns into a nervous wreck, always scrambling to answer the phone before it stops ringing. An independent woman who falls from professional grace, she has let down her defences in what she calls “a world full of creeps.” Shepard’s cop, meanwhile, is impeccably cool. He taps her phone, deciphering the mystery with unheroic detachment. In emotional terms, she is a mess and he is an enigma: they inhabit separate worlds. Untypically, there is no romance to bring them together.

The plot, however, uses some stock devices—including parking-garage suspense and a corrupt district attorney up for re-election. But New Zealand-born Martin Campbell (Criminal Law) directs with a keen eye. Even in predictable situations, he crafts unpredictable images. And despite its tawdry overtones, there is more to Defenseless than meets the eye. 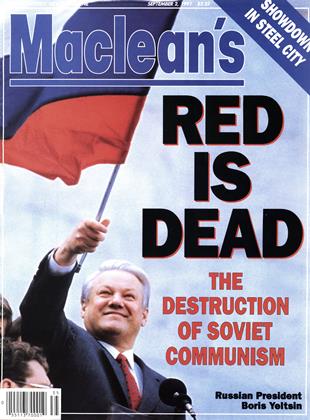