She never told her readers, but Marjorie Nichols never would. A hard-hitting Ottawa newspaper columnist who, at 48, was regarded by both peers and politicians on Parliament Hill as a matchless professional, Nichols spent the last four years of her life fighting cancer—a battle that she lost on Dec. 29 while visiting her family in Red Deer, Alta.

A fiercely determined woman in print and in private, she refused throughout her illness to miss a deadline at The Ottawa Citizen, where her popular, often acerbic political column appeared three times a week. In the midst of one relapse, Nichols pushed a 40-lb. intravenous unit from her hospital room to a corridor pay telephone to dictate

her copy. Described last week by Prime Minister Brian Mulroney as a “trailblazer for women” in journalism, Nichols was adamant that her work should not be affected by her personal tragedy. As she told a fellow journalist, “I want to be known as a columnist, not as a person with cancer.”

Nichols, a reformed heavy smoker, fought a courageous battle after three tumors on her lung were diagnosed as cancerous in February, 1988. After doctors gave her only six weeks to live, she volunteered to undergo experimental chemotherapy treatments so toxic they burned her skin and collapsed her veins. Told that her chances of survival were less than five per cent, Nichols replied: “That’s fine. I’m

tougher than 95 per cent of the population.” Nichols’s will to live was matched by an unflagging dedication to her craft. Born in Red Deer, Nichols graduated in journalism from the University of Montana and began her career in 1966 at the now-defunct Ottawa Journal before joining The Vancouver Sun in 1972 as the first female member of the press gallery covering the British Columbia legislature. Three years later, sent by the Sun to cover federal politics as a columnist, Nichols became the first woman to hold the post of Ottawa bureau chief for a major Canadian newspaper. Said longtime friend and fellow columnist Allan Fotheringham: “Marjorie was the Rona Barrett of Red Deer—and one of the toughest columnists writing out of Ottawa.”

Passionately opinionated, Nichols often infuriated her political targets with well-aimed barbs. Half-seriously, Nichols once told an editor who criticized the one-sidedness of a column that “objectivity is a poor relation to the truth.” Former B.C. premier Dave Barrett, now a federal MP, was so outraged in 1974 by a series of attacks on him by Nichols in The Vancouver Sun that he publicly hurled obscenities at her in the corridor of the legislature. Still, Nichols counted onetime victims among her closest friends, including Barrett and former Liberal leader John Turner. For many politicians, colleagues and readers, Ottawa became a colder, emptier place with her death. 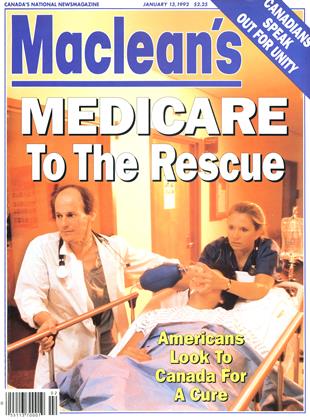