As chief of staff to Prime Minister Brian Mulroney, he worked in a spacious second-floor office overlooking Parliament Hill on Ottawa’s Wellington Street. Beginning on Feb. 1, Norman Spector’s quarters will be in a five-storey office building in downtown Tel Aviv—the location of Canada’s embassy in Israel, where he will serve as ambassador. The diplomatic assignment, announced last week, has led to a wide range of reactions. While Spector’s friends call the posting inspired, critics say that it could damage Canadian foreign policy—and morale among career diplomats. As for Arab-Canadians, many expressed concern about the posting of Spector, the first Jew to hold that sensitive position in the Middle East. Ismail Zayid, for one, a Dalhousie University professor of medicine who is president of the Canada-Palestine Association, said that religious beliefs should not disqualify an individual from a job. But he added of Spector: “There is a potential likelihood he could be biased.”

Certainly, Spector’s assignment breaks new ground. In the past, External Affairs has followed an unwritten policy of not naming a Jew to the embassy in Tel Aviv in order to avoid any impression of a Canadian diplomatic tilt in favor of Israel. But Spector, a cerebral political scientist who speaks Hebrew fluently, downplayed the significance of his Jewish heritage. “I am not particularly religious,” Spector said in an interview with Maclean’s. “I think what people should consider is the great advantage I bring by being fluent in the language of the country.” Indeed,

A former senior adviser to British Columbia’s Social Credit premier William Bennett, the 42-year-old Spector, who learned Hebrew at Herzliah High School in his native Montreal, moved to Ottawa in 1986 to assume control of the Federal-Provincial Relations Office. In that role, he was among the chief architects of the government’s Meech Lake initiative. When that initiative failed in the summer of 1990, Spector initially told friends that he wanted to leave public life altogether. Instead, Mulroney

enlisted him as chief of staff—a role he accepted with misgivings. Recalls former Mulroney communications director William Fox: “He was a reluctant candidate.”

Access: Now, his admirers say that Spector’s keen intelligence and wide range of contacts will serve the country well in relations with Israel. One of those defenders is political scientist Kim Nossal of McMaster University in Hamilton. Says Nossal: “He has an entrée

into the Jewish community here and direct access to the Prime Minister.” But others question whether Spector is up to tackling the murky currents of Middle Eastern diplomacy. For one thing, he will replace a seasoned analyst of the volatile region in current ambassador Michael Bell, who has been at his post for only 13 months—less than half the usual term. Liberal external affairs critic Lloyd Axworthy, for one, said that Spector’s appointment extends “a disturbing trend” by making “the foreign relations of this country an extension of the Prime Minister’s political agenda.”

At least some career diplomats plainly share that perception. According to Donald Mackay, president of the 1,300-member Professional Association of Foreign Service Officers, Mulroney has made more patronage appointments to the foreign service than any recent national leader. Mackay notes that former prime minister Pierre Trudeau appointed 17 outsiders to diplomatic postings during his 15 years in power—while Spector’s assignment marks Mulroney’s 27th such appointment in just over seven years. Complains Mackay: “People in the foreign service serve in hardship posts over a 25-year career only to find the rewards at the end of the day go to people who are looking for a rest from other activities.”

Still, Mulroney appeared to offer an olive branch to the careerists at External last week with the appointment of veteran diplomat Louise Fréchette, 44, as ambassador to the United Nations. The choice reversed the pattern of the last three UN ambassadorships—all of which went to non-career diplomats. Said one senior executive at External, noting the apparent trade-off: “We just got the UN posting, so this [Spector] is an easy one to swallow.” Minefields: But outside the civil service, concerns remained that Spector’s experience as an adviser to Mulroney was a poor preparation for the Israeli-Arab minefields. Said g James Kafieh, president of the To§ ronto-based Canadian Arab Founda| tion: “Our concerns are not tied to g his being Jewish. Some of the most I effective spokespeople defending £ Arabs and Palestinian rights have ” been Jewish.” But he added: “This is one of the most difficult civil service postings in the world.” In particular, Kafieh said: “Mr. Spector played a leading role in advising the Prime Minister on his Gulf War policies and we were certainly unhappy with that. We will be watching very closely.” Clearly, many Canadians will be keenly interested in Spector’s performance—not only as the country’s envoy to a deeply troubled region, but also as a newly minted diplomat who, at the very least, carries considerable political baggage as he leaves Ottawa for Tel Aviv. 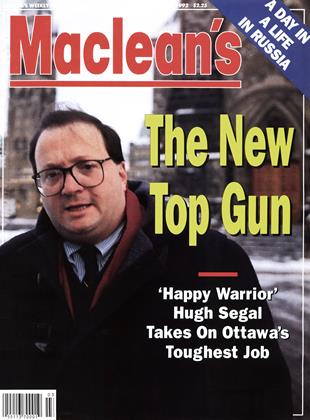