For members of a profession so widely maligned, the five politicians who guided the Maclean’s participants through the constitutional fog garnered surprisingly good reviews. Away from the partisan stage, political posturing gave way to first-name familiarity among the five invitees and Maclean’s 12 forum members, and co-operation replaced rivalry. Said participant Robert Lalande, who admitted he was surprised by his conclusion: “We found out this weekend that these guys are really interested in making this country work. ”Profiles of the five in action:

After lunch on Saturday, the deal maker in blue jeans and scuffed cowboy boots held court long after most other diners at the Montebello forum had deserted the room. David Peterson, the former premier of Ontario, recalled both the pleasure and the perils of cutting political deals. By striking an unprecedented pact with the provincial New Democratic Party in 1985, Peterson toppled a 42-year Conservative dynasty. By contrast, his leading role in the closed-door brokering that characterized the doomed Meech Lake round of constitutional negotiations contributed to his stunning fall from power in 1990, and chased him from active politics. On the vagaries of deal making, Peterson ruefully remarked: “There’s always a chance you might throw yourself in front of a train.”

For Peterson, politics is a passion not easily discarded. He insists that he has no immediate intention of re-entering public life. But many federal Liberals privately regard him as one of the few appealing, nationally known personalities in a party that is largely bereft of such figures. And Peterson retains an impressive array of contacts—and a critical link to outside political interests—in his present dual career as partner in a well-established Toronto law firm and political science lecturer at York University. At Montebello, he argued convincingly that a constitutional package must include a simple but wide-ranging mix of ingredients as “the price of getting people to party.” And at the first sign of a stalemate, Peterson was at his vintage best when he reached for a pen to scribble down his suggestion for an acceptable compromise on the distinct society issue. Several minutes later, the participants came to an agreement.

He is a courtly politician from Quebec who made his personal fortune in the competitive world of international shipping. Perhaps that is why Liberal MP Paul Martin Jr. interjected with visible concern when a member of the Montebello forum questioned the connection between Canada’s economy and the Constitution. Martin argued that the two were inextricably linked. Indeed, the 53-year-old former executive stressed, Ottawa’s proposal to banish interprovincial trade barriers was a critical step towards a renewed Canada. He further argued that an entrenched economic union should include the establishment of a commer-

cial tribunal to enforce free trade among the provinces. Said Martin: “Let’s establish the principles and let things flow from there. ”

It was not the first time the Liberal party’s environment critic found himself wandering onto economic turf. Since his distant secondplace finish to Liberal Leader Jean Chrétien in the June, 1990, leadership campaign, the Montreal MP has blossomed into one of the federal Liberal party’s most versatile stars. A former head of Canada Steamship Lines Inc., a Montreal-based conglomerate of ships, transport vehicles and real estate, Martin is a passionate proponent of sweeping economic reform. And he warned that solving constitutional problems does not automatically lead to a unified country. Said Martin: “In previous eras, a country came together because of war. Our enemies are a declining economy, a deteriorating environment and a failing school system. People out there know that.”

Senate reform is such an obtuse constitutional puzzle that Montebello participants were reluctant to even broach the issue. But on Sunday morning, in a quiet and clear delivery, veteran NDP MP Lome Nystrom untangled the maze and laid the foundation for what was to become one of the three main pillars of the group’s final recommendations. During his 23 years in Parliament, the 45-year-old Saskatchewan MP has developed a formidable expertise on constitutional issues—and a deft ability to identify potential pitfalls. The challenge in Senate reform, Nystrom told the group, is to find the delicate balance between big and small. “The small provinces want more clout at the centre,” said Nystrom. At the same time, he noted, “If we had equality of all the provinces, how does that square with the fact that Ontario has 80 times the population of Prince Edward Island?”

A loner in a party of strong opinions, Nystrom is often at political odds with NDP colleagues. Voting against the 1981 repatriation of the Constitution, Nystrom, then constitutional critic, broke party ranks along with three other Saskatchewan dissidents, protesting what he called a central Canadian bias against the West. And as a member of the BeaudoinDobbie parliamentary committee on constitutional reform, Nystrom disagrees with NDP Leader Audrey McLaughlin that a social charter should be part of the next constitutional proposal. Said Nystrom, with characteristic aplomb: “To sell more than three concepts at one time is very difficult. So you do what is doable and drop the other stuff.”

Dorothy Dobbie: The Rookie Under Siege

She is known as one of the most partisan MPs on Parliament Hill—a trait that has at different times led outspoken Dorothy Dobbie, a rookie MP from Winnipeg, both on a steady climb up the Tory ranks and to the edge of political disaster. Groomed for a possible cabinet post

since her election in 1988, the 46-year-old former publisher is better known nationally as the co-leader of Parliament’s recently gafferidden national unity committee. Dobbie outlasted opposition demands for her resignation, declaring: “It’s my nature to hang on.”

But at the Montebello meeting, Dobbie also displayed an effective mix of directness and flexibility, both qualities that the 12 forum members amply appreciated. In a discussion about technical constitutional amendments, Dobbie declared that Canadians lack a “sense of poetry about themselves.” As she encouraged the Montebello participants to deal frankly with tough issues, Dobbie, in a wistful parallel to her own political experience, told the group: “If you can do it and stay whole and come out of it, I think you will have accomplished something quite extraordinary.” Dobbie’s supporters say that her record of private achievements proves that she can adapt to different circumstances. In the last decade, the high-school dropout and former factory worker built a prosperous family business in trade magazines that, in her absence,

has encountered financial difficulties. As president of the Winnipeg Chamber of Commerce in 1987, she also had influence in provincial economic circles. But the rightwing MP, once quoted as saying that a reduced federal deficit was more important than “the great social experiment,” revealed another side at Montebello. “We are so rich it is almost sinful,” Dobbie remarked. “Why can’t we share without feeling so intimidated?”

Among senior Ottawa bureaucrats, Senator Gérald Beaudoin is often described as one of a rare breed—a “jovial constitutionalist.” At 62, the former University of Ottawa law professor has spent most of his lifetime revelling in the arcane netherworld of Canada’s constitutional history. Until his appointment to the Senate in Septèmber, 1988, he confined much of that passion to lecture halls and to the pages of more than 100 articles he wrote on constitutional law. Since the collapse of the Meech Lake accord, Beaudoin has become an amenable fixture in the political fray. He is a Quebec federalist who was first summoned last winter to be co-chairman of a parliamentary committee to study new ways to amend the Constitution. Then, in November, Prime Minister Brian Mulroney called on him again, this time to replace fellow Quebecer and senator Claude Castonguay as co-leader of the troubled national unity committee with Dobbie.

Steeped in the complex technicalities of constitutional debate, the Montreal-born scholar has a simple message. In Beaudoin’s opinion, amending formulas and vetoes are changeable props on a stage where the real drama—the unfolding history of a vibrant and sometimes fearful nation—is played. Nothing is cast in stone, Beaudoin reminded Maclean’s forum members during a friendly dissertation on Quebec’s role in Canada. Added Beaudoin: “We always think that it is the end of the world to change one thing in the Constitution because we are used to it.” But the survival of a country depends on the will of its people, not words on a piece of paper, he told them. Declared Beaudoin: “There is no way a constitution will last if it is not built on the roots of the people.” 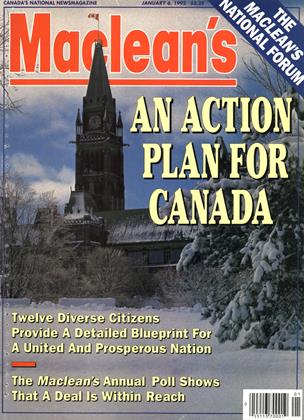