A cool breeze off the Mississippi River rustling his cargo-inventory papers, stevedore Larry Mackey shook his head in disbelief at the elaborate preparations for a presidential visit to the Port of New Orleans last week. As giant cranes lifted broken crates and twisted metal from the oil-slicked Nashville Avenue wharf, cheery Republican volunteers plastered neatly stacked cargo containers with pro-Bush and pro-North American Free Trade Agreement (NAFTA) placards and stapled red, white and blue bunting to a flatbed truck where, the next day, George Bush would speak. Mackey, who had just finished unloading crates of Indonesian plywood from a Korean-flagged freighter, col-

orfully described the trouble that the beleaguered President will face at the ballot box with the longshoremen, clerks and other workers who have watched the steady decline of the once-bustling port. Said the stocky 52-year-old dockworker: “He’s up to his ass in alligators and somebody’s draining the swamp.”

Bush made his third campaign visit to Louisiana last week in an attempt to shore up his sagging support in the South—a vital electoral region, which for more than a decade has been solidly Republican. And although the latest polls show Bush running neck-and-neck in the state with his Democratic rival, William Clinton, elsewhere there was gloomy news for the President’s struggling re-election prospects.

With just three weeks to go before the Nov. 3 vote, nationwide polls showed Bush trailing Clinton by as much as 14 percentage points as the candidates prepared for the first of three presidential debates, on Oct. 11 in St. Louis, Mo. In Washington, Congress issued a stinging rebuke to the 68-year-old President by overturning his veto of a bill to regulate the cable television industry—the first such defeat in his four-year term of office. And nearly 600 economists, nine of them Nobel Prize winners, endorsed Clinton’s plan to revitalize the economy through government spending and tax breaks for business investment.

On the campaign trail, the President was slinging mud. During an interview on the Cable News Network’s “Larry King Live” program, Bush questioned Clinton’s patriotism as he challenged the Democrat to “level with the American people” about his avoidance of the draft during the Vietnam War, his participation in anti-war demonstrations while he was a Rhodes scholar at Oxford University in 1969 and a trip he took to Moscow the same year. “Level. Tell us the truth. And let the voters then decide who to trust or

the country not,” and I’m old-fashioned, world—I’m daughters Bush and demanded. but demonstrate, are dying sorry, I He to go halfway just when added: to don’t a your “Maybe like foreign around sons it. I think it’s wrong.”

far right of his party, and his campaign spokesman, George Stephanopoulos, dismissed Bush’s comments as “a desperate ploy by a pathetic politician.” Stephanopoulos said that if Bush “worried half as much about what the American people are going through in 1992 as he does about what Bill Clinton did in 1969, we’d all be in much better shape.” Another Clinton backer, retired admiral William Crowe, former chairman of the Joint Chiefs of Staff, said: “I strongly resent the implication that any candidate or any political party has a monopoly on patriotism.”

The controversy swirled as Bush arrived on the New Orleans’s docks last Thursday. But in Louisiana, a traditionally conservative state that has suffered a 10-year recession prompted by the collapse of the oil-export industry in 1982, and made worse by high unemployment rates and a growing population, many analysts said that the old flag-waving Republican sales pitch was no longer playing. Voters, they say, blame Bush for the battered economy and feel betrayed by his broken 1988 “no new taxes” pledge. Said Silas Lee, a professor of political science at Xavier University in New Orleans: “Voters are angry at Bush. They don’t think that Bill Clinton can do worse.”

Although Bush took off his pinstripe suit jacket on the docks in an attempt to bond with some of the burly Cajuns in the audience bused in from a non-union shipyard, his down-home

style clearly did not impress some members of the crowd. William King, an unemployed lawyer, for one, said that the deepening recession had crippled the chances of diversifying Louisiana’s economy and of creating new jobs. “People are sick and tired of the same old thing and want a change,” he said.

Like many in the audience, Vickie Boyd was clearly unswayed by Bush’s attacks on Clinton. “George Bush is a sinking ship,” said the 33year-old mother of two. “All he can do is throw out unsubstantiated allegations about Bill Clinton—suggesting that he worked for the KGB because he visited Moscow as a student and go on and on about his character.” She added bluntly: “Those are not the issues. His tactics to get elected are unpresidential and he doesn’t deserve to be president anymore.”

Nearby, two cement workers, Joseph Jones and Rick Jones, who are not related, complained that they had lost four hours of pay because Secret Service agents had blocked their company’s truck from entering the port authority gates. The two men slammed Bush’s record and cursed his visit for temporarily closing the port. “The river represents movement,” said Joseph Jones, waving a planing tool towards the Mississippi. “But now we’re at a steady standstill—you can count the ships that come by on one hand.” Added his workmate, Rick, whose company had cut his hourly pay to $13 an hour from $20 so that it could compete with non-unionized businesses: “The only people hurting are the working people.”

The centrepiece of last week’s Republican campaign strategy was Bush’s appearance with Prime Minister Brian Mulroney and Mexican President Carlos Salinas de Gortari at a ceremony in San Antonio, Tex., to initial NAFTA (page 56). But Bush’s promise of more jobs through the free-trade deal seemed to have gone down as poorly in the Lone Star State as his promise to inject new economic life into the languishing docks of New Orleans. Many Texans appeared more concerned about the flight of jobs across the Rio Grande to Mexico than about the boost to the U.S. economy that Bush has promised the deal will provide. And despite Texas Republican Sen. Phil Gramm’s claim that NAFTA would prove to be “the most significant economic event that will occur in North America in the last half of this century,” many analysts said that its potential impact on Texan voters was difficult to assess. Said James Cullen, editor of The Texas Observer, a biweekly political magazine based in Austin: “Free trade seems to be popular in South Texas. But I don’t think the rest of the state really cares about the agreement.”

Political analysts have begun to say that the election is now Clinton’s to lose, and that if anything can salvage Bush’s presidency it is stellar performances in the three scheduled presidential debates. But with the President hardly known for his oratorical skills, that seemed as unlikely as the mighty Mississippi suddenly reversing its course. 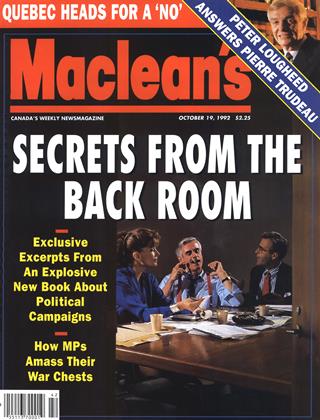