Through their music, literature and film, Quebecers have given voice to their distinctiveness. Now, more than ever, the province’s artists are also looking outward. Maclean’s looks at developments in the fields of popular music, film and the literary arts:

Homegrown music has traditionally been a source of pride and patriotism for Quebecers. Folk singers like Félix Leclerc, who died in 1988, were inspirational during the 1960s Quiet Revolution. Then, during the nationalistic 1970s, songs like Gilles Vigneault’s Mon pays (My Country) became synonymous with the political aspirations of Quebec society. Now, in the 1990s, while Quebec’s music community remains in many ways close-knit and insular, in other respects it has become more outward-looking. Last year, some critics scorned singer Céline Dion for releasing an English-language album. But the fury over efforts to win audiences outside of Quebec appears to have faded. Says Laurent Saulnier, the music critic for Voir, a Montreal cultural tab-

loid: “There is no longer that bad feeling about musicians who make English albums. Most people are just very proud of Céline.”

Even leather-jacketed superstar Roch Voisine plans to release an English album soon. The vixenish Mitsou Gélinas, who performs under her first name, has collaborated with the anglophone Montreal band Men Without Hats. But Quebec still has many popular musicians who write and perform solely in French. Releases by newer artists such as the energetic rocker Jean Leloup, with his trademark striped suits and top hats, singer-guitarist Luc de Larochellière and balladeer Richard Desjardins regularly sell over 100,000 copies—on average, Quebec albums sell 20,000 each.

In Quebec, success comes in many styles. In spite of their age, the three members of Les B.B., all in their early 30s, are commonly referred to as the francophone New Kids on the Block. Glossy young female singers like Julie Masse and the blond, dreadlocked vocalist simply known as Kathleen are the newest additions to a female rock tradition that includes veterans such as Marjo and singersongwriters Marie-Claire Seguin and Louise

Some traditions, though, appear to be fading. Artistic pilgrimages by Quebec musicians to France were once the norm. Some still make the journey—Desjardins, for one, is spending the fall in Paris, where he has been wellreceived. But French fans remain a little confused over many Quebec musicians, who are difficult to categorize because they sing both ballads and driving rock. Occasionally, a singer like Voisine will draw huge Parisian audiences. Still, many Quebec performers no longer need continental acclaim to feel successful. Said Saulnier: “More and more now, people are beginning to realize that you do not need to go to Paris to be successful.”

As well, few Quebec singers and musicians are as openly nationalistic as their counterparts of the 1960s and 1970s. Many have avoided publicly taking sides in the referendum campaign. But at least one, Dan Bigras—whose heart-wrenching songs are increasingly popular—is campaigning for the No side. He represents a link to a past when Quebec music was not merely popular—but political.

Canada’s movie industry contains two distinct film-making cultures—and the nominations for the 1992 Genie Awards, announced last week, make it clear which is the more successful. Of the movies selected for best picture, only one, director David Cronenberg’s Naked Lunch, comes from English Canada. The others are all French-language films from Quebec—Uolo, Being at Home with Claude, Requiem for a Good-Looking Bastard and The Saracen.

With isolated exceptions, notably Cronenberg’s work, English-Canadian cinema has failed to achieve major international acclaim or commercial success. English-Canadian movies even have trouble finding an audience within Canada, while Quebec cinema is like a popular literature, with a strong voice and a loyal audience. For years, Quebec’s top film-makers have shown that they can compete with Hollywood products in their own province.

In the process, they have also learned to compete successfully abroad. In the 1970s, such directors as Claude Jutra, Gilles Carle and Jean-Pierre Lefebvre established Quebec’s reputation as a passionate film-making culture. More recently, Denys Arcand twice became the toast of the Cannes Film Festival, first with his provocative 1986 sex comedy, Decline of the American Empire, and then with his 1989 tragicomic gem, Jesus of Montreal.

And if Arcand has become the dean of Quebec cinema, director Jean-Claude Lauzon is its enfant terrible. Lauzon first won acclaim in 1987 with Night Zoo, a stylish thriller, set in Montreal, that is also a drama about the death of the main character’s father. And his current movie, Uolo, an autobiographical portrait of the artist as a young dreamer, has been widely

hailed by European and American critics.

But Leolo’s cultural insolence has touched a nerve among Quebec nationalists. Its adolescent hero, growing up in working-class East End Montreal, fiercely denies his French-Canadian birthright—and insists that he is really Italian. Lauzon’s ability to make a personal film, play with his cultural heritage, and still make sense to critics far removed from Quebec and Canada is impressive. But it is an ability that has largely eluded English Canada.

Moviemaking is an industrial art that relies increasingly on international co-production for financing. But Quebec and the rest of Canada have done little to share their talents and resources. In fact, when Arcand offered to make his first English-language feature in Edmonton, the Alberta Motion Picture Development Corp. turned down the producer’s request for $500,000 in extra funding required to make it possible. The story was set in Edmonton and based on Unidentified Human Remains and The True Nature of Love, a hit play by local writer Brad Fraser. “Edmonton is visually striking,” Arcand told Maclean ’s, “and I’ve never seen it in films. I would have liked to have been the first to capture it.” Arcand has moved the location to Montreal— and Alberta has passed up an opportunity to have one of Canada’s best directors use its capital as a setting for a film that will likely be shown around the world. In art, as in politics, Quebec and the rest of Canada do not see eye to eye.

While Quebec’s politicians debate the province’s future, its writers are looking outward. A new generation of authors has emerged, clearly preoccupied with style and little interested in the nationalistic themes that once fired Quebec

literature. The current literary star is 33-yearold Louis Hamelin, whose tough biker image reflects the razor-sharp edge of his prose. His third novel, published in September, is a murder mystery set in an Indian village in northern Quebec, and like his previous two works it will likely soon be published in France. “Contemporary Québécois literature is extremely exportable,” says Montreal Gazette literary columnist Ann Bois. “There are a lot of co-publications

with French publishers, and the young writers aren’t as interested in defining the territory of Quebec as they once were.”

Robert Lalonde, Claire Dé and Anne Dandurand are other new writers to crack the French market. One reason for their overseas success: they avoid Québécois slang, which makes their work more accessible to the European reader. On the lighter side, an upscale comic book, set in New York City and featuring a Rambo-style character called Red Ketchup, is being brought out simultaneously in Quebec and France this fall by Dargaud, the European distributor of the phenomenally successful Astérix comics.

Meanwhile at Montreal’s venerable Théâtre du Nouveau Monde, newly appointed artistic director Lorraine Pintal has brought in a younger generation of directors to put a fresh, contemporary face on classics, while also presenting modem plays. And renowned playwright Michel Tremblay’s work continues to be popular: his 1968 play The Good Sisters was performed in French, Yiddish and Scottish slang during the last theatre season.

In Montreal, English-language literature is also thriving. In September, 500 people lined up outside a Boul. de Maisonneuve restaurant. The occasion: readings by five anglophone writers from their work. The English-language literary community is strong enough to sponsor annual prizes in poetry, non-fiction and fiction totalling $6,000. English-language theatre is also experiencing a renaissance, with more than 20 companies—compared to about four 10 years ago— now vying with the 24-year-old Centaur Theatre for audiences and funding.

Anglophone writing and theatre are also attracting francophone audiences. Margaret Atwood has cracked the Quebec best-seller lists. Works by Mavis Gallant and Robertson Davies are also readily available in translation. In September, Mordecai Richler’s controversial Oh Canada, Oh Quebec appeared in a French translation published by Les Editions Balzac. Declared editor André Beauded, who said that he expects sales to be brisk: “It’s a much more nuanced argument than most critics gave him credit for. The book deserves to be read.”

On the stage, highly acclaimed French-language productions of two plays by Toronto-based Judith Thompson have been mounted in recent years. Unidentified Human Remains and the True Nature of Love, by Edmonton’s Brad Fraser, was a huge success in French. Fraser’s new play, The Ugly Man, will open, also in French, at the Théâtre de Quat’Sous g next spring—part of Quebec’s thrivx ing literary arts scene. Whether in § English, French or indeed other lan! guages, Quebec’s literary arts scene § reflects the vitality of its politics. 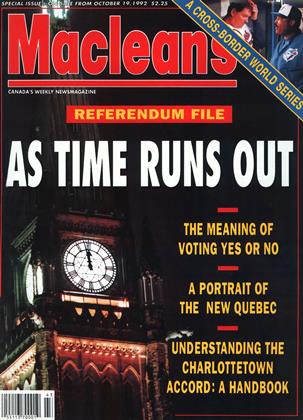