Key to his heart

The CBC airs a tribute to Oscar Peterson

Key to his heart

The CBC airs a tribute to Oscar Peterson

The most surprising thing about In the Key of Oscar, the new film biography of Oscar Peterson, is that it is the first ever made of the great jazz pianist. Montreal-born Peterson, an internationally renowned jazz musician who has received dozens of accolades, awards and honorary degrees in his 50-year career, explained the absence to Maclean's in a recent interview. “It never crossed my mind,” said Peterson, 67. ‘Tm a very private person.” But making a documentary about Peterson did cross the mind of his niece Sylvia Sweeney, a former television journalist who founded her own film production company in 1986. She convinced her uncle to co-operate, originally intending to make a half-hour program about Peterson’s relationship to Canada. But the project grew, Sweeney told Maclean’s, as she and her fellow director on the project, William Cunningham, realized how rich the material was. The result, a two-hour show due to air on the CBC on Nov. 1, is both a chronicle of Peterson’s astonishing career and a moving glimpse into his emotional reconciliation with his children. Commenting on his niece’s ambition, Peterson said simply, “I had faith in her.”

In the Key of Oscar sketches Peterson’s musical ascent from the smiling Montreal boy with perfect pitch to the venerable musician who watches the guards at Buckingham Palace practise one of his pieces. As the archival footage, family photographs and personal memoirs from such international greats as singer Ella Fitzgerald and trumpeter Dizzy Gillespie unfold, the sheer breadth of Peterson’s experience becomes clear. (“I once made an album with Fred Astaire,” he told Maclean’s. “Yeah, he was an insane jazz fan, had drums set up in his living room.”) What also emerges is an eye-opening reminder of just how powerfully racism affected the lives of jazz musicians of that era. From the segregated hotels in the American South to the hate letters that he got from both whites and blacks about his mixed-race musical groups, Peterson chafes at what he calls “the stupidity of racism.”

Despite the drama of some of those racial encounters, the film’s greatest emotional impact derives from his sentimental journey to Montreal for the first-ever reunion of the extended Peterson family. In the summer of 1991, the musician travelled by train from his home in Mississauga, near Toronto, to his native city with assorted relatives who included his five grown children, various grandchildren and his fourth wife, Kelly. (In a puzzling omission, his wife and baby daughter are never identified as such during the film.) The strain among family members is evident, and their candor remarkable. Narrating the program, Peterson recalls how his gruelling schedule of concert tours kept him away from his first wife and children for many years. Some of his grandchildren had only ever seen him on television. “I’m obviously a man who has made certain mistakes in life,” he told Maclean’s. “And when you get to my age, I guess you can face some of them ”

Born in 1925, Peterson was the fourth of five children of Daniel and Kathleen Peterson, both immigrants from the West Indies. His father worked as a railway porter for the Canadian Pacific Railway, and his mother, a deeply religious woman, worked as a domestic before marrying. In the program, both Peterson and his older sister reminisce about their father, a stem disciplinarian and self-taught musician who insisted that each of his children learn to play an instrument. “My father saw music as a way to escape from the railway,” he says, explaining that the railway was then one of the few avenues of work open to blacks.

Peterson escaped that fate—in extravagant style. With his extraordinary abilities evident from early childhood, Peterson studied classical piano first with his older sister, Daisy, and later with noted Hungarian-born pianist Paul de Marky. At 14, he won a CBC national radio competition and afterward appeared regularly on the airwaves. By the mid-1940s, he had a recording contract with RCA Victor Canada and, as part of the Johnny Holmes Orchestra between 1942 and 1947, he became the first black musician to play at Montreal’s RitzCarlton Hotel. At 22, Peterson was head of his own musical trio that held court at Montreal’s Alberta Lounge, where international jazz musicians came to hear him play.

But the biggest boost to his career came from American jazz impresario Norman Granz, who took Peterson to New York City to play at Carnegie Hall for one of Granz’s “Jazz at the Philharmonic” concerts in 1949. “It was more than a dream, it was a fantasy,” Peterson recalls on-screen, commenting on the thrill of playing and touring with such musicians as Charlie Parker, Dizzy Gillespie, bassist Ray Brown and others at such a young age. But, he says, “What sustained me was that I knew I could play.”

Sweeney, who produced as well as co-directed the film, splices in rarely seen footage of her uncle playing on stage, television and in the studio in the 1950s and 1960s. One of the most affecting musical sequences depicts Peterson accompanying singer Nat King Cole on a version of Sweet Lorraine. Smooth, smiling and making it seem effortless, the two exude a palpable sense of exhilaration. Elsewhere, describing his first encounter with the more explosive side of Peterson’s jazz piano in the 1950s, British music critic Benny Green says, “It was like being fired out of a cannon.”

Both sides of the Peterson style are evident in the 1991 reunion tour with guitarist Herb Ellis and Ray Brown, who formed the Oscar Peterson Trio in its most famous incarnation. And in one snippet, pianist and composer Quincy Jones jokingly comments on Peterson’s formidable influence on other musicians. “If you’re sitting at the piano at a party somewhere and Oscar walks in, well, you just get up,” he says. “Find something else to do. The man is dangerous at a piano.”

With such a wealth of material from which to choose, Sweeney, 36, told Maclean’s that she deliberately kept her focus narrow. (“I mean, where do you stop,” Sweeney said. “The last time he played Japan, they gave him a parade.”) Added the film-maker: “I wanted to tell a good story first of all, about his career. And the family reunion became a vehicle to look at his relationship with his kids.”

In the process, a lot of good material never made it into the film. Sweeney recalls that her brother Kenneth accidentally discovered a previously unheard-of uncle, Phil Peterson. He turned out to be a half brother Oscar Peterson had never met or even known about. Their father, Daniel, had apparently disappeared for a two-year period and had a child with another woman before reuniting with Oscar’s mother. The two half brothers met in Vancouver in early 1991. “Oscar told me that when Phil walked into the room, it was like seeing his father again,” Sweeney recalled. Peterson brought his half brother to the family reunion in Montreal.

Kinship clearly gave Sweeney a special vantage point, which she and co-director Cunningham put to sensitive use. The camera captures intimate scenes of the family reunion that probably would have been declared off-limits to another film-maker. And Sweeney’s mother, Daisy, Oscar’s older sister and an accomplished pianist herself, almost steals the film. Softspoken, straightforward, she is a mesmerizing combination of gentleness and spiritual strength. But paradoxically, having been able to penetrate that far, Sweeney leaves some issues unresolved: what about his other wives, his new daughter and his renewed relationship with his grown children? The film is also marked by a choppy rhythm, particularly near the end, when it veers from Peterson’s patriotism to his experiments with electronic music and back to his family. Still, In the Key of Oscar never loses sight of Peterson the man behind the musician. Entertaining and enlightening, it is a fitting tribute to a prodigious talent. 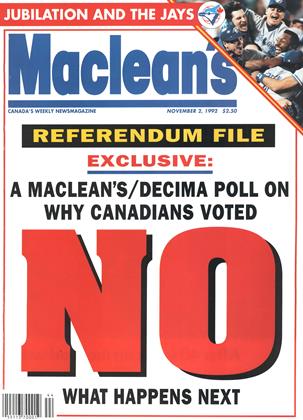