It is a sunny afternoon and the Queen is in the Royal Box at Epsom Downs, south of London, watching the annual Derby horse race along with her family and

entourage. Generous, the horse she picked to win, is trailing as he enters the final turn—and the tension proves too much. Her Majesty grabs her binoculars and rushes to the balcony just in time to see Generous pull ahead as he approaches the finish line. “That’s my horse— I’ve won the sweep!” she exclaims in delight as she turns away and collects her winnings: a

The scene is part of a television documentary on the Queen’s working life entitled Elizabeth R, scheduled for broadcast this week in Britain and Canada. (The program will be carried on CBC TV on Feb. 6 at 8 p.m.) It provides rare glimpses of the Queen in unguarded moments. Forty years after she ascended the throne of the United Kingdom, Canada and her other realms on Feb. 6,1952, she is one of the world’s most famous faces and, at the same time, almost completely unknown.

She has reigned longer than all but two of her predecessors (Victoria, who was Queen for almost 64 years, and George III, who ruled for 59), and most of her subjects in the 17 countries of which she is sovereign are too young to remember any other British monarch. But she has never given a formal media interview, and all of her public utterances, aside from her annual Christmas message, are scripted by the government of the day. Professional royalwatchers have doled out a steady diet of trivia, including her fondness for such pastimes as charades and, of course, horse racing. But not even they pretend to know her personal views on any significant issue of the past 40 years.

Much more is known—for better or worse—about her burgeoning family. Scarcely a month goes by without a new scandal or controversy touching one of the royals, including the recent revelations about photographs of Sarah, the Duchess of York, on holiday with the son of a Texas oil millionaire. Such antics are awkwardly at odds with the monarchy’s supposed role in setting a public example of probity and family values. But they never seem to taint the Queen herself, who has not put a public foot

wrong for 40 years. In fact, writes Antony Jay in his new study of her reign, also entitled Elizabeth R (McClelland & Stewart, $34.95), lesser royals deflect attacks on the monarch “as if they formed a bodyguard, absorbing the blows and thrusts of the enemy in order to protect the Queen.” The only controversy to touch her during the past year is a debate in Britain over whether she should pay taxes on her private income. Her aides point out that Parliament has decided that she should not pay, and it is up to Parliament to change the rules.

Celebration of the 40th anniversary will be deliberately low-key. It is not an official Jubilee year, like the 25th anniversary in 1977, or the

50th, which would be marked in the year 2002. Most attention is focused on the 110-minute television documentary, which will provide the closest look ever at the Queen’s working life. Buckingham Palace gave a British Broadcasting Corp. film crew special access to such events as state banquets and the Queen’s weekly audience with the British prime minister. Photographer David Secombe was allowed to take informal pictures of the Queen in conjunction with work on the documentary. A selection of Secombe’s photographs accompany this article.

The Queen’s aides say that they hope the documentary and the book will increase awareness of the monarch’s role in making the wheels of the British state turn smoothly. At 65, she has guided the royal House of Windsor to the brink of the 21st century with a remarkably high popularity rating. Despite the scandals, surveys put support for the monarchy in Britain at 75 to 80 per cent. The Queen plays at least four roles: head of state, symbolic head of the British nation, head of the Church of England and head of the Commonwealth, including Canada. In Britain, the institution she symbolizes is a chief element of national pride and even a rich source of fantasy. One study, by literary editor and author Brian Masters, claims that about a third of Britons dream about the Queen and her family. In addition to all her other functions, writes Masters, “she is Queen of the British psyche.” 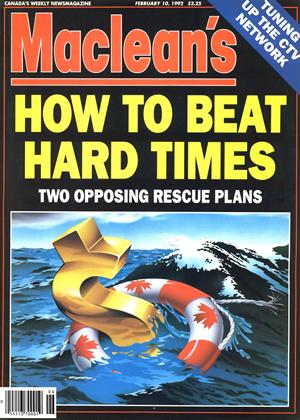