When James Ferry vowed to serve his Creator as a minister in the Anglican Church of Canada in 1981, he says, the decision reflected his deep sense of vocation to the religious life. Then, eight years later, the young minister began what he described last week as a “very deep, very spiritual” sexual relationship with another man. The affair contradicted church law, which holds that no practising homosexual may perform the duties of a minister. At first, Ferry acknowledged, he kept the relationship a secret. But last summer, his religious superior, Toronto Bishop Terence Finlay, learned of his gay affair and demanded that Ferry either end the relationship or resign. The order, says Ferry, presented him with an impossible choice between his vocation and his homosexual partner. Said the 39-year-old cleric: “I could no more

choose between the two loves of my life than I could choose to chop off my arm.”

In the end, Finlay chose last July to chop Ferry from the diocese’s roster of ministers instead. Ferry responded by launching a civil lawsuit for wrongful dismissal against the church and Finlay. Last week, in a rarely convened ecclesiastical court in Toronto, Ferry bluntly accused his church of “terrible hypocrisy” towards homosexuals. And the Anglican rebel was not alone in challenging Christian tradition on the explosive issue of sex. In Winnipeg, Lutheran minister Stan Richards, 52, reflected bitterly last week on the decision that his parishioners made on Jan. 26 to fire him after he confided to them that he was a non-practising homosexual. Meanwhile, an Ottawa-based Catholic theologian, Rev. André Guindon, remained in seclusion while prepar-

ing his response to a stinging 13-page reprimand from Vatican authorities over his unconventional views on homosexuality and its place in church doctrine. Taken together, the three controversies brought a fresh focus to the old debate over what is considered permissible sex for Christians.

For Richards and Ferry, the theological issue paled beside the personal anguish that both men expressed over their dismissals. In Ferry’s case, the Toronto-born minister appears to have lost on all counts. Ferry’s partner ended their relationship two months ago—fearful, according to the minister, that his homosexuality would be exposed. His lover’s departure left Ferry, in his own words, “deeply depressed and very angry.” In Winnipeg, meanwhile, Richards said that he had closely followed Lutheran policy on homosexuality by strictly avoiding all sex for more than a quarter of a century—a course, he said, that he now regrets. “Celibacy is supposed to energize a person,” the Lutheran minister told Maclean’s. “It doesn’t. It is depressing; it is life-denying. I wouldn’t recommend it to anyone.” For both clerics, conflict with their churches is the latest chapter in a struggle to reconcile faith and sexuality. For his part, Ferry, who was briefly married in the 1970s, told the ecclesiastical court last week that he did not consider himself a homosexual when he was ordained in 1981. He acknowledged, however, that he was aware at the time of two-year-old

guidelines issued by Canada’s Anglican Bishops which made it clear that homosexuals could be ordained only if they promised to be celibate. And he conceded that when he began his homosexual relationship, he kept it secret from his parishioners at St. Philip’s-on-the-Hill Anglican Church in Unionville, just north of Toronto. Then, last summer, Ferry learned that some parishioners had discovered his secret and intended to demand his removal. With that threat hanging over him, Ferry met his bishop on July 9 and confessed that he was gay. But Ferry refused either to end his homosexual relationship or to voluntarily resign. Finlay responded by relieving Ferry of his duties. The Toronto bishop then announced Ferry’s dismissal—and the reasons behind it—in a written statement that was read to Ferry’s congregation the following Sunday.

The minister swiftly fought back. Within two months of his firing, he filed a civil lawsuit against the Toronto diocese and Finlay— claiming total damages of $600,000 for alleged breach of confidence and wrongful dismissal. In September, Finlay announced that he was putting Ferry back on the church payroll and referred the case to a bishop’s court, a rarely used forum for the trial of clerics accused of breaches of church law. A panel of five Anglicans, headed by former Ontario chief justice

William Parker, will decide if Ferry’s actions violated his oath of obedience to his bishop. If it finds him guilty, the panel will recommend a form of discipline to the bishop—ranging from a reprimand to dismissal.

In his appearances last week, however, Ferry was clearly unrepentant. He told the court that he saw no conflict between his sexual practices and his vocation as a clergyman. Instead, he attacked the official Anglican view that it is a sin for a minister to practise homosexuality—although it is not a sin to feel homosexual urgings. Declared Ferry: “How can one say that one accepts people regardless of sexual orientation and then not allow any possible expression of that orientation?” His eyes reddening and his voice sometimes cracking with emotion, Ferry accused his church of hypocrisy. Declared the cleric: “I know bishops who have gay clergy couples over for dinner. I know bishops who have been to their homes. Everything is fine as long as no one explicitly states anything.”

Meanwhile, in Winnipeg, Lutheran Richards was weighing the consequences of almost three decades of trying to live within the guidelines set by his denomination. By his own account, Richards conducted a homosexual relationship for seven years, between the ages of 16 and 22, but gave up sex entirely when he entered a Lutheran seminary in 1962. Noting his church’s view that active homosexuality is sinful, Richards said: “It seemed that religion pulled in one direction and sexual practices pulled in the direction of chaos. So I cut myself off from the sexual aspect of my life.”

Indeed, Richards insists that he remained celibate even after his 1967 marriage. He says that his wife, Nadine, was badly abused by her former husband and welcomed a sexless partnership. The couple have two children from Nadine’s previous marriage and have adopted five others.

Richards’ compromise with his sexuality began to unravel when his congregation at Sherwood Park Evangelical Lutheran Church, in the eastern part of Winnipeg, learned last month that for three years he had been working part time at the city’s Metropolitan Community Church, which ministers to gay men and lesbians. The parishioners initially accused Richards of violating a church bylaw that requires ministers to seek the approval of their parish before taking on outside work. In response, Richards told his startled congregation that he had been a nonpractising homosexual for over 25 years—and refused to give up his outside ministry. On Jan. 26, Richards’ parishioners voted 91 to 73 to remove him from his pulpit. “For all these years, I’ve denied a core of my nature,” observed Richards last week. “I resent that.”

The debate over the place of homosexuals in the church turns, in part, on what motivates

Antagonism between the two groups has divided other denominations in the past. The General Council of the United Church of Canada grappled publicly with the issue in 1988, but failed to reach a consensus. Still, the council agreed that United Church membership was

open to all committed Christians, and that all members—including practising homosexuals—are eligible for ordination. That deeply controversial decision led to the defection of thousands of United Church adherents, including Rev. John Howard, who left his ministry at Collier Street United Church in Barrie, Ont., to help found a new Congregational parish, the Bethel Community Church, in the same city. Howard told Maclean ’s that he struggled for years with homosexual tendencies, which he eventually overcame. Added Howard: “I feel that the Bible is very clear that homosexual activity is a sin in God’s eyes.”

That is also the clear view of the Roman Catholic Church. As recently as 1986, the Vatican reaffirmed the doctrine that homosexuality is “an objective disorder” that tends

“towards an intrinsic moral evil.” Ottawa’s Guindon, who teaches theology at St. Paul University, challenges that opinion. In his 1986 book, The Sexual Creators, Guindon asserts, among other things, that gay males “have a special vocation ... to teach North American males how to experience the quickening of loving feelings.” The Vatican replied to Guindon’s assertions on Jan. 29 with a resounding denunciation of the Canadian theologian. In its letter, the Vatican’s Congregation for the Doctrine of the Faith accused the priest of “serious and fundamental disagreements” with the teaching of the church. Indeed, the Vatican wrote that, from Guindon’s view, “a homosexual relationship would seem to be superior to a heterosexual relationship.” If the cleric fails to bring his public views into line with those of the Vatican, he could face discipline— including the possible withdrawal of his teaching rights.

The priest, who is on sabbatical until May, declined to comment on the controversy last week. But his confrontation with the Vatican has created sharp divisions among local Roman Catholics. Rev. Hubert Doucet, dean of theology at St. Paul University, insists that Guindon “is not criticizing the doctrine.” Instead, Doucet said, “he is trying to understand what makes sense for Christians in the life they’re living in the 20th century.” But Ottawa resident Sylvia MacEachem, secretary of the Saint Brigid’s Association, a conservative Catholic lobby group that complained about Guindon to the Vatican authorities, takes a much dimmer view. Drawing a link between the theologian’s teachings and the recent rash of Catholic priests who have been charged with 'Ç sexual abuse, MacEachern declared: § “It’s not surprising that some priests I think sodomy is acceptable if that’s s what moral theologians teach.”

I For Toronto’s Ferry and Winni| peg’s Richards, the future is now as " uncertain as it is for Guindon. Richards, who was working on a severance settlement with his church last week, is free to work for another Lutheran parish— although he expresses some doubt that any will have him. Ferry, who is seeking reinstatement, will have to await the recommendation of the bishop’s court that is expected to complete its hearings this week. But already, the Anglican minister has questioned the extent of the bishops’ moral authority over his sexual practices. “To tell me that I should stop loving another human being,” Ferry told the court last week, “is beyond the scope of any human being— including a bishop.” But even if the court ultimately agrees with Ferry on that point, it may still reserve the right to bar him from the pulpit if the object of his love is another man.

BRIAN BERGMAN with DON McGILLIVRY in Winnipeg and E. KAYE FULTON in Ottawa 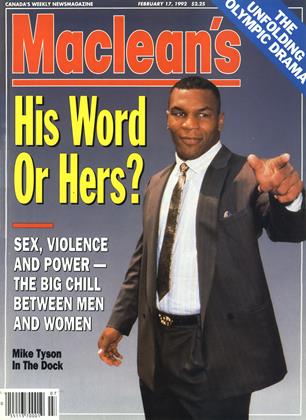