For hockey fans who thrill to body checks and slapshots, the battle of the press conferences last week was a dispiriting spectacle. Months of negotiations between the National Hockey League’s owners and players over a new collective bargaining agreement had deteriorated into a tedious war of words, with no home team, no favorite and, apparently, no winner. The antagonists, NHL president John Ziegler and players association executive director Bob Goodenow— both lawyers from Detroit— faced off behind closed doors and interpreted the results at separate news briefings. But for all the insults, take-it-orleave-it edicts and predictions of doom, there remained among fans, players and owners a faint hope that the 75th-anniversary NHL season might somehow resume. Like a miraculous third-period comeback, that hope proved justified late last week when Ziegler and Goodenow shook hands on a new contract, ending a 10-day strike that had rocked the game to its foundations.

The last-minute meeting of minds staved off a future of lost revenues and, potentially, lost fans. As they neared a 3 p.m. Thursday deadline to accept the owners’ final offer or lose the season, many players, including stars Wayne Gretzky of the Los Angeles Kings and Mark Messier of the New York Rangers, asked Goodenow to find some way to restart talks. The owners, meanwhile, allowed the deadline to pass without officially announcing that the season was over. That narrow opportunity spurred Goodenow to fly to New York City for Friday meetings that lasted 14 hours and forged the new deal. “It was truly a matter of negotiation and compromise,” Goodenow said, “and it worked to both sides’ satisfaction.” The players had asked for a three-year contract, retroactive to when the last contract expired last September. But they settled on a two-year deal. In return, the owners acceded to the players’ demand for full rights to market their images on trading cards and other

products. Playoff bonus money would rise to $7.5 million from $3 million, and negotiators worked out a compromise on disability benefits. As well, the deal calls for a new playermanagement committee to examine the problems facing the hockey business. Said Ziegler: “The players agreed to start listening to our

clarion call that the business is in danger.” The mutual desire to return to the ice overcame the undeniable bad blood between players and owners. For two days preceding the settlement, the owners had openly attacked Goodenow, claiming that he had misled the players and had no intention of negotiating a settlement. They argued that his real motivation was to challenge the league’s free-agency regulations, which restrict a player’s ability to change teams. That fear loomed larger last week when a Minnesota court ruled against the league’s bid for an exemption from antitrust laws in the absence of a collective bargaining agreement. NHL spokesman Bill Wilkerson said that “Goodenow and those other Yankee lawyers” were threatening Canada’s game.

The players, meanwhile, accused the owners of bargaining in bad faith. They said that they had agreed to owner demands on pension funding, certain limits on free agency and the addition of four games to the regular schedule to pay for increased fixed costs. But they contended that the owners’ final offer and Ziegler’s teary-eyed appeal for a settlement were carefully orchestrated ploys to curry public favor and bust the union. “Ziegler and the owners,” said Montreal forward Mike McPhee, “seem to be a lot more worried about getting the fans and the media on the owners’ side, rather than negotiating a contract.”

In the end, however, there was relief all around. Fans in some NHL cities celebrated in the streets. Players, whose 560-to-4 strikevote solidarity was matched by their almost universal discomfort at jeopardizing the playoffs, were openly ecstatic. “We wanted to get back to the game we love,” said Bill Ranford, goaltender for the Edmonton Oilers. The owners, faced with the immediate loss of playoff gate and TV revenues, welcomed the resolution as well. Said Winnipeg Jets president Barry Shenkarow: “Both the players and owners didn’t want to deprive the fans—and remember, the owners and players are also fans.”

Their relief may be shortlived. The owners say that they expect to lose $50 million in the 1992-1993 season because their revenues cannot keep up with player salaries, which have increased by 58 per cent over the past two years. The owners will likely Q> seek terms in the next contract that would limit player salaries. Early in the strike, z Ziegler agreed that it was the 1 owners’ competitiveness that “ had driven the average NHL I player salary to $379,000 ang nually, and that the owners o needed protection from £ themselves. If they do not get it, the owners could lock out the players after the latest deal expires on Sept. 15,1993. “This is not a victory for the owners because we will lose a lot of money with the deal we have made,” said Marcel Aubut, president of the Quebec Nordiques and a hard-liner throughout the talks. “It will be disastrous for some teams.”

At their joint announcement last week, the once-bitter adversaries seemed almost friendly. “In something like this, you fight to win,” Ziegler said. “But when all is said and done, you shake hands and you can be friends.” For all the post-settlement niceties, however, the strike showed that the players are now prepared to flex their muscles off the ice as well as on it, and Canada’s game may never be quite the same. 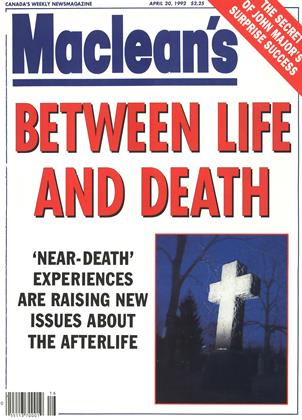